Brady And Monica To Face Off in Epic Verzuz Battle

R&B singers Brady and Monica will face off in Epic Verzuz Battle on Monday.

The iconic duo will be performing live on Monday, August 31 at 8pm ET on Apple Music and the Verzuz Instagram account.  The Verzuz episode will be streamed live from Tyler Perry’s Studio.  Both singers have been teasing the event on social media, and have been asking fans on what songs they should perform during the battle.

1 week until this magical moment with @monicadenise!!! We’re celebrating the love of music and want you to feel a part of the experience. Comment below with your must hear songs! @verzuztv @applemusic

“Get ready for the queens! @Brandy and @MonicaDenise on #VERZUZ!” the official Verzuz Instagram posted.

Brandy released her new album B7 in late July; it was her first album in 8 years. Monica’s latest studio track was Code Red, which was released in 2015. 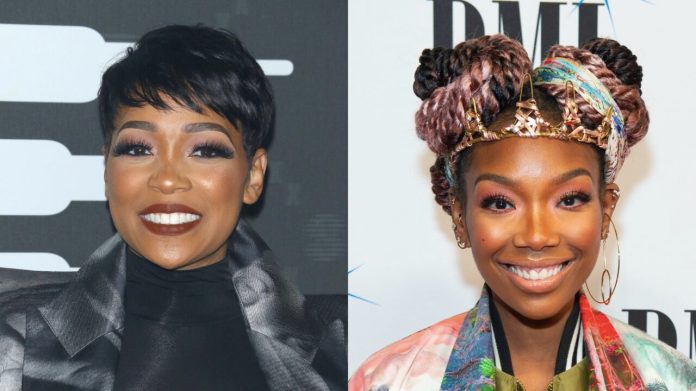 showdown coming up, fans and spectators recall the artists’ unique history together.  The singers’ collaboration on their 1998 R&B smash hit “The Boy Is Mine” led to their friendship to become conflicted, to say the least.  In 2012 the pair reconnected to record “It All Belongs to Me,” a women empowerment anthem.  The heat between the pair has seemed to cool off throughout the years, and fans are excited to see the proof in the upcoming Verzuz Battle.

“What songs would you all like to see us bring to @verzuztv!! Celebrating these catalogs is for the culture with love! From Young Women to Adult Women we’ve been with y’all! Name the songs you love,” Monica posted on her Instagram.