The Newest and Most Controversial Shoe on the Market: The MB1

We have a new signature shoe in town folks, courtesy of the Big Baller Brand. LaVar Ball and Triple B have announced their latest release, the Melo Ball 1. 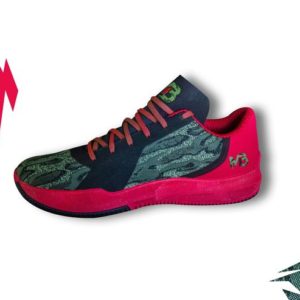 The Melo Ball 1 or MB1 is the debut sneaker of the youngest Ball brother, LaMelo Ball. LaMelo is only 16 and a junior in high school, making him the youngest and first ever high school athlete to ever have their own signature shoe. The shoe is very colorful, has red and black bottoms and a flyknit camo upper. Features the BBB logo on the tongue and midsole making sure to represent the brand. It’s another genius headline-making idea by LaVar Ball, but like always with him, there is some controversy with the shoes.

The release of the Melo Ball 1s could actually ending up hurting the youngest Ball, atleast college wise. Their is a strong possibility that these shoes could end up ruining LaMelo’s eligibility therefore not allowing him to play for UCLA, the school he is already committed to. LaVar isn’t too pressed about that.

“We’ll worry about it when we get there. Who cares?” LaVar Ball told ESPN.com. “If he can’t play, then he can’t play. It doesn’t mean he’ll stop working out and getting better.”

The NCAA is funny for this one. LaMelo won’t be under the NCAA’s umbrella for two more years and they are already trying to put sanctions on him. To me, LaVar Ball isn’t in the wrong at all and who cares if it makes him ineligible. He has the opportunity to make thousands of dollars for his son and the rest of his family right now and he should give that up so that LaMelo can make millions for UCLA in a few years and not see a dime of it? It’s an easy decision, continue to make your coin and revolutionize the shoe game Mr. LaVar.

To further promote LaMelo’s shoes, Laker point guard and his older brother, Lonzo Ball, dropped his debut single named after the shoe. On the track, he gives props to his younger brother on being the youngest ever while also shouting out the brand.

If you’re a big baller and interested in a pair of MB1s, you can order them here for a sweet $395, the triple B way!

For more of my opinions on the Ball family or anything basketball, follow me on Twitter: @_WhyToby