The term “hybristophilia” by definition is a sexual interest in and attraction to those who commit crimes.

On TV shows and movies, you see, there is this fascination of a tall, dark, handsome, and mysterious character with a questionable background that draws viewers in. The grade A “bad boy” so to speak where they are basically applauded for their “flawless” good looks that come with the notion that someone good looking can do no evil. Looking beyond the evil acts they commit and trying to find a sliver of hope they can change their ways. For instance, Joe Goldberg is the main character in the Netflix series You. In the series, he stalks girls he believes are perfect for him. If they do not reciprocate the same feelings to him, he kills them and anyone else that gets in his way. Quite a lot of girls romanticize this character because even though he does murder people he still has time for a relationship. Never looking at how everything these types of characters do is morally wrong much like the actual real-life serial killers/criminals. 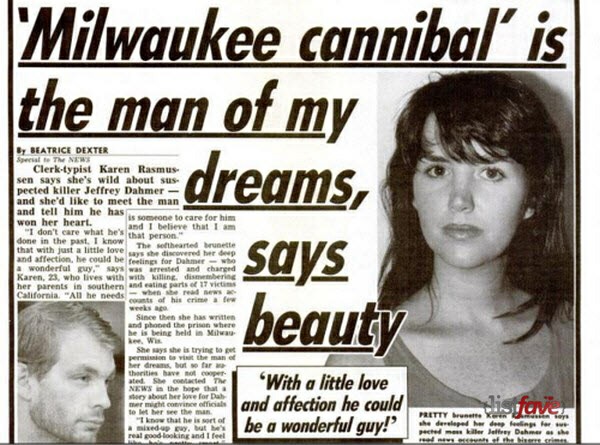 All over social media, you see people typically young girls, romanticizing, or “fangirling” about these men who committed serious crimes. Crimes usually ranging from the kidnap, rape, and murder of young women and men, but yet, still find them attractive and fantasize about relationships with them. Famous and notorious serial killers/criminals like Ted Bundy, Richard Ramirez, and the Menendez Brothers.

Ted Bundy killed and raped over 30 women in the 1970s. During his trial with how gruesome the murders were and how many women he killed everyone knew the name Theodore “Ted” Bundy. His victimology made us aware that he went after the same type of girl: caucasian, tall, and brunette. When the trial was open to the public and you were able to sit in the courtroom. Women would present themselves as Ted Budy’s victims, women who were white, tall, and had long brunette hair. They tried to make their hair the same way as the victim shown, in order to get his attention in the courtroom.

Much like Ted Bundy, Richard Ramirez had a “fan base” as well. Ramirez was convicted of multiple murders, attempted murders, sexual assaults, and burglaries in the 1980s. Women would also show up to his hearings, write him fan mail, and now on TikTok make sexualized video edits. Romanticizing him in a way that disregards all of the criminal acts he committed.

The Menendez Brothers are a different story, they were convicted of first-degree murder for the killing of their parents. The brothers are not classified as serial killers, but because they committed a crime, women and young girls are attracted to them on that fact alone.

The romanticization of serial killers is a facet of media that needs to be looked at better. Fantasizing about someone who is more likely to murder and kidnap you, than take you on a date is not something that should be constantly sexualized. Especially, with the safety of young women in this day and age where sexual violence should never be tolerated or romanticized, ever.

Previous ArticleLil Nas X Is Gifting Fans With A New Track And A Performance On SNL
Next ArticleUnder The Radar : Euro Gotit
NIPSEY HUSSLE TUC RECAP