You Can Hate it, but Durant Made It

The finals are over and Kevin Durant has successfully secured his first NBA championship as well as being named the Finals MVP. It would seem that the superstar has accomplished all of the goals he set for himself this year, but at what cost?
Durant lit the biggest firework of the day when the news of him moving to the Warriors released on July 4th, 2016. This news came shortly after Durant and the Oklahoma City Thunder had suffered a devastating loss to the Warriors, blowing a 3-1 series lead. Following the news of his move to the Golden State Warriors ,the Internet exploded with videos and images of furious OKC fans burning their Durant jerseys. 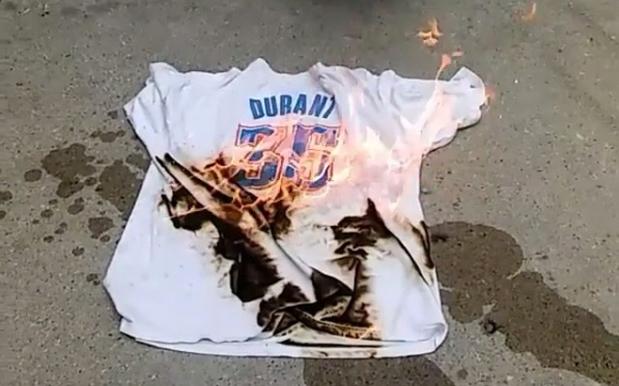 The 2016 Warriors, whom had just lost to Lebron’s Cleveland Cavaliers, were looking for revenge in the coming season after setting a record of 73 regular season wins in 2016. It was thought that the addition of Kevin Durant would have been the missing variable in the solution to defeating the Cavaliers in 2017. This proved to be true, but no good deed goes unpunished.
It did not take long for Durant to receive criticism from OKC fans, league commentators, and even his teammate and ex-best friend Russell Westbrook.
It seemed that anytime Kevin Durant was the topic of discussion people were making a point about how he “couldn’t beat them so he joined them” or something else along those lines. Of course Stephen A. Smith had a field day tearing Durant apart, but some of the more notable criticisms came from guys like Doc Rivers (head coach of the Clippers), Reggie Miller, and Charles Barkley who said he was “disappointed in Durant.”
With so much heat from the opposition you would think Durant would’ve had regrets and might even be discouraged during the 2017 season but with great teammates such as Steph Curry and Draymond Green (and of course his mother) to rally around him and remind him that in the future all they’ll remember is the ring .Durant was able to achieve his goal of winning a NBA championship and silence most of the haters in the process.