Reeboks Classic Leather Sneaker launched in 1983 as a response (in part) to the Nike Cortez, the Reebok Classic was formally used/known as a running shoe, as the years passed the shoe became a staple in the fashion world. Today, many artist and fashion influencers such as Teyana Taylor, Kendrick Lamar, Future and model Gigi Hadid have all joined the Classic Leather campaign. Within the last 12 months, Reebok has teamed up with the stated celebrities and continues to push the “Classic Leather” campaign with the help of these artist. Their newest recruit, hip-hop duo, Rae Sremmurd happens to be the perfect fit for their advertisement! As a result, to better market their shoes Reebok bosses have a roster of fashion-conscious hip-hop stars to promote their shoes. We can only expect bigger and better things from the company as they will continue to work among the most influential hip-hop artists, and the bosses are hoping Rae Sremmurd and their stylish ways will boost their brand. 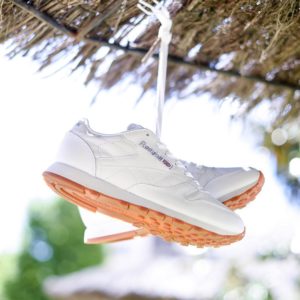 “Swae and Jxmmi are the perfect partners for the Classic Leather. These guys are constantly pushing boundaries, which Reebok Classic is all about,” said Todd Krinsky, General Manager of Reebok Classic. “Few artists so passionately embrace life and nonconformity like Rae Sremmurd and we’re excited to bring them into the Reebok Classic family.”
Reebok announced its deal June 2nd with the “Black Beatles” rappers, and to start off the campaign Rae Sremmurd is traveling through New York City in a Reebok Classic Leather themed truck. The duo is handing out the iconic sneaker for free in block party style events. This is the first time a company has taken such an approach to market a shoe. Keep your eyes out for Swae Lee and Slim Jxmmi as during the duo’s tour run of festivals this summer. The Classic Leather sneaker is originally retailed for $75 and can be bought on Reebok’s website. The brothers are responsible for promoting, as well as increasing exposure for the brand with 3.8 million followers on Instagram, it’s an easy reach. The artist have been busy not only maintaining their new deal with Reebok but have announced “Sremmlife 3” on the way! So, keep an eye out for that release date as well.

Previous ArticleConor McGregor Vs Floyd Mayweather
Next ArticleYou Can Hate it, but Durant Made It
NIPSEY HUSSLE TUC RECAP