Last Tuesday night in Couva-Trinidad will be forever allied to one of the most epic failures in American soccer history. USA soccer team went through a soul-crushing 2-1 defeat to a last-place opponent Trinidad and Tobago, causing the U.S to miss the World Cup for the first time since 1986.

Omar Gonzalez, the U.S defender, scored the hosts’ first goal into the U.S. net for an own goal in the 17th minute of the match. It demoralized the entire team which eventually led to a total control of the midfield by Trinidadians. In the 36th minute, Trinidad added the second goal with a spectacular 35-yard shot by Alvin Jones. Christian Pulisic, the Americas’ rising 19-year-old star, then scored in the 47th minute, giving the U.S. hope, but it wasn’t enough.

The U.S players had total control of their destiny when they entered the game; in order to advance to an eighth consecutive World Cup, they only needed to either tie or win the game against Trinidad. However, what was expected to be a celebration night, turned into the worst nightmare for the players, the coaches, the federation, the staff, and the fans of course!!

“It was a night where everything went wrong,” Michael Bradley said after the game. “You can go around in circles a million times, but the reality is that it was all there for us and we have nobody to blame but ourselves.” He added. The head coach,Bruce Arena, also took responsibility, “It’s a blemish for us,” He stated. “We should not be staying home for this World Cup and I take the responsibility for that.” Three days later, he resigned as the U.S men’s national team head coach. 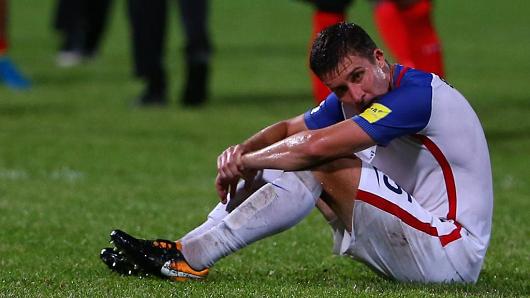 But disqualification wasn’t necessarily due to Tuesday’s game loss, it was a long series of errors and miscalculations over the last 12 months for all of the U.S team’s games; totaling to just three victories in 10 qualifiers.

It’s definitely devastating for every American Soccer fan that the U.S won’t participate for the next World Cup, but the worst part is yet to come! U.S. Soccer will miss out on at least $10 million in prize money awarded to each country at the World Cup. Additionally and according to the LA-times, not playing in the World Cup could cost U.S. Soccer and its sponsors more than $250 million in lost endorsements. Fox Sports, which paid more than $400 million for the English-language broadcast rights to the 2018 and 2022 World Cup, will also take a financial bath!!

Previous ArticleTUC Feature : Alvester Martin, 'Love Him or Leave Him'
Next Article‘Tis the Season for Trendy Nail Colors for the Winter
NIPSEY HUSSLE TUC RECAP