Joel Embiid has only played 31 games his entire career. Well apparently, that’s all the Sixers needed to see. Over those 31 games, Embiid averaged 20 points and nearly eight rebounds. Yes, on paper those number might not seem to be worthy of a max, but Embiid’s worth is in his impact. When Embiid is on the floor, the Sixers look like a completely different team. And his impact extends to off the court too.

Embiid might just be the funniest athlete in NBA history. It’s his hilarious antics that have made him a fan favorite and one of the most popular players in the entire NBA. He’s also a great social media follow, easily tops among NBA players. 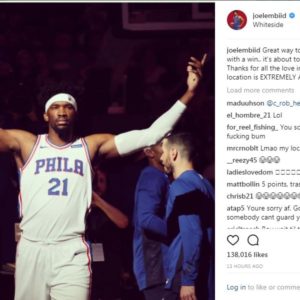 Dude they had to take your ass out or you would’ve fouled out in 5 min… And we’re talking about Preseason, not regular season….. #Softy https://t.co/IAIBDDypFK

And keep caring about stats and not your team success….. your +/- was ass @youngwhiteside #Softy

My bad y’all , I thought I was using my burner account #TheProcess

Now the question is can Embiid remain healthy. If he can, Philadelphia has the NBA’s best big man for the next five years. If not, the Sixers are going to regret trusting the process.

Update: Philadelphia 76ers head coach, Brett Brown, is going to do everything in his power to ensure a healthy season for his new 148 Million Dollar man as he announced yesterday during his media availability that Embiid will be playing limited minutes at least until January.

Previous ArticleNext Up: Jasmine Villegas is Ready to Show The World What She's Made Of
Next Article2018 Can't Come Soon Enough After The New "Black Panther" Trailer
Comments (5)
NIPSEY HUSSLE TUC RECAP