Wins & Losses Is A Win

It’s perplexing to think that Dreamchasers dropped 6 years ago. Back in 2011 when Big Sean put Detroit back on the map, Kendrick earned the spotlight over in Cali, and hip-hop legends Kanye West & Jay-Z dropped the hottest Chicago/New York City collaboration to date, Meek Mill made Philadelphia shine bright on the map once again. The most influential part of his music was that it came during a time where the top wasn’t the only thing being exemplified. Hip-hop has always sold because of the growth it represents but in Meeks case, he literally came from, and was talking about coming straight from the bottom. Rather he was noted as a street or battle rapper, he was inevitably one of the nicest rappers in the game.

The American flag wasn’t the only thing waving during the 4th of July weekend. Meek Mill released the sequel to his mixtape series, Meekend Music, featuring YFN Lucci and Mike WiLL Made-It. Fans become ecstatic any time new music drops and if it’s actually rotationally satisfying, we began to anticipate what’s next even more. Meekend Music II featured 4 hard hitting songs that provided a whole lot to say in such a short amount of time. In many cases, hip-hop heads would deem short EP’s like this as “throwaway” music. But when the “throwaway” music is hypnotizing, the thought of an album is like a breath of fresh air after being underwater for a few minutes. The timing of this release was also key because unlike Dreams Worth More Than Money & 4/4, his personal life seemed to calm down enough, allowing the music could actually speak for itself once again.

Just days before the album release, Meek Mill dropped Wins & Losses: The Movie, directed by Spike Jordan. The movie installment was broken into 4 separate pieces: “The Rebirth”, “The Trap”, “The Price”, and “The Homegoing”. The promotional movie felt like a BET classic. Wins & Losses: The Movie takes us through the conflicting realm of life and death, and the circular motion it continuously goes in. The movie features all vocals from Meek Mill, highlighting tracks we would later hear on the album such as “We Ball” featuring Young Thug and “Price”. With this visual, Meek Mill showed the true definition of a loss. The messy business with Drake and Nicki is nothing compared to the feeling of losing a family member or a homie. In just 26 short minutes, viewers are taken on a trail of tears that eventually ends in sunshine.

Somewhere along the lines, Meek got a real taste of how shaky loyalty can be when he shot Twitter fingers with Drake. Between the beef with Drake and snubbed relationship with Nicki Minaj, fans have been deeming Meek Mill as the king of all L’s. It’s clear that his personal and social life are not reflective of how he portrays himself in his songs. But we all know one thing for damn sure’ he’s always been extraordinarily nice at rapping. Wins & Losses, released on July 21st, 2017, symbolizes the reality of the impossibility concerning living life with no losses. Instead of dwelling on the things that didn’t play out correctly, its way more beneficial to take everything as it is, learn from it, and move on whether it be good or bad. Wins & Losses, musically, was Meek telling us that despite what he’s going through, he’ll always be good and always be him. It’s easy to get caught up in what’s going on with an artist outside of the studio. This project for Meek, showed and amplified what really matters; the music. 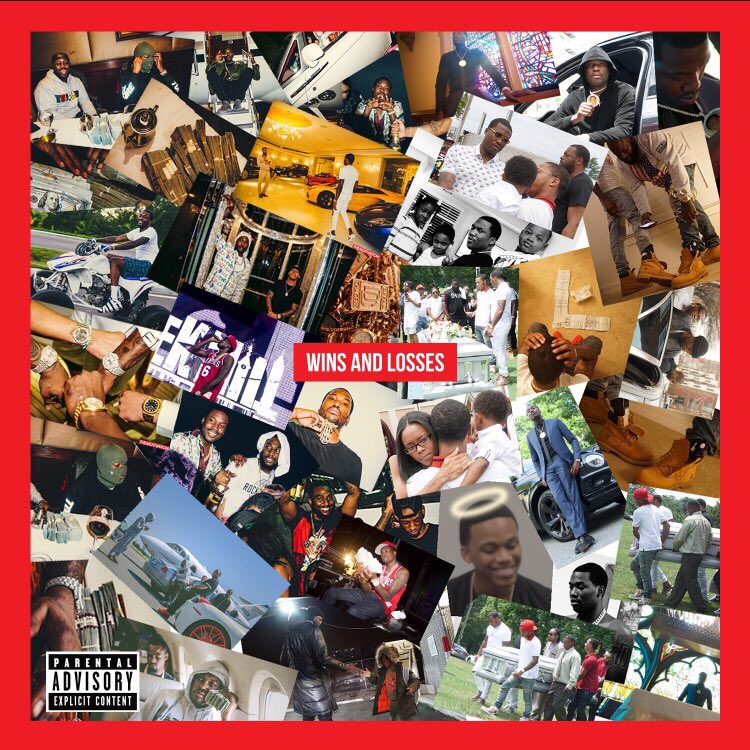 This album was destined to be valid from the singles. Singles don’t necessarily tell the album but in most cases, especially recently, the singles are either a lot better or a lot worse than the actual album. “Glow Up”, released on May 22nd, was classic Meek. People will of course begin to mention his loud tone but Meek is the definition of providing balanced amount of energy and content, in an industry where songs seem to be nothing but energy. The second single to drop, “Whatever You Need”, was insane in terms of execution and production. Sampling Tony! Toni! Toné!’s “Whatever You Want” from 1990, “Whatever You Need” was the perfect combination of hood love and hood character. You couldn’t go wrong with a lineup consisting of Meek’s label mate TY$ & the chorus king Chris Brown. Serving as the #11 urban song in the country, “Whatever You Need” was just the first to confirm that the entire album would be dope. The third and final single, “Young Black America” was released on June 24th, featuring The-Dream, sampling Jay-Z’s “Blueprint (Momma Loves Me). Instantly we received three very different versions of Meek so although we knew it would be acceptable content, we didn’t know for sure he was about to be on.

This album provided one of the most successful promotional rollouts we have seen all year. From the EP to the movie, and the singles. This album was destined to hit harder than a cigarette to a nonsmoker. This album to Meek Mill felt like shooting someone in the streets, and then finding out later in time that they are still alive. When you think someone is dead, they represent themselves even more alive than they were before. Despite the gassing of the public, Meek died but learned how to turn his loss into a win. Tracks like “1942 Flows” shows the maturity of a grown man and eliminates the separation between the streets and the fame, because they certainly can work together. Like any other real one, wins and losses are inevitable parts of the script.

There are a few bangers on the album such as “Fuck That Check Up” featuring Lil Uzi Vert and “Ball Player” featuring Quavo but the real heat is in the message. In this case, the music is the only thing that can do the talking. The promotion and lyricism in the album is motivation in its rawest form. Meek constantly uses vocals from motivational speaker Eric Thomas who singlehandedly has been able to change lives based on introducing and enhancing perspective. Most rappers are so pleased to be on an elevated level that in their music, struggle seems to be far gone. One thing that will always elevate Meek is how humble he is, especially with the reality that he has never stopped talking about the raw shit. It takes someone special to give us songs like “These Scars”. Whether you make it out on your own, that doesn’t give a legitimate reason to leave millions of young black men, going through the same things, behind you. Wins & Losses is a brief summary of the street bible. If you haven’t streamed the album yet, do so now via Apple Music or Spotify below. But do know before you click, pain and joy will blast out of each headphone.