One of animation’s greatest and longest-running rivalries made its way to the big screen this past weekend, as Tom & Jerry – also referred to as Tom & Jerry: The Movie in some locations – hit theaters and became available to stream on HBO Max as part of Warner Bros. Studios’ same-day movie release deal with the streaming platform. A mix of live-action and computer animation, this would mark the duo’s second theatrical appearance since 1992’s Tom and Jerry: The Movie which was completely animated.

While the film does include our favorite cat and mouse pairing, most of the plot revolves around ‘down on her luck’ Kayla Forester, who has just finessed her way into working at the high-end New York-based Royal Gate Hotel. Kayla, played by Chloe Grace Moretz (The Amityville Horror, Kick-Ass), finds herself biting off more than she can chew as she is suddenly put in charge of getting things together for the wedding event of the century. However, she’ll first have to handle a little pest problem brought on by Jerry’s new residency at the hotel and the chaos that ensues when she brings in Tom for backup.

Relying heavily on the slapstick humor that the iconic duo is known for, the movie feels very lighthearted in tone and color. Recurring visual gags between the two of them bring a feeling of nostalgia to anyone familiar with the cartoons. To keep with the difference between live-action and animation, rather than just animating our titular characters, most of the animals in the movie are also illustrated. This allows for more outrageous sight gags, as well as the inclusion of other recognizable and fan-favorite characters, such as Butch, Spike, and that one female cat that Tom tried to woo over in several episodes – cue Louis Jordan’s ‘Is You Is or Is You Ain’t My Baby.’

The film also utilizes two classic tropes within Tom and Jerry’s dynamic, having them act as enemies for the majority of the opening act, followed by making them dysfunctional best friends leading towards the movie’s end. Although enjoyable, the movie does suffer the flaw of paying more attention to its human characters than it does to our titular heroes. The plot mostly moves forward as Kayla tries to make up for the trouble that Tom and Jerry’s constant bickering causes for the hotel guests, rather than focusing on them. 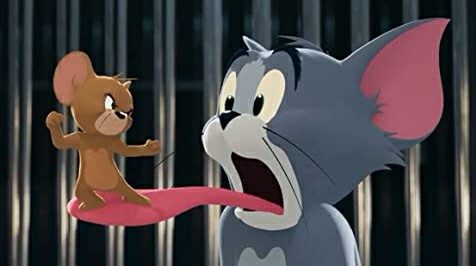 Outside of this, the movie does include a very diverse set of characters. Michael Pena (Antman, End of Watch) plays Terence, Kayla’s boss, as well as the event manager of the Royal Gate Hotel, Jordon Bolger (David Makes Man, Peaky Blinders), plays Cameron, an eager and helpful bartender, and Ken Jeong (The Hangover, Crazy Rich Asians) plays Jackie, a worrisome and tightly wound Chef at the hotel. Though not given much to do during the film – besides Pena, who becomes a bit of an antagonist near the end – their presence does add more fun to the duo’s shenanigans.

Overall, Tom & Jerry does have its charms, despite the lack of central focus on our favorite cat and mouse themselves. For those looking for a piece of nostalgia – even at a small dose – it’s definitely worth the watch.

Previous ArticleNoname is Back to Rage Against the Establishment in 'Rainforest'
Next ArticleBehind the Art with Jean-Baptiste Seckler:"I Want to be Happy Each Second of My Life"
NIPSEY HUSSLE TUC RECAP