Litchfield, We’re Back! – Orange Is the New Black Season Review

Start turning in your work badges, go get your pajamas, laptop, a nice refreshing glass of lemonade, and get ready; Litchfield’s feistiest dysfunctional bunch is back! That’s right, Orange is the New Black (OITNB) has returned! The Emmy-winning Netflix wonder returned to fans and OITNB lovers at 12:01 a.m. PT. (3:01 a.m. EST) on Friday, June 17th.

If you are not familiar with the series, the show focuses on a collection of women serving prison sentences (for various charges) in the minimum-security Litchfield Penitentiary. While they serve their time, they face different obstacles, attitudes, beliefs, mindsets, personalities, experiences, and incidents that change their lives forever.

This season of OITNB was very fast-paced, thought provoking, and rousing. Compared to season three, this season was more exciting and interesting. While very informative and revealing, season three was extremely boring dragged out, and monotonous. It focused so much on the characters’ background stories and past lives that it neglected their current prison lifestyles and experiences. While season four also displayed the background stories of other characters, it maintained excitement from beginning to end. I feel that it was more consistent than it has ever been. The plot went deeper than Alex & Piper’s on again off again relationship. (Thank God!) It was literally action packed from beginning to end. 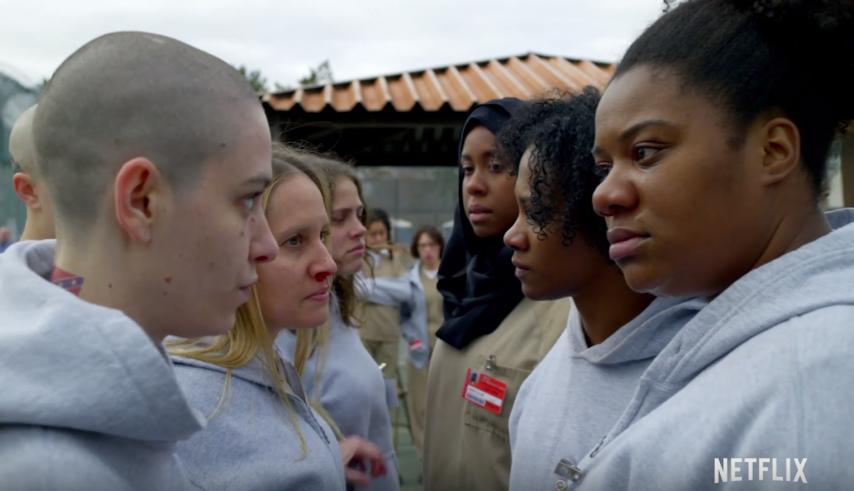 This season also focused on some issues that were not as deeply explored in previous seasons, which caused much cognitive action and stimulation. There was much political spark this season. While maintaining its comical crude humor, there was more focus on the social injustices that occur in this country today. Racism was a very PREVALENT theme seen throughout the season. I personally believe that the writers overdid some of the racial dialect and made it a bit overwhelming. At times it just seemed like the writers depended so heavily on the racial aspect to keep the show pushing. Don’t get me wrong, the dialect was extremely raw and strong, which I felt was great for the show and added a more serious presence to it. In some scenes the words were so strong it felt as if they were being screamed directly at me. The wordplay in this season literally could take you from laughter to anger in an instant. It stimulated my mind. It angered me but it also made me appreciate the art that the actors were exhibiting. You could feel the passion in the writing, plot and acting. Even though there were some funny parts, this season had a more serious undertone that I really respected.

Another issue that I felt was pushed further in this season than in any other was police brutality. This season, the guards were tougher, scarier and creepier then ever. When watching the guards this season, there were moments  where I was disturbed, infuriated, and truly disgusted. I commend the people who played these characters because at some points I nearly hated them. The guards and their lack of concern or care for the inmates played a huge role in the season and you will see that as you progress towards the end. 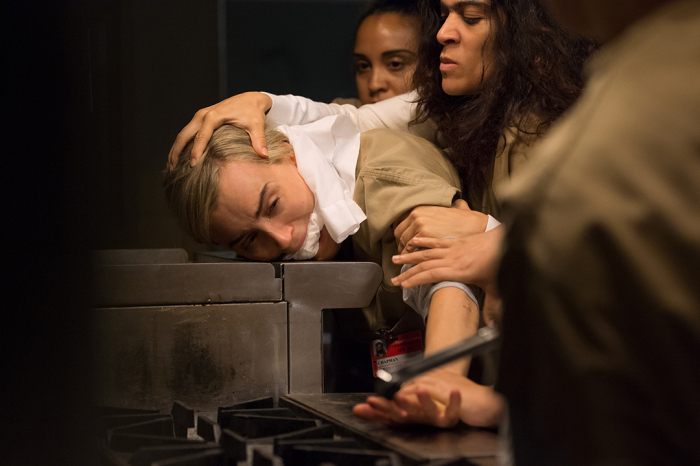 Another issue was that of gangs and gang violence. This season seemed to dwell heavily on these newfound gangs. I appreciated how each theme/issue related to one another. The gangs and gang violence leaned on the racial issue and help to further develop the story as we progressed through these 13 episodes. It also roused my mind visually. In one scene where the Dominicans ambush Piper, forcefully hold her down, and end up ultimately branding her arm, I nearly fell off my bed! The scene was so vivid and frightening that instead of turning away, you wanted to keep watching to see what would happen after that. Besides, the disgusting bunks and showers, sex scenes, drugs, murders, and anything else seen in the show, I believe those additional issues helped to visually strengthen the series to rise to a peak it had never reached.

This season enlisted many new prisoners as well as prison guards. These additional characters reinforced all of the additional issues brought to this season very well.  Again, just as season three did, this season followed in showing the backgrounds of other characters. It gave us a more in depth look at characters like Crazy Eyes, Mr. Healy, Lolly, Baxter Bayley, and more. However, the backgrounds did not overshadow the show this time around. Instead of boring us to near death, the backgrounds helped to explain different characteristics in the characters that we may not have paid much attention to in previous seasons.

A minor part of the show that I really loved was seeing how this season gave more of an inside look inside the maximum-security sector. The show gave us a look at what some of the trials and tribulations inmates like Nicky and Sophia were facing and dealing with while being isolated from the other characters. It made the show seem more realistic. It also was a bit hard to watch at times but it helped further develop the storyline and characters.

This was actually the first season of the series to truly anger me toward the end of the season. In this season, you really see how weird, corrupt, and twisted these new prison guards really are. In some episodes I cringed with disgust at how they treated the inmates and the weird things they made them do. I promise you, this season will really anger you at times. Again, there were some moments in various episodes where I had to sit back from my computer screen, pause the show,  and make myself remember that it was just that, a show. 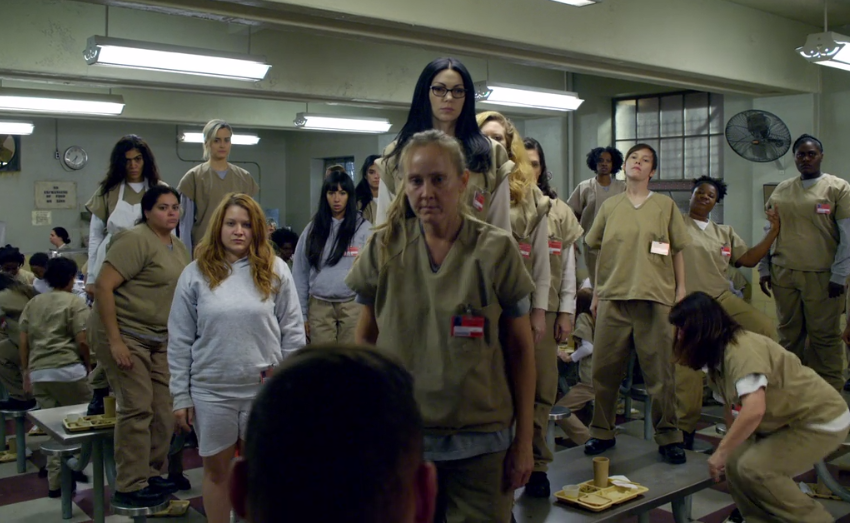 I will not spoil anything for those who have not started or watched the season/ series, but I will say that the ending episodes truly irritated me and even made me yell at my own computer screen. I did not like the route in which the show ended; it left everything hanging on this cliff of imagination in our minds. Questions like, “What’s going to happen now and why did they end it this way?” instantly entered my head. There was a since of confusion and lack of clarity that came with the season’s ending. It seemed like so much was occurring all at one time that I simply could not keep up at moment.

Overall, I sincerely felt that this season was great. It kept my attention, kept me on the edge of bed, and left me wanting more. I thought the acting was actually impeccable in many of the scenes. In terms of acting, the art was truly beautiful. It made you empathize with these characters as if you had been given a prison jumpsuit and lived with them. You could tell that the actors pushed themselves more than they had ever done in the series.

If you’re like me and have already binge watched the series, don’t be sad. The show has already been renewed for 3 more seasons, which will give the show a total of 7 seasons when it is all said and done. OITNB is not going anywhere, but until we are blessed with the next season, just keep watching the previous seasons so that you don’t get lost when it arrives.