NEXT UP: Picking Flowers in a Big Colorful Meadow Describes Flipturn

Since the days of “Hurrian Hymn No. 6” and “Au Clair de la Lune,” music has evoked deep emotions in humans. There’s something about the production of music and the chords used that brings out the best or worst of us. In the years prior to the age of streaming, the music seemed genuine and helped with the flow of connectivity. As we inch closer to a world where we seem to lose our spark, people continue to long for the days of Jimi Hendrix, Kurt Cobain, and lost youth.

With social media comes the muddle waters of artistic ability and freedom to express. While that may seem like a good thing, it also breeds a false narrative of the music industry. Society today gets lost in the quick status of fame and often ends up crashing and burning before launch. From the media outside looking in, flashes of cars and the luxury life paint a pretty picture. With just a few views and “the look,” you too can join the ranks of the elite. Some days we need to turn down the white noise and lay under the technicolor sky and vibe out. That’s where Flipturn comes in.

The best way to describe the indie rock band is along the lines of a cool summer day in a meadow. Their music makes you wanna pick flowers under the sky of a swirling space as comets and shooting stars pass overhead. Over the course of three EPs, Flipturn takes the listener on a journey into the deepest part of their minds and comes out the other side understanding life a little better. They are not shy about their mixing with a combination of sounds to generate an effect all their own.

True Urban Culture Magazine and I sat down with the dream indie rock group Flipturn to talk about what music listeners may not understand about the music industry, how releasing three EPs helped them find their sound, and how the return of live music fuels the soul.

You guys released your latest EP, Something You Needed last year. This marks the third EP from Flipturn since 2017’s Heavy Colors. How has your music style changed over the three distinct projects?

So our first EP, ‘Heavy Colors,’ came out when we were freshmen in college. In terms of that EP, it was a batch of songs that we had finished and put that into an EP. As for ‘Citrona,’ that was written at a time where we were older in college. It was about growing up, I guess. A coming of age sort of EP. And with ‘Something You Needed,’ I feel like we grew and experimented more with strings and horns where we haven’t before.

Each record has been an acknowledgment of where we were before. It’s like having a different mind of what we could do the same, but with a different twist on it.

To this day, “Savannah” is still one of my favorite songs. Although it’s short, its word and production are so powerful.

Actually, Savannah was the intro for another upbeat full song that we had worked on. After failing to get the upbeat part of the song right, we just decided to shorten it and just keep the slow part. 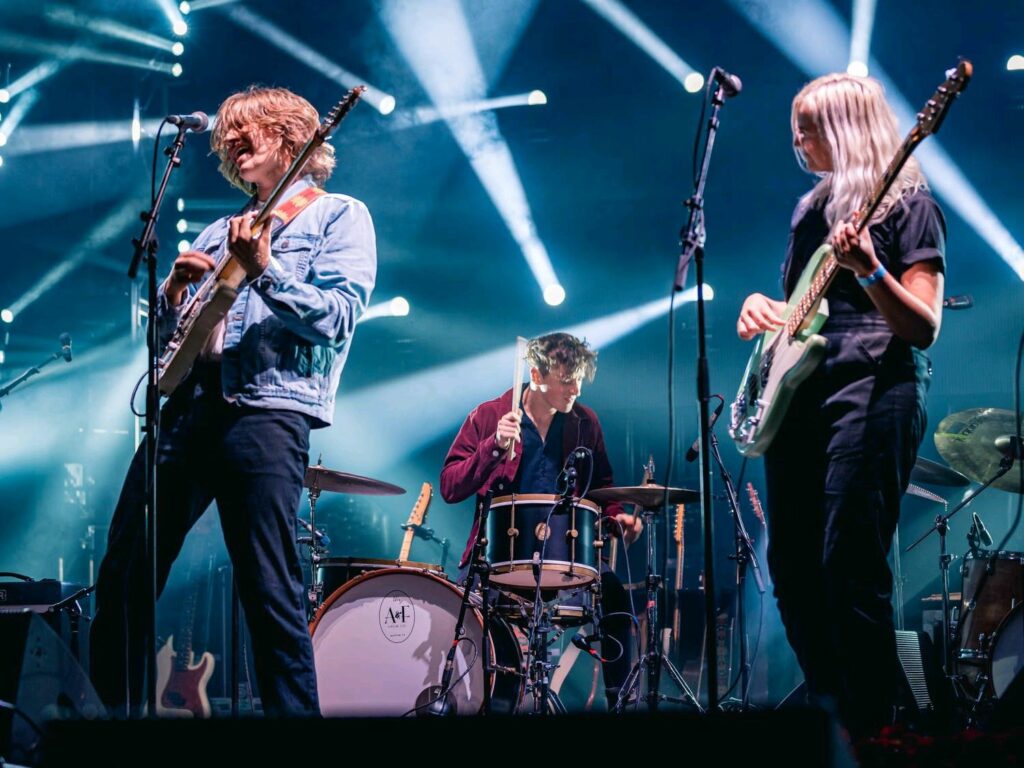 Now, you guys have both a strong female and male presence in your music, something not seen enough in bands today. How has that ability been able to elevate your music above other bands?

There’s a lot of bands that have, you know, musicians that are women. But, there’s not a lot of bands that I know that would have women front and center alongside great male musicians. Growing up, I looked up to Silversun Pickups who has a bass player who is a woman. I just thought that was the coolest thing and she inspired me to actually be a musician.

Dealing with this past year has made the world look inward and more creatively for expression, especially in the music business. So, how has the pandemic changed your perspective on the current state of the music business?

It’s been really interesting to see how it’s evolved just from last year. I had no idea when live music was gonna come back. Now, it’s cool to see how festivals and shows are coming back, like the one we have this weekend. How we’re able to perform in a safe manner for everyone to still enjoy the music and everything. This past year, we’ve been writing a lot and working on this upcoming album. It’s other given us a lot of time to perfect this album. I feel like if we were on the road, it’s a lot harder to schedule time to write as we’re all detail-oriented.

As the past year has given us time to think, what new sounds are you hoping to incorporate into your upcoming project?

This is the biggest project we have ever done. You know, with EPs, we put a lot of work into them but it was always like 3 or 4 songs. Just a fraction of what an album would be. But with an album, there’s a wide variety of sounds on this project. There’s a lot of influences from our previous three EPs. We have songs that mirror ‘Heavy Colors’ or ‘Something You Needed’. It’s more of a quick rest on what would have been on some of those EPs. Working on the album, it feels like we’re just starting to find our sound.

There’s a lot, but one of those always seems to be centered around record labels. If you say you’re in a band, others will ask “oh, you signed?” and that’s not always the case. It’s not that easy,  but it’s not necessarily the end all be all to get on a label. If you do have the great opportunity to get on a label, I say take it. But on the flip side, it’s possible to do great independently. In the end, your legitimacy shouldn’t be based upon if you’re signed or not.

I also think the only people who know the music industry is different than it was 20 or 30 years ago are the people in the business. There are people who listen to music but aren’t involved in these music communities at all. I think they don’t understand at all how drastic of a change it’s been in the last few decades.

You can also be signed to a label and still not have the amount of success as other big names.

Expanding on that further, do you think the music industry is harder now than it was in the 90s, or does the age and convenience of technology makes it easier?

I think it’s both, it’s just different, but harder. The competition is ten times harder I’d say because it’s easier to get your name out there. The rise of Tik Tok and other social media opens a gateway to millions of people. While the competition is harder it more accessible to everyone. I feel like it would be harder for us to continue to do what we are doing right now back in the 90s. Back then, all you could do is sell CDs.

With an album on the horizon, what’s does the rest of the year hold for Flipturn? What’s your roadmap for 2021?

Besides working on the album, we have a few shows coming up right after this weekend. We are looking to go on a small 8-10 city tour at the end of April. Now that things are opening back up, continue to work on recording and writing. Put out something like a demo in the fall. Also around that time, look into doing another tour. We plan to release some singles leading up to the album. But of course, it depends on the aftermath of the summer season with the pandemic.

Lastly, what is one thing you hope newcomers can take away from your music?

I think just something that we’ve always loved about our songs is people can interpret them in any form that resonates with them. So it’s not necessarily what the lyrics are about in our eyes. It’s more about, you know, how people vibe with the music. Overall, at the end of the day, if one person finds beauty and emotion in the songs then I think we’ll be happy. Music is how you interpret it.

Check out Flipturn’s newest EP, “Something You Needed” here.