Next Up: Emerging Brooklyn and Dipset Cosigned Rapper Young Melo

Brooklyn native Young Melo is surely an artist to watch as he has worked with some of the most classic and influential hip-hop/ rap artists from Jim Jones, Cam’ron, and DJ Self.

TUC had the pleasure of speaking with him on collaborations and music writing rituals.

Breanna: When did you first realize that music was your passion?

Young Melo:  Basically when I was like 12 years old.

Breanna: Is anybody in your family musical as well?

Young Melo: My brothers used to make music. So every time I was in the house they would start playing all the old records and I was just enjoying it.

Breanna: Do you have a ritual that helps you get in a creative mood?

Young Melo:  Sometimes different things inspire me. Sometimes I will need to go out to a club, or something. Or maybe I just need to get away from everybody, just go to a whole other state. 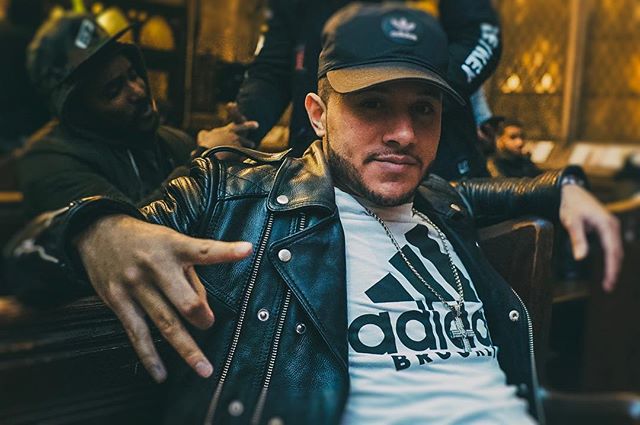 Breanna:  Is there any advice about the music business or life in general from your earlier days that still resonate with you until this very day? And if so, do you mind sharing that with our audience?

Young Melo:  Basically just trust your process and be honest with the music. If you don’t got money, or money behind your situation then it’s pretty hard for you to get in the door, to get noticed. I feel like you need an investor.  Without that, you can have all the music but it’ll only be so far you can go. Everybody does music nowadays. You can go on Youtube or Sound Cloud and see for yourself. Music is everywhere now so if you don’t have an investor to put you in the right places and promote you in the right ways, then I don’t think you could be successful unless you’re lucky.

Breanna: You’ve worked with some important people in the industry from Camron, Jim Jones, and Juelz Santana. How did that come about and what were the experiences like?

Young Melo: Basically they’re like family. Before I got in the music business, I was around them, cool with them. That just came about organically. I just started doing music like two years ago. So they were just helping me out with anything I needed. They were there for me so that’s how that came about.

Breanna: Your social media is filled with photos of some of the hottest acts in Hip Hop today such as Cardi B and DJ Self. What is your relationship with them in the hip-hop game, and can we expect some collabs?

Young Melo: Cardi I knew before I used to do music. She was a stripper. I always used to go to the strip club and show her love. That’s how I knew her and now she’s doing music now. She did music before me, so I never reached out to her to do a collab. Maybe in the future, you’ll see something.  DJ Self is another one. I know him from the club scene. I bump into him and you’ll see me working with him too in the future.

Breanna:  One of your most recent songs, “UFO” featuring DC Don Juan is a banger! What inspired that song?

Young Melo: That was another organic song. I came to the studio one day.  As a matter of fact,  I did that at Cam’s house. He got a studio in his house.They were playing music, they were playing a couple of beats and they were just going through beats and I came in the room and was like, “Wait, wait, wait, stop!Go back to that other beat right there.” And it was Sen City,  that was playing the beats. So when Sen played that beat I was like, “Wait, we need to do something to this.”Cam jumped on it because I think Cam had a date, so he had left. So that’s really how that record came about. He added a hook to it, Sin added a hook to it and I just added my verse.

Shout out to @worldstar for posting up my new single “They Love Me” featuring @thejuelzsantana & @sencity730 which is out now everywhere. I promise you the video is going to be crazy, everything I’m apart of is a Pay Per View event juuu heard 🎥🎥🎥🎥🎥🎥 #730Dips #MoreDipSet #NewBread

Breanna: You also previewed a song called “ They Loved Me”. What inspired the name, and what was the process in coming up with the song?

Young Melo: Basically, like I said, I just started doing music, so that was a record I felt as a new artist, having the people to co-sign me and having the people to support me, like all these names you have just mentioned, and these females as well, I just needed to come out strong.

Breanna:  What advice would you give to someone who wants to pursue a musical career?

Young Melo: Stay focus and keep working. Keep hitting the internet with content. Just keep making music.  If you don’t have an investor, you got to find somebody that’s going to believe in you and put up the money to support your career.

Breanna: What does True Urban Culture mean to you?

Young Melo: I looked up to a lot of hustlers and all the OG’s like Cam’Ron, Jay, and their story. That’s where I come from. No disrespect to nobody like Lil Yachty or whomever but I don’t come from where they come from. I respect what he’s doing right now, I respect everything that’s he’s got.He’s got a crazy foundation and I respect that. But I just feel like hip-hop is just all over the place right now.