As of today, the late Whitney Houston has earned her third diamond-certified album. Which means she has made history by becoming the first black artist to do so. On Oct 28th, The Recording Industry Association of America (RIAA) and Legacy Recordings reported that Houston’s sophomore album “Whitney”  has reached diamond status.

The legendary album consists of five Billboard TOP 10 singles. Some of those Billboard charting songs are “I Wanna Dance With Somebody (Who Loves Me),” “Didn’t We Almost Have It All,” “So Emotional” and “Where Do Broken Hearts Go”. Those singles all went No. 1 on the Billboard Top 100 Charting List. Houston also made a record of being the first female recording artist ever with four consecutive Hot 100 No. 1s.

The “Whitney” album being certified diamond is equivalent to selling over 10 million albums. The other two albums that are certified diamond is Houston’s self-titled 1985 debut album “Whitney Houston” and 1992’s “The Bodyguard” soundtrack. Her self titled debut “Whitney Houston”  has gone 13x Platinum. While “The Bodyguard” soundtrack has been certified 18x Platinum. 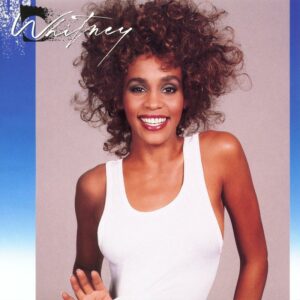 Not only is Houston a history-making black musical artist, but she will also be one out of the many being inducted into the Rock and Roll Hall of Fame during the 35th induction and celebration ceremony. The ceremony will be aired on HBO and HBO Max on November 7th at 8 p.m. ET. Houston will also be having an official biopic coming out pretty soon also. The Houston restate reported that they have teamed up with Clive Davis, Pat Houston, Larry Mestel of Primary Wave Music, Dennis O’Sullivan, and Jeff Kalligheri to produce the film.

With Houston claiming her third diamond album, this shows just how much people cherish her craft and music. Especially with the music era of streaming music, it seems that many people are still remembering Houston through her wonderful albums.