“How Many” Lives Does it Take: Miguel Releases New Heartfelt Song

With all the chaos, heartache, and damage that has taken place this week many artists and celebrities have decided to use their abilities and craft to help “heal” the world in a sense. Artists have taken to social media, participated in protests, and engaged in serious dialect on the social injustices that we have witnessed this week. They have used their celebrity and influence to bring awareness not only to the recent shootings and killings of this week but to the overall topics of racism, discrimination and intolerance. Celebrities/artists such as Chris Brown, Snoop Dogg, T.I, and more have shown their support and concerns for these issues and brought much attention to these issues.

However for some people, social media was not the only option they used in implementing this influence. Some artists decided to use their voice and artistic abilities to create relatable music that could help effectively voice the rage, sadness, and grief that we all have held in our hearts this week. An example of this would be Miguel. On Friday (Jul 8), the “Waves” singer went to Twitter to release a new song and let the world know what was going through his mind in the aftermath of the police shootings and killings of both Alton Sterling and Philando Castile and the police killings in Dallas. The demo is entitled “How Many” and just as the title, Miguel basically asks, “How many lives does it take for something to change? How many lives must we lose before revolution and change can occur?”

On his SoundCloud handle, Miguel writes, “This version was started (written/recorded) here in London in my hotel room between the hours of 4am and around 7am when I passed out,” Miguel wrote on SoundCloud. “I’ll update this song every week until it’s complete. Please feel free to share. #blacklivesmatter.” He also posted a video on Instagram where you can hear the track freely playing. In the caption he incorporates what he wrote on his SoundCloud page but adds that he will continue working on this track as it “evolves weekly.” 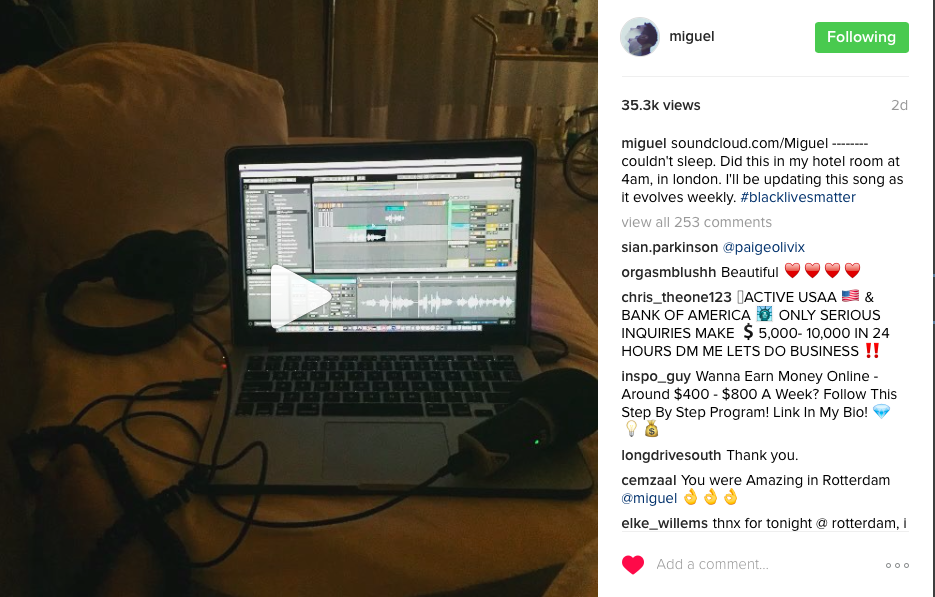 As the song begins you’re approached by the eerie vibes of the electric guitar as Miguel begins speaking lowly saying, “I cannot sleep, I cannot rest. I cannot dream…. I cannot stay silent” He directly reveals the song’s subject with lyrics such as “I’m tired of human lives turned into hash tags or prayer hands / I’m tired of watching these murderers get off.” He passionately begins singing, “Brothers and sisters it’s time to wake up/Brothers and sisters its time to say something, do something. How many black lives, how many black lives/how many heartbeats turned into flat lines?

I truly love everything about this song. I heard it only a few moments after Miguel posted it on Twitter and it gave me goose bumps. I played it non-stop, on the way to work and could not get it out of my head. It’s just so relevant to the issues that we have witnessed for so long.

Along with passionate, fiery lyrics, the production in this song truly helps push the art in the track. As the strings on the electric guitar begin and you hear the pain in Miguel’s voice as he speaks, you begin to revisit the initial pain you felt when you first heard about these police shootings. As the song progresses and you hear Miguel passionately chant: “How many black lives, how many black lives?” you just want to scream it in your headphones with him as he sings. Everything Miguel was saying I felt in my heart. I could hear the discomfort and grief in his voice as he asked “How many heartbeats, turned into flat lines?” I began to ask the same thing myself; I really wanted an answer. How many more people do we have to lose before change can occur? How many more innocent people must be taken from this Earth before we see action. I felt everything Miguel wanted us to feel in this song. I love when artists take the circumstances that we may face and create music from it because that is when we get the most authentic, beautiful songs.

Great job Miguel! This is most definitely going to steer us in the right direction towards that change you asked for in the song.