The Dr. Dre story is a tale of contrast, filled with both dizzying accomplishments and devastating setbacks that often occurred within mere moments of each other. Look no further than his historic, $3.2 billion deal with Apple: the career milestone almost vanished before his eyes after a drunken premature celebration with Tyrese hit the web. It’s the first moment in The Defiant Ones series, the four part HBO documentary narrating the lives of Dr. Dre and Jimmy Iovine.

As cinematic as their lives have been, it’s fitting that the duo would tab a director with a long, accomplished career in the movie industry to tell their story. Allen Hughes fits that bill, gaining his notoriety directing major motion pictures such as The Book of Eli, Dead Presidents, and Menace II Society. His work on The Defiant Ones is thus unsurprisingly detailed; thoughtful audio effects and shot selections add depth to the story in a way that many documentaries fail to utilize. While detailing the tensions Iovine felt while working in the studio with Bruce Springsteen, the conversationalist atmosphere is brilliantly set up with well-timed cutaways to the various characters. There’s far too many other moments of precision to mention, all of which hold the viewer’s attention through the lengthy documentary while keeping the storyline at the forefront.

To the benefit of that storyline, Dr. Dre and Iovine give the cameras unprecedented access into their lives, both past and present. High profile figures such as Gwen Stefani, Kendrick Lamar, and Snoop Dogg all contribute their voices as well, adding to the magnitude of the documentary. It’s been a long time in the making; studio sessions from the creation of Dr. Dre’s 2015 album Compton are used early and often, and audio clips from the album get the full video treatment in The Defiant Ones.

One of the heaviest moments of the film is Dre’s recounting of his assault on Dee Barnes in 1991. Upset that her producers had inserted Ice Cube’s rebuttal into her interview with N.W.A., he picked her up by her hair and brutally started beating her. Framed in dark shadow decades later, a bright spotlight illuminates his face as he profusely apologizes for his mistake, calling it a “major blemish” on him as a man.

“Any man who puts his hands on a female is fucked up,” he said in the interview. “He’s out of his fucking mind, and I was out of my fucking mind at the time.”

So what can music fans learn from their lives? There’s plenty of knowledge throughout the documentary, found in both direct quotes and the stories behind Dr. Dre and Iovine’s greatest accomplishments. “People become successful, and they get locked into the behaviors that led them be a success,” Bruce Springsteen quips when speaking on Iovine. “Jimmy was very good at letting go.” That innovative spirit propelled Iovine to new heights throughout his career, especially useful in his founding years at Interscope. He had made his name off his work with artists like Springsteen, U2, and Patti Smith, but redefined himself and his company by signing unexpected, left field acts that became huge successes. Iovine didn’t make business decisions based on his history, but based on himself, setting Interscope apart as a trendsetter in the industry from the moment they made “Rico Suave” by Ecuadorian rapper Gerardo their first release.

Dre had that innovative spirit as well, seen in moments like his decision to produce female rap group JJ Fad on the advice of Eazy-E. Their 1988 single “Supersonic” was a smash hit, and the resulting album sales ended up funding several future projects for Ruthless Records. With Dre, however, his ability to know when to walk away from a bad situation was equally important to his success. Once he realized his contract with N.W.A. manager Jerry Heller was a raw deal, ditching the group to start Death Row Records with Suge Knight and The D.O.C. solidified his place in the industry as N.W.A. crumbled behind him. But as soon as Suge brought unnecessary violence back into the equation five years later, Dre bailed again and started up Aftermath. Always knowing the right business decision, he had the confidence to step out on his own and forge his own trail, and success followed him.

It’s ironic that the two have their name on an academy at the University of Southern California after neither of them graduated college. Instead of a degree, it was their relentless drive that got them what they wanted in life. As Interscope was catching on in the early 1990s, Iovine knew he needed more superstar-level talent to keep up with the top record labels. In Episode 3, we hear the story of how he settled on Nine Inch Nails as that talent, and how he pried them away from their struggling label TVT. According to his wife, Iovine essentially lived out of the house bathroom for the next year, calling the necessary parties every morning at 6 AM until he finally had a deal. Nine Inch Nails became a household name, and cemented Interscope’s place in alternative rock in the process.

Once Death Row and Interscope brought Dr. Dre and Iovine together, there was no limit to what their powers could accomplish. Iovine’s label was the only one who believed in Dr. Dre’s debut album, as many others were scared off by the drama caused by N.W.A. Fortunately for both men, The Chronic drew widespread acclaim, and would become one of the defining albums of West Coast Hip-Hop. Their partnership yielded much more fruit as the years went on, eventually branching out into the technology sector and creating the iconic Beats headphone brand. Both of them had the vision and the skills to dominate the industry on their own, but instead their mutual trust allowed them to accomplish even more.

There’s 264 minutes of material in The Defiant Ones, and you’d be well served to watch it all. Not just for the knowledge that’s inside; it’s wildly entertaining, with plenty of comedic moments to keep the mood light. Not all of our most accomplished members of society give this kind of access into their journey, but it’s certainly a blessing when they do. 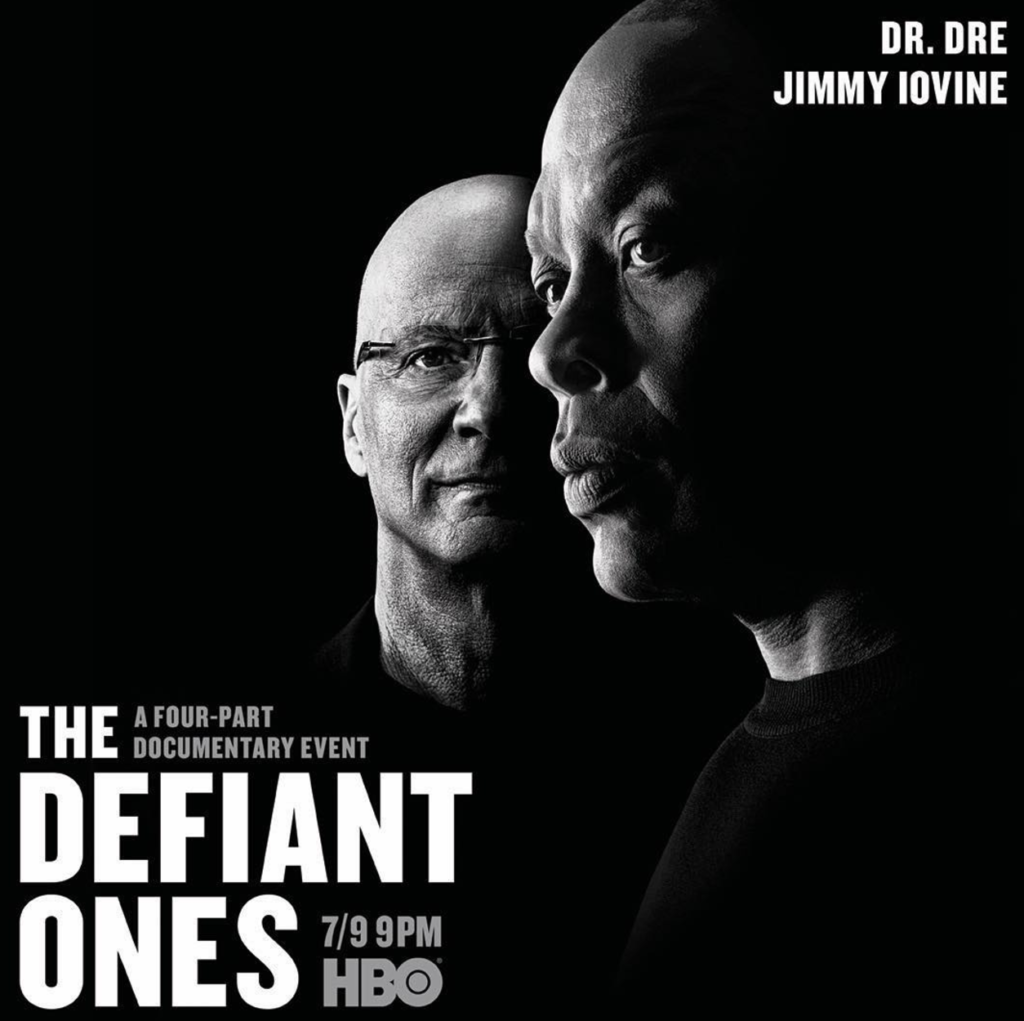