Stand up and rejoice Marvel fans!

During last weekend’s San Diego Comic-Con 2019, Marvel Studios president Kevin Feige took to the stage in Hall H to reveal a ton of new projects and plans in the works for the highly anticipated Phase Four of the Marvel Cinematic Universe, as well as a few series announcements that will be available on Disney’s new streaming service, Disney Plus. This news comes just a few short weeks after the release of Spider-Man: Far from Home, which acts as the final film of Phase Three.

After the release of Avengers: Endgame earlier this Spring, many were left wondering where the franchise was heading. With the series’ major antagonist Thanos finally being taken care of, and no information on which villain(s) would be taking his place or which heroes would be joining the MCU, rumors quickly began to spread on possible comic storylines that could be made into big-screen productions. Some even speculated, with Disney’s recent acquisition of 21st Century Fox, that characters from the X-Men and Fantastic Four franchises would be joining the rest of the Marvel family soon. Now, we have a concrete idea of what to expect from Marvel Studios starting as early as next year.

Standing alongside several celebrity guest stars, Feige announced a line up of movies and tv shows that will tie into the overarching MCU. This includes:

Shang-Chi and the Legend of the Ten Rings – Staring Simu as Shang-Chi, Tony Leung, and Awkwafina. Expected to release on February 12th, 2021.

Doctor Strange and the Multiverse of Madness – Starring Benedict Cumberbatch and Elizabeth Olsen reprising their roles as Doctor Strange and Scarlett Witch respectively. This movie will also tie into the upcoming WandaVision series for Disney Plus, and is expected to be the MCU’s first horror movie. Expected to release May 7th, 2021. 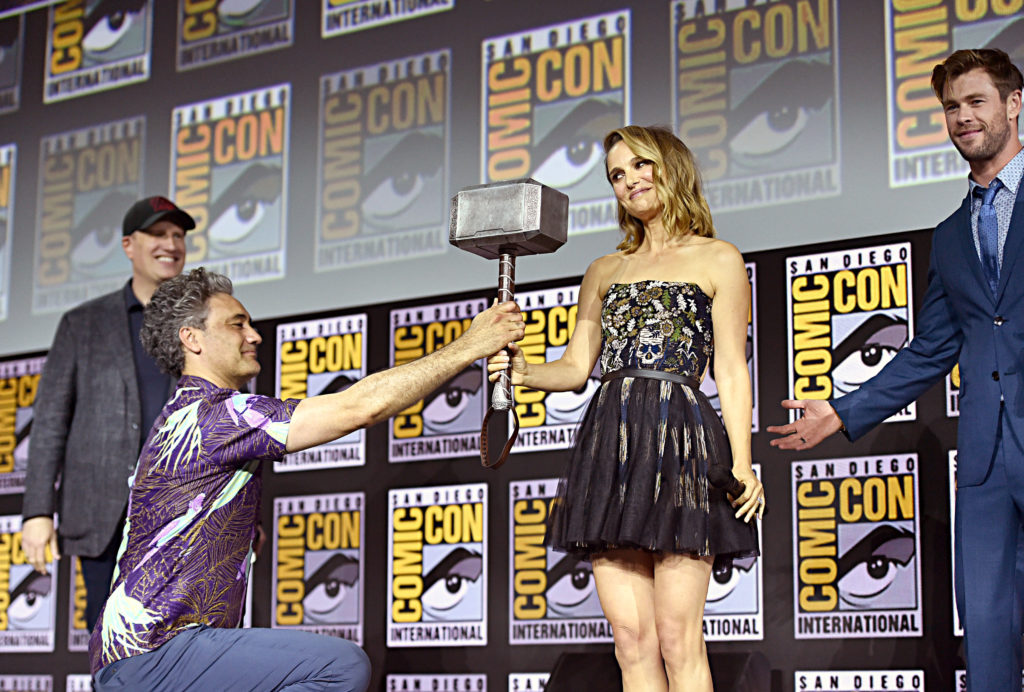 Thor: Love and Thunder – Starring Chris Hemsworth and Tessa Thompson, as well as the return of Natalie Portman as Jane Foster. Director Taika Waititi confirmed that Portman’s character will be taking the mantle as Thor in this film and it is expected to release November 5th, 2021.

There were a few other movies announced to be in the works, such as a Blade reboot featuring Mahershala Ali (who requested the role himself), as well a few sequels like Black Panther 2, Guardians of the Galaxy 3, and Captain Marvel 2. However, there wasn’t much information given regarding their release dates or storylines. Feige did confirm that the X-Men and Fantastic Four will eventually be joining the rest of the MCU, though this was also scarcely covered during the panel.

As for the Disney Plus releases, Feige reported that he will be personally overseeing the production of these series and that they will have bigger budgets than what is normally seen on television. Shows announced for the streaming service, so far, include: The Falcon and the Winter Soldier, Loki, WandaVision, Hawkeye, and What If…?, an animated series exploring alternate storylines. Each show is stated to feature appearances or star their original actors in keeping with the MCU continuity.

All we can say is that Phase Four is shaping up to be one of the most ambitious franchise moves yet, and we’re all here for it!

Previous ArticleTraveling 101: How to travel on a Budget
Next ArticleThe Second Opinion: What I Took Away From The Lion King (2019)
NIPSEY HUSSLE TUC RECAP