A Tailor Illuminates Refugees Hearts by Making them Clothes in Sudan

As war rages in the Tigray region of Ethiopia, many civilians escape the area with only the clothes on their backs and nothing else. But the good news is that a talented tailor named Omar Ibrahim is working in the refugees’ camp Oum Raquba in Sudan to provide any assistance he can.

What is happening in Sudan?

Some 49,000 Ethiopians have fled from Tigray to Sudan since the government of Prime Minister Abiy Ahmed launched a deadly attack against the Tigray People’s Liberation Front (TPLF) on November 4. They now have to live in some camps near the Sudan border and are depending on humanitarian help, having no food, and the only clothes they have is the one they have on their back. “There were so many bombings and so many dead that we couldn’t bury them,” says the tailor Omar Ibrahim, who is also worried about his parents who stayed in this bombarded region Humera.

Who is Omar Ibrahim? 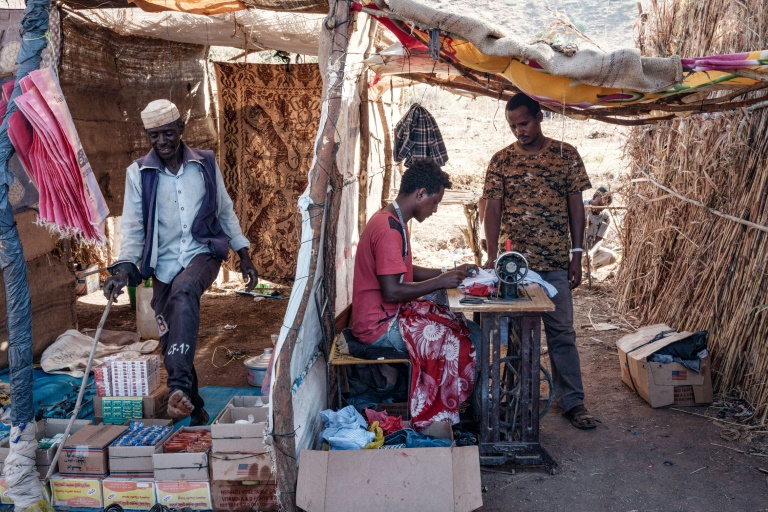 Omar Ibrahim is a 25-year-old Ethiopian refugee who arrived at the Oum Raquba camp a month ago from Humera, a town in Tigray. In Humera, he owned a store equipped with three sewing machines and specialized in women’s clothing, but because of the bombing, he lost everything. He now owns a little makeshift store and got an antediluvian pedal sewing machine which he rents to a villager. He claimed that he “had nothing and nothing to do” and that “sitting idle wasn’t going to improve my situation, so I decided to do the only thing I know how to do: sewing.” Working there helps him to gain his life and to fight his sorrows and claim to be happy to be still alive.

What does he do to help the community? 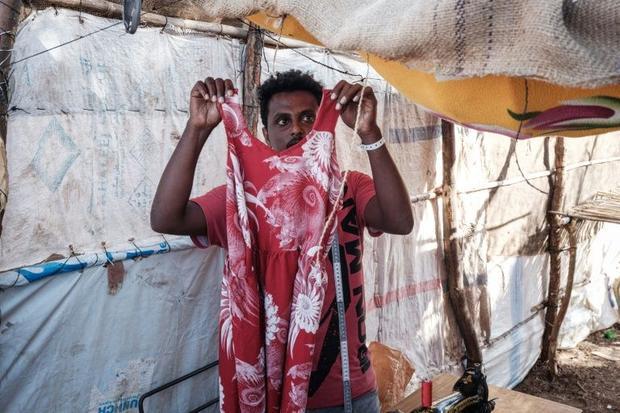 He enlivens the hearts of the refugees by making new clothes for them or mending theirs. He concluded an agreement with the Sudanese man for the Um Raquba’s village in which in exchange for the rusty sewing machine, he gave half of his profits to the owner. To help the refugees, he sews, repairs, and creates new clothes for them to feel more comfortable. “When I give people new clothes, they feel happy because they came here with nothing.” He also pointed out that “if people can pay me, I bill them. But if they don’t have money, I help them for free,” he said. “We all belong to one nation, we must help each other.” Near his store’s door where an old grey fabric acts as a curtain-like many refugee shelters, the walls and ceilings are made of straw and wood – a three-kid-mother who came to repair her son’s blue jeans says that it’s the only one his child has. “We have no other clothes than the ones we wear”.

This mother, like so many others, fled the region of Tigray to save the life of their children. Salomon, a 29-yo man covered with dust tells that “He helps people,” and adds that “He makes our clothes as good as new” – without him, many would have nothing to wear. We can conclude that Omar Ibrahim is truly an extraordinary man and without him, we wouldn’t know how the refugees would have dressed. Despite the war he lived, he has the power to warm people’s hearts with his fabulous talent.