Proceeds From The Notorious B.I.G’s Rap Snacks Arranged For An Urban Community

Rap Snacks have shed light on many rappers who have made an impact on Hip Hop and it was only a matter of time that it went back to the roots and legends.

On Dec. 6, 2019, the Rap Snack company announced their newest snack flavor with “Big Poppa Cookout BBQ Sauce” and “Notorious Honey Jalapeno,” in honor of the Notorious B.I.G. Fast forward to March 2020, the snacks have finally hit stores for fans and customers to grab a bag. 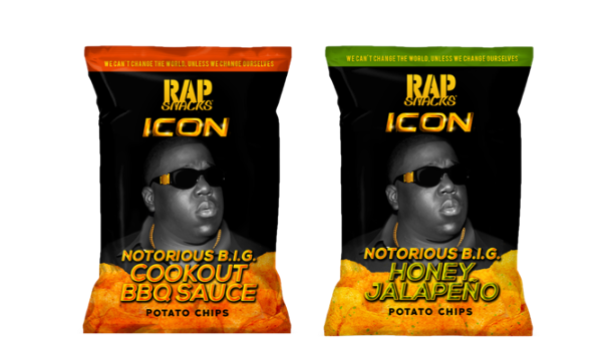 Not only are the chips paying respect to one of the greatest legends to do it, but it’s also helping give back to the community. A partnership between The Christopher Wallace Memorial Foundation and the Rap Snacks ‘Boss Up’ Foundation has been established and the proceeds will be covering the necessary technology and education tools for the youth. It’ll also give back to the elderly in the same Urban community.

“I’m happy to announce our partnership with Rap Snacks and the Rap Snacks Boss Up Foundation to create delicious flavored potato chips packaged with my son’s, Notorious BIG moniker and image,” Voletta Wallace, Biggie’s mother, expressed on the Rap Snack website. “Our primary focus in doing this deal was to assure a portion of proceeds of sales are paid to The Christopher Wallace Memorial Foundation to further our efforts of providing computers, books and other educational tools to inner city youth as well as assistance to the elderly in the Urban communities.”

Biggie Smalls will forever be a respected rapper to many people and the Rap Snacks shows that his legacy will live on.