High-end and luxury fashion are not just clothes. Those clothes tell stories, and when you wear a piece, you feel as though you’re a part of the story. But what if you weren’t the image for that story? What if that story wasn’t meant for you to be a part of? “ I wish those people didn’t buy my clothes- they were made for upper-class whites”- Tommy Hilfiger. We, as black Americans, were stripped of our culture, and we had to make our own from the ground up. Even in fashion, we made our stuff and made everyone want it. Look at Dapper Dan and Gucci; he was an innovator and made Gucci a name in the black community since 1982. Gucci didn’t notice him until 2017.  Something had to change, and someone had to tell our story in High-end fashion. Someone had to be unapologetically black and, at the same time, be luxurious. One designer from Flatbush set out to just do that. Kerby Jean Raymond, the founder, and creative director, made that a reality in 2013 when he started Pyer Moss.

Kerby Jean Raymond grew up in Flatbush, New York. He got his first internship at 14 with Kay Unger New York. While interning there, he got into a great conversation with her, and at 15, she hired him as an assistant designer at Kay Unger. That was Kerby’s foot in the door to the world of fas 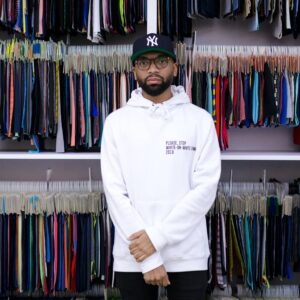 hion, and he hasn’t looked back since. Around 2013, Kerby would create the Pyer Moss fashion label. Just like any new luxury label, Pyer Moss had to find its footing in the industry. What got more eyes on Pyer Moss were the collections and runway shows. In 2015, Kerby showed a police brutality video at one of his runway shows for NYFW. Imagine having everyone in the fashion industry at your performance, and you submerge them into this world that is relatable for some. That show made some white people in the industry feel uneasy. “ I’m speaking to anyone besides us” “ I’m not making work for white consumption.” Kerby knew what he was doing. He was amplifying blackness and making it luxury.

He was creating a world that is new to some, but feels like home to people that look like him. In 2017, Kerby inked a deal with Reebok, a 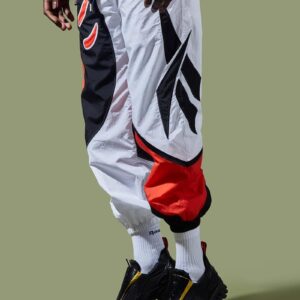 nd he used that money to buy back Pyer Moss to have full creative control. “We were underfunded (Pyer Moss), and I couldn’t create the designs that I wanted to. So when I got the deal with Reebok, I used that money to buy Pyer Moss so I can have creative control- Vice”. From great runway shows to inking a deal with Reebok, that is when Pyer Moss started to not just get consumer recognition, but industry recognition.

So, with the company in his hands and creative control plus a Reebok deal, the sky was the limit. The three collections after were all cohesive. The concept for these collections was to highlight the imprint that African Americans had on American culture. He wanted to bring those stories to the forefront and showcase them. “ This collection concept came from a conversation with my team and my boys and how black men feel as though we aren’t American-Highsnobriety.” Collection 1 focused on the Compton cowboys and how the original cowboys were not John Waynes but were black men.

Collection 2 touched on the black family and also paid homa 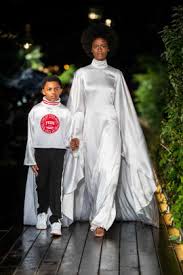 ge to FUBU during the show as well.  Collection 3 was also to pay tribute to the contributions African Americans have made to American culture. It highlighted Sister Rosetta Tharpe, a queer black woman who started the sound of Rock and Roll music. 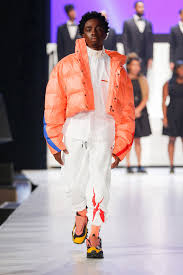 Kerby made a story and a message with these collections. And by doing that, he has opened the floodgates for black designers to start telling our stories instead of relying on Gucci, Louis Vuitton, Alexander Wang, etc., to try and tell them. With the boldness and New York realism that is Pyer Moss, Kerby Jean Raymond made something that screams I’m black and I’m proud with the subtleness of being high end and a luxury garment that is in Neiman Marcus and Barneys. It’s our turn to tell our own stories and tell everyone what we are worth and it started with Pyer Moss.

Previous ArticleWhy Do We Hate Lizzo so Much?
Next ArticleMore Game Of Thrones Spin-Offs Possibly In The Works
NIPSEY HUSSLE TUC RECAP