The Most Bizarre Fashion Runway Venues of All-Time

Sometimes, designers think a little bit too out of the box to manage to do a traditional catwalk and go beyond the possible. Over the course of history, designers have found extraordinary places to display their garments that would simply take your breath away. These shows were just simply A M A Z I N G.

The Great Wall Of China By Fendi  Spring/Summer 2008 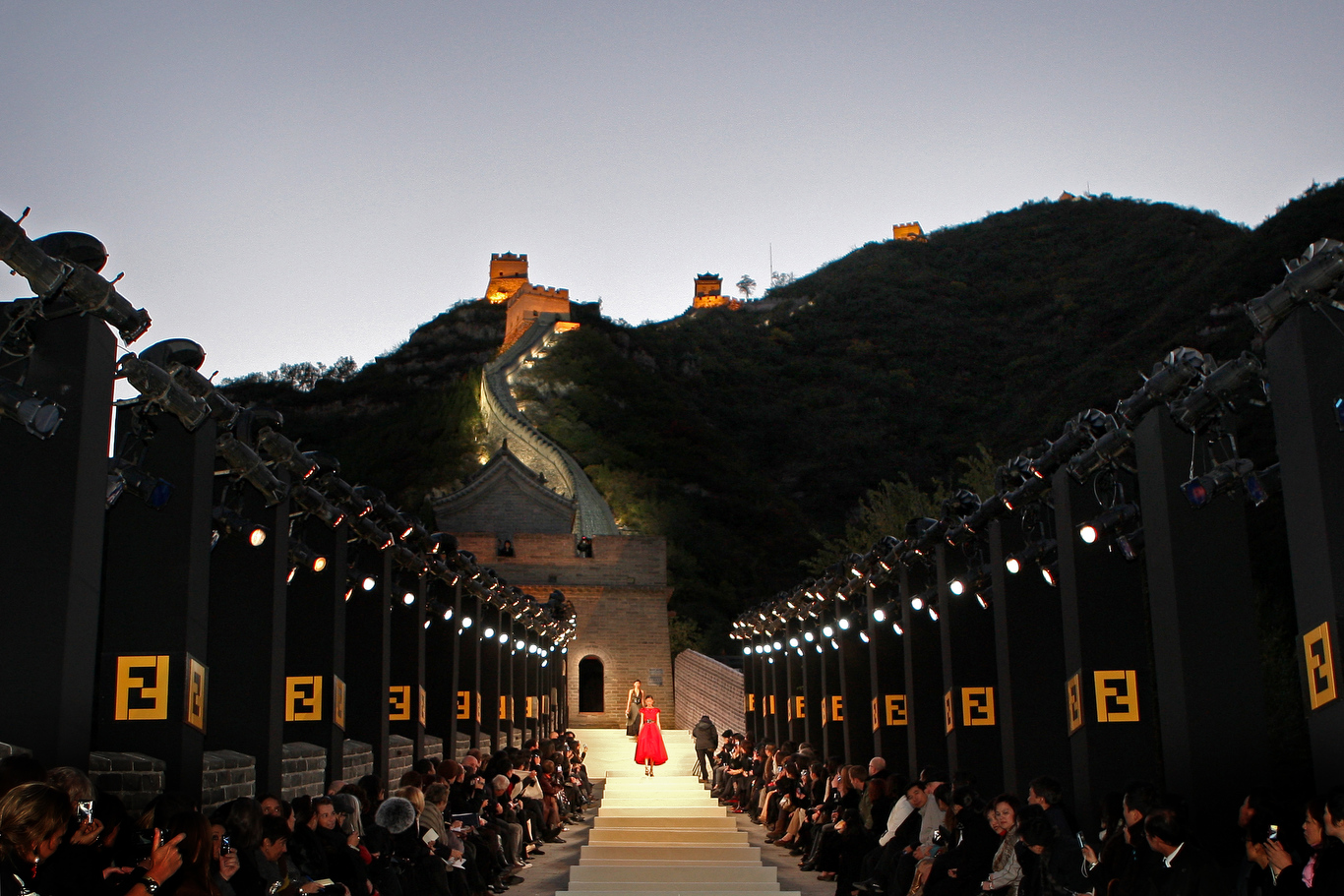 Let’s depict the great wall au China Fashion show by Fendi in 2008. Karl Lagerfeld – one of fashion’s greatest masterminds – had staged the most spectacular, most memorable, and most expensive – that cost on average 10 million dollars – fashion show the world has ever seen. This monumental presentation took place on the ancient 1,500 miles long Great Wall of China where 88 models ran down the elevated runway in dangerously high platform heels. 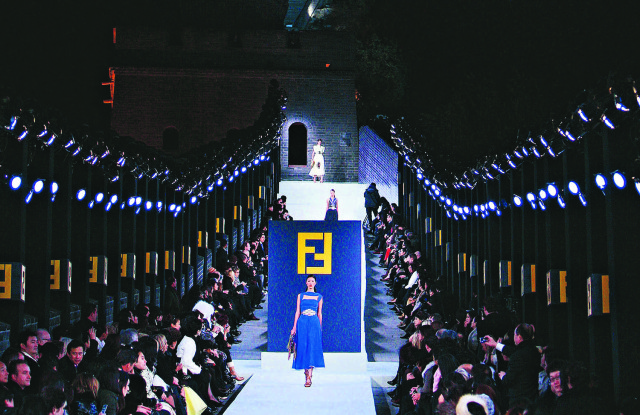 This was one of the most unexpected catwalks ever! You’ll be surprisingly astonished by seeing models walking on the floor and then, suddenly, falling into deep clear water. 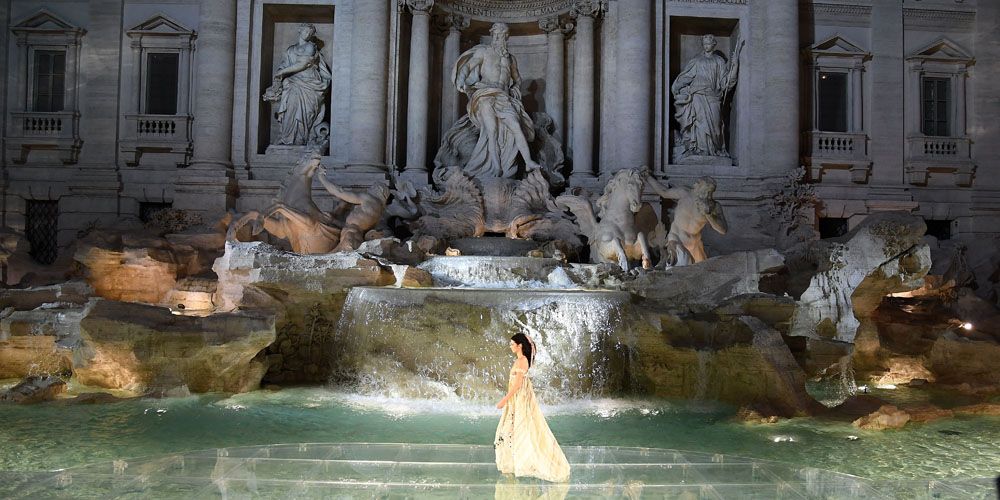 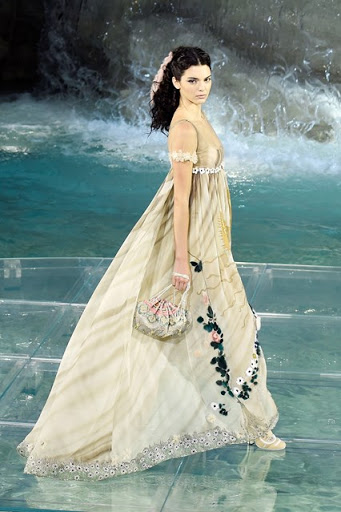 Have you ever seen a catwalk where models walk on water? Karl Lagerfeld had made it possible by making a fashion show on the Trevi Fountain in Roma, celebrating the house 90’s anniversary. The models – with Kendall Jenner who opened the show – were walking on a glass runway, as the sun was setting on one of Rome’s most historic landmarks. It also should be noted that In 2013, Fendi made a 2.4 million dollars investment to restore the Trevi Fountain – showing that they didn’t forget from where they came (Rome is its home city). “Legends and Fairy Tales” was the name given to this catwalk, highlighting beautiful creatures who populated an enchanted forest – what a magical story! The pieces were made of lace, feathers, organza, and intricate embroideries and fur by experienced artisans who worked for hours and hours. “When you actually see the extraordinary couture pieces, you’re reminded of the 90-year legacy of the artisanship of Fendi, and there is something magical about that”, stamped after the show Justine Picardie, editor in chief of Harper’s Bazaar magazine “It doesn’t happen enough in fashion, but when it does, it makes me feel inspired and positive about the landscape.” 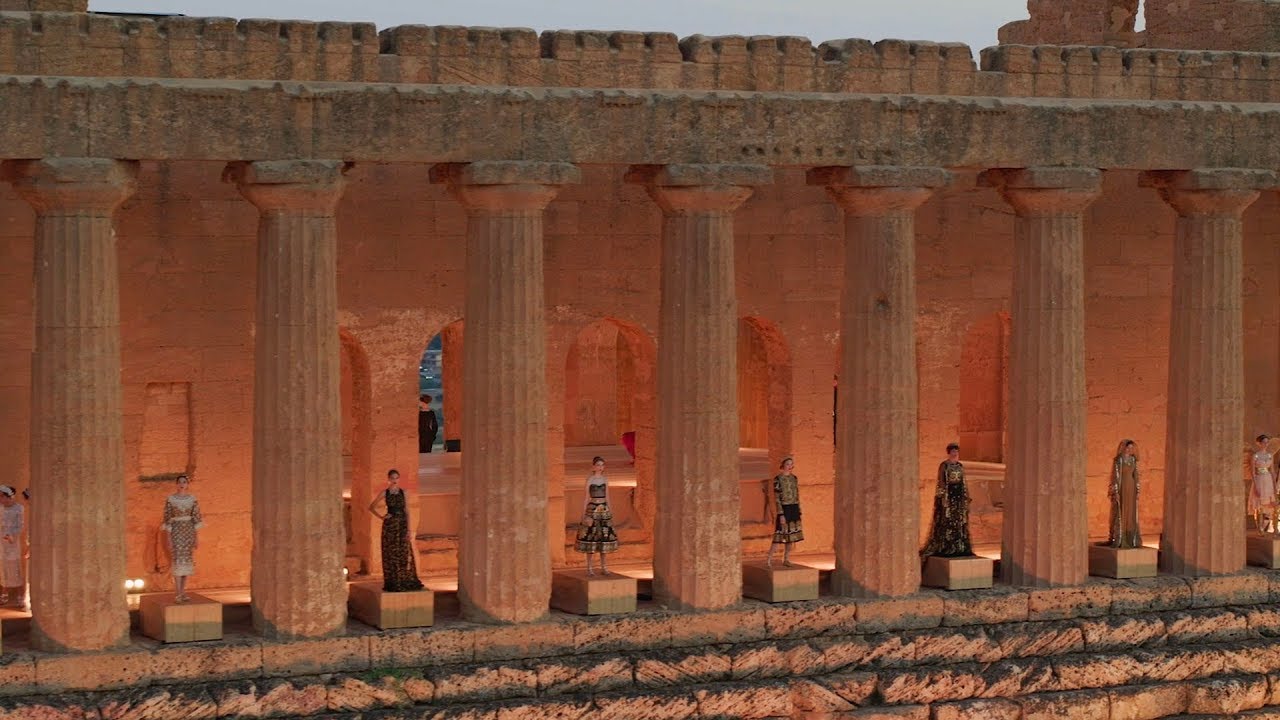 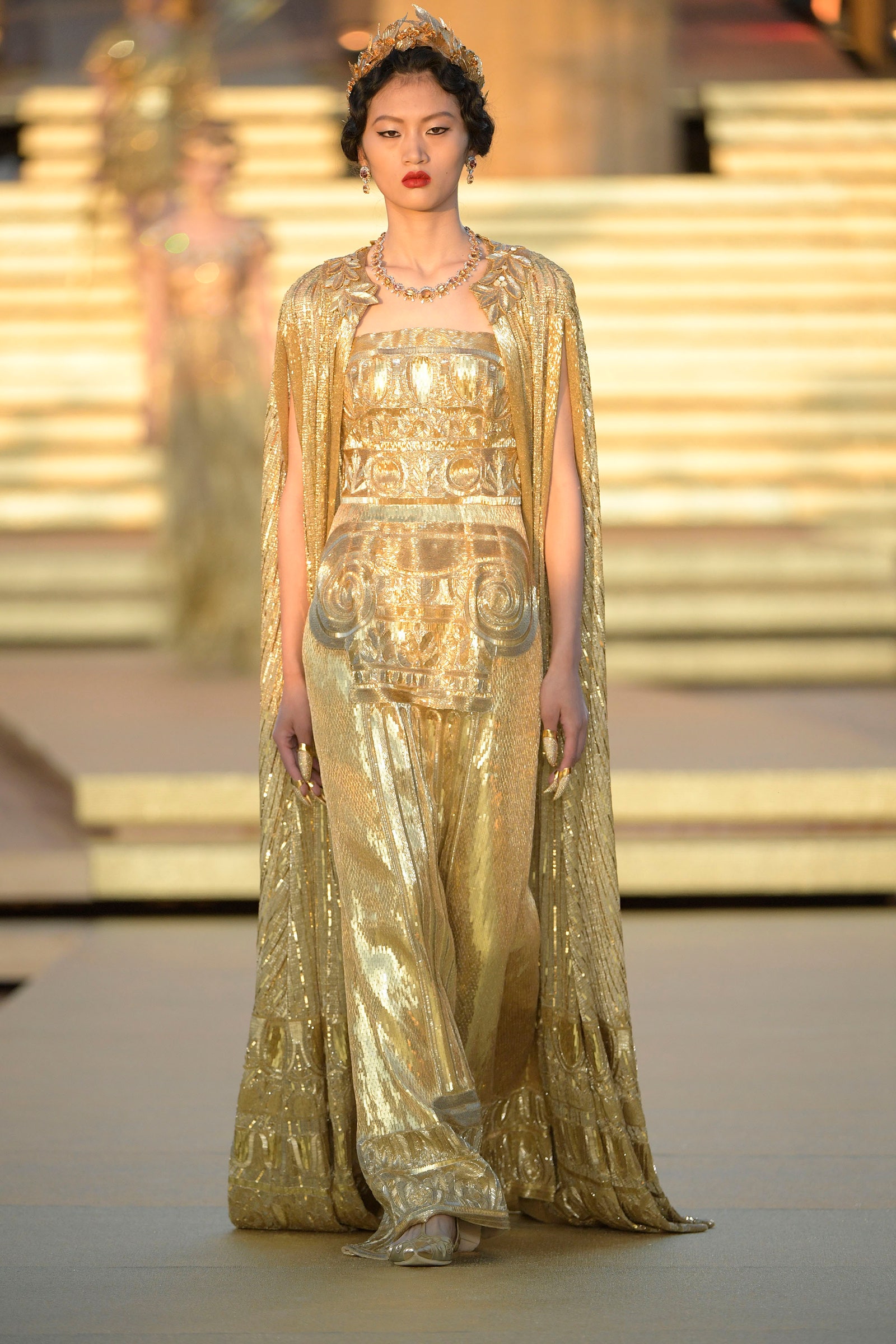 Staged in the Valley of the Temples, in the shadow of the Sicilian town of Agrigento, Dolce&Gabbana managed to do a more than a breathtaking catwalk that will increase your emotions tenfold. This complex – which is considered one of the most complete with Parthenon – was built some five centuries before Christ. This setting is an ensemble of preserved temples located on a mesa with a wide view of the Mediterranean sea. With Sicily as its native country – the collection was first launched in Taormina in 2012 – Dolce&Gabbana wanted to go back to its roots. Concerning the setting, it took two years to finish this masterpiece as they needed to make some restructuration to preserve this cultural patrimony’s jewel-like structure, so they put a wooden floor on a sandy layer to preserve the structure. This experience was really thrilling for Helena Christensen; “I thought of all the powerful women who had walked here thousands of years ago”. The collection’s inspiration came without doubt from the ancient Greek and Roman goddesses covered with beautiful golden masterpieces, like reproductions of Jacques-Louis David’s neoclassical paintings, printed on loose woven silk gazar, dresses shimmering with coral fronds – Sciacca, a town nearby, is famous for its coral jewelry, – a corsage was glittered like the capital of an Ionic Column and its Empire skirts were sewn to produce the illusion of the flutes of a column that shimmered in the wind when the model was walking… “It gives me the dream”, said Dolce after this spectacular show. 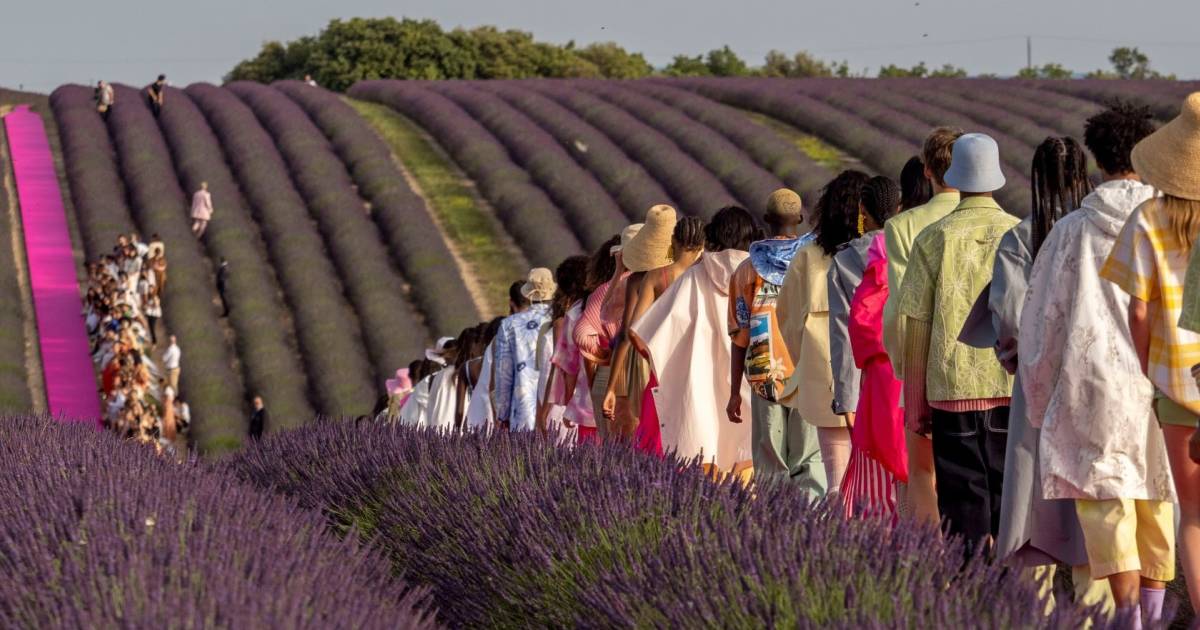 Jacquemus decided to celebrate its 10 years’ anniversary in the lavender fields of Provence, France. It is there, on his Provencal land, that Simon Porte-Jacquemus wanted to revisit the tradition and give a spectacular show called “Coup de soleil” – or “Sunstroke”- on a pink carpet more pop than ever. Dozens of mannequins paraded on the hills of Valensole, which are covered in purple when the lavender sprigs bloom from mid-June to the end of August. Jacquemus, who claims his love of Provence – he was born there – and his fondness for the ’80s knows how to mark the spirits: a fuchsia-pink parade carpet carved its furrow between the purple rows to sublimate his creations. The collection put in highlight pastel shades, “oversized” pinch jackets and pants, floral patterns, layering, and dresses structured in a tight and open-worked mesh.

Saint Laurent’s Spring 2021 collection was unveiled via a film shot by Nathalie Canguilhem in the middle of a desert, where models were walking across a sand dune embossed with the YSL logo. This collection – contrary to the Fall/Winter one – is all about Saint Laurent’s version of comfort and ease. He claimed that he “wanted to focus on the essence of things” and he “thinks it’s a sign of the times”. “But I didn’t want anything bleak or heavy. The desert, to me, symbolizes that yearn for serenity, open space, a slower rhythm. The clothes are also softer, the spirit of the collection is more gentle, stripped back.” The collection’s flagship pieces  – even if we can’t list them all here – is the bike shorts, matching with a sharply-tailored jacket or a slinky blouse and we mustn’t forget the lace and satin hot pants. The color code was obviously black and white, with some patterns here and there. To finish in beauty, at the end of the video, we can see a title card from Vaccarello reading, “I wish you were here.” 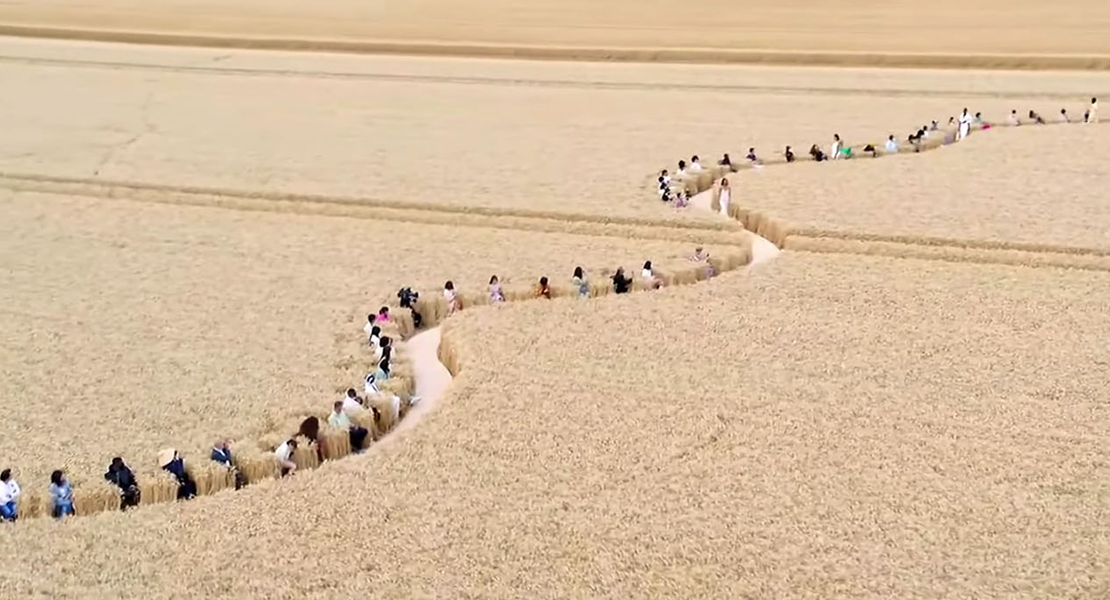 The spring-summer 2021 Jacquemus collection “L’amour” – “The Love” – drew a new landscape: a country spirit, all in modesty, which paraded through the wheat fields an hour from Paris. Simon Porte Jacquemus was the only one to organize a fashion show – as the Spring/Summer 2021 Fashion Week was being presented digitally, online. “It was important for us to parade because it’s at the heart of our brand, our strategy revolves around this moment”, confesses Jacqemus. “It’s a moment of magic, we couldn’t have done without it, we all needed it, the brand first.” The catwalk was in all simplicity and without outbidding,  and the collection was thought around the “celebration theme” with dresses and costumes for a wedding – whether you are the groom or not – a baptism, a party or simply to have fun.

To sum it all up, we can see that each of these designers have so many different styles and different visions of how a catwalk should be done and where it should take place, but they all inspire people with the magical emotions they are able to transmit.