The A3C Hip-Hop Festival Takes Over Atlanta On Oct 8th!

On Oct 8th, 2016 the A3C Hip-Hop Festival took over the streets of Atlanta. Thousands of hip-hop lovers gathered at the festival grounds to enjoy hip-hop culture, art, and food trucks. I had the wonderful pleasure of being in attendance on Oct 8th . On the day of the festival, it was nearly impossible to find a parking space. Cars were all lined up on the streets of Edgewood Avenue, alongside people’s homes, and parking lots were filled. I luckily found a free parking space in an apartment complex about five minutes from the festival grounds.

Walking into the festival with my A3C team t-shirt on and wristband as my pass, I was greeted by several other volunteers who were checking people in. After introducing myself and getting instructions from Mollie Beavers, the production manager of the event who also assigned the tasks for the volunteers I was instructed to go to the merchandise table. Walking into the festival there was a huge stage that read “Toyota Music DJ House” where DJ’s were playing music, people dancing, and there was even a station next to the stage where people could get a haircut. The section was titled the “Toyota Music DJ House Barbershop.

Toyota employees were at the festivities as well. There were computers in Toyota cars right next to the barbershop where attendees could fill out a form then create a custom A3C t-shirt on the computer. Many people lined up just to get a free custom made A3C t-shirt.

In the mix of people eating from the food trucks at the festival, smoking, dancing, and enjoying good music all of sudden Killer Mike strolls into the festival park. People began surrounding the legendary rapper wanting to hug, shake his hand, and even take a picture. He was generous to everyone who came up to him.

Meeting Killer Mike was amazing, and he was one of the most humble rappers I ever met. His assistant was in attendance making sure that everything ran smoothly when people surrounded Mike to take a picture. 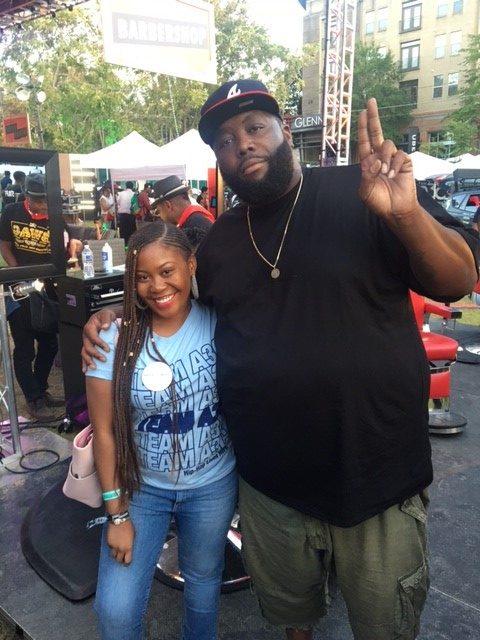 Several other volunteers and I continued to walk around watching people having a great time at A3C. ABLradio.com hosted something similar to a cypher right across from the merchandise table where people could rap a few bars. After all, it is a hip-hop festival. One artist who goes by the name Que signed to Mosart Records Inc. got on the mic and immediately attracted a large crowd.

From cyphers to the main stage, the sounds of Outkast music began to be heard in the air with “Throw your hands in the air.” I immediately ran to get a good spot at the main stage to catch the ATLiens tribute. The tribute was fantastic and lived up to my expectations to what an Outkast tribute should be like. All the acts had high energy, stage presence, and of course knew the lyrics of the ATL legends dope tracks. The ATLiens tribute included Michael Aristotle, Nick Grant, Ras Kass, J-Live, Nappy Roots, and much more.

Up next was Too Short representing the West Coast. Too Short performed singles from the beginning of his career to now. He had the ladies moving when the sounds of his music seeped into the ears of the audience.

After Too Short had performed, Twista played some of my favorite hip-hop classics from him such as “Do or Die” and “Celebrity Overnight.” Everyone latched on to every word of the songs and the crowd sung along to the hit records not even paying attention the winds and cold air.

The night ended with the performance of the legendary hip-hop group Bone Thugs-N-Harmony. The group founded in the 90s is the only hip-hop group ever to record with Eazy-E, Tupac Shakur, and Biggie Smalls. The lights dimmed, the group came out on one of their greatest classics “Mo Murda.” They then performed a medley of classics and tributes, from “East 1999”, “Thuggish Ruggish Bone,” and “1st of the Month.” Bone Thugs paid homage to the man that gave them their start, Eazy-E calling him the “The Godfather of Gangsta Rap.” They performed several of Eazy’s verses from the 80s and performed his verse from their hit single “For The Love of Money.” Then the group gave a tribute to the Notorious BIG by playing “Notorious Thugs,” “Cali,” “Juicy,” and “Hypnotize.” Up next was the Tupac tribute with “California Love,” “Thug Love,” and several other of Machiavelli’s hits.

Bone Thugs-N-Harmony left the crowd with one more classic record before exiting the stage, “Crossroads.” Dedicating the song to all of hip-hop’s fallen angels and the big three, Eazy-E, Biggie Smalls, and Tupac Shakur. A3C Hip-Hop Festival 2016 left fans feeling like it was the 90s all over again.

Previous ArticleWhen Does "Cuffing Season" actually begin?
Next ArticleA Seat At The Table vs. Lemonade--It Is Not A Competition
NIPSEY HUSSLE TUC RECAP