KIMYE VS. TAYLOR SWIFT, Who Won and Why ?

The Kanye West vs Taylor Swift drama all started in 2009 where Kanye “famously” interrupted the country singer’s acceptance speech in defense of his good friend, Beyonce’ for the ‘best video of all time” according to him.

On Kanye’s latest project, The Life of Pablo, the song Famous particularly the lyrics:

…landed the rapper in controversial waters yet again. Taylor Swift and her camp claimed the lyrics/song were not approved.

But now we have video evidence proving otherwise thanks to Mrs. Kim Kardashian-West. On Sunday’s episode of Keeping up with the Kardashians, Kim takes up for Kanye and says he had approval and Taylor knew the song was coming out. Later that night on her Snapchat Kim put up the video evidence of the call where they are discussing a lyric that Taylor acted like she knew nothing about:

See the photo below: 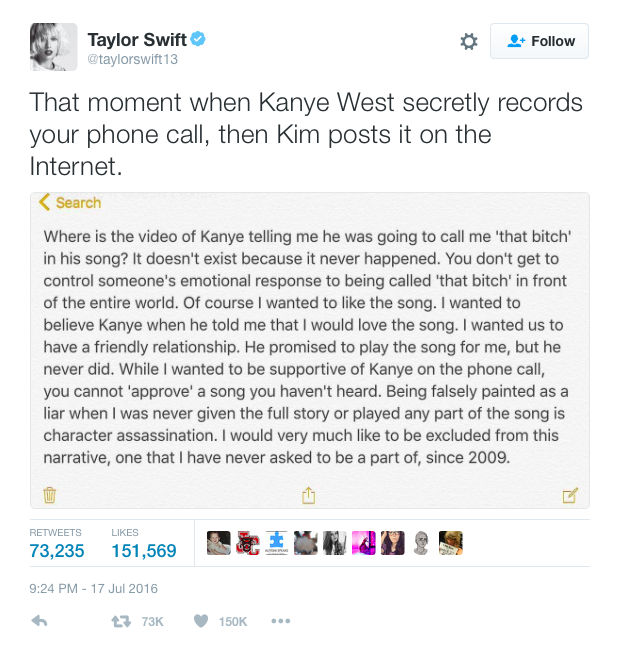 Now here is the conversation in full from the video, and the two were discussing a LYRIC, and the SONG, but she is clearly informed of the lyrics that address her.

Kanye West: For all my south side niggas that know me best / Feel like me and Taylor might still have sex.

KW: Oh, well this one is — I think this is a really cool thing to have.

TS: I know! I mean, it’s like a compliment kind of [laughs].

KW: What I give a fuck about is just you as a person, and as a friend.

KW: I want things that make you feel good. I don’t wanna do rap that makes people feel bad.

TS: Yeah. I mean, go with whatever line you think is better. It’s obviously very tongue in cheek either way. And I really appreciate you telling me about it, that’s really nice!

KW: Yeah. I just felt I had a responsibility to you as a friend. I mean, thanks for being so cool about it.

TS: Aw, thanks! Yeah, I really appreciate it. Like, the heads-up is so nice! … People do things without like even asking or seeing if I’d be OK with it. And I just really appreciate it. I never would’ve expected you to tell me about a line in your song. And then the flowers that you sent me, I Instagrammed a picture of them and it’s the most Instagram likes I’ve ever gotten. It was like 2.7 million…

KW: Relationships are more important than punchlines, you know.

TS: Yeah. I mean, I don’t think anybody would listen to that and be like, “Oh, that’s a real diss. Like, she must be crying about it…” You gotta tell the story the way that it happened to you and the way you experienced it. Like, you obviously didn’t know who I was before [the 2009 VMAs]. It doesn’t matter if I sold 7 million of that album before you did that, which is what happened. You didn’t know who I was before that … I can make these things happen and I have the ideas to do it and I create these things and concepts. And, like, I’m always gonna respect you. And I’m really glad you had the respect to call me and tell me as a friend, about the song. It’s just a really cool thing to do, and a really good show of friendship. So thank you.

KW: Thank you too.

TS: And you know, if people ask me about it, I think it would be great for me to be like, “Look, he called me and told me about the line before it came out.” Like, joke’s on you, guys, we’re fine. You guys wanna call this a feud, you wanna call this throwing shade. But right after the song comes out I’m gonna be on a Grammy red carpet and they’re gonna ask me about it and I’m gonna be like, “He called me.” … It’s awesome that you’re so outspoken and it’s gonna be like, “Yeah, she does, it made her famous.” It’s more provocative to say we might still have sex … It doesn’t matter to me. There’s not one that hurts my feelings and one that doesn’t.

Of course, she probably wasn’t happy about it, I mean who would be, it was an awkward situation, but clearly there was a heads up given.

I honestly think Kim knew Taylor would try to play the victim role so she made sure she had her evidence this time if the situation ever rose to the media’s attention. Well played Kimye.