And The Winner Is…

Unless you’ve been living under a rock for the past month you’ve surely heard about the big fight coming up in August between boxing great, Floyd Mayweather, and UFC’s newest badass Conor McGregor.

After about a year of hoping and anticipating fans got a shock this summer when it was announced that the fight would indeed happen.

Over the last week the boxers were on an “international press conference tour” to help promote the fight. The tour traveled to L.A., Toronto, Brooklyn, and ended in London. The press conference did not at all lack in excitement, which only made fans more anxious for the August 26th fight night. Nobody ever won a fight with their words but if they did here’s how it would have gone.

L.A.
During the opening press conference in L.A. Mayweather controlled the show; he graced the stage with an electrifying amount of energy which clearly conveyed the level of confidence he has in himself. The champ came out swinging and set the tone early to let McGregor know who has been dominant the longest. First stop goes to Mayweather. 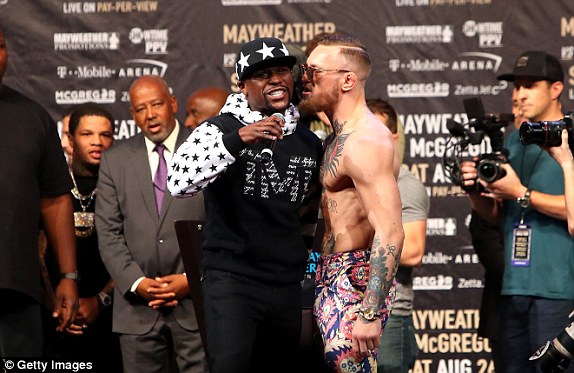 Toronto
The next stop was Toronto where the fans seemed to favor McGregor, which the UFC warrior used to help fuel his retaliation banter aimed at Floyd in response to the previous day’s press conference. McGregor was clearly looking the return some of the verbal shots he received the day before. One of the more noteworthy remarks from McGregor was “Why are you carrying a school bag, you can’t even read.” From a fans point of view he was victorious in his efforts. With his newfound verbal confidence and the support of the crowd is was clear decision; second stop goes to McGregor.

Brooklyn
When the tour made it to Brooklyn fans seemed to sway a little more in Mayweather’s favor but that did not stop McGregor who came prepared with an arsenal of insults not just for Floyd but also for his money team and his lifestyle; referring to Mayweather’s success as being built on a fake empire and then giving Floyd a copy of Jay-Z’s 4:44 album saying he could learn from it. McGregor seemed to be merciless in his efforts to irritate Floyd but the champ seemed to be un-phased. Mayweather responded with insults and antics that made it hard to believe McGregor’s words are even reaching his ears; including showering McGregor with money. All who watch can feel the tension and McGregor seems to be strong in his confidence but Mayweather wins Brooklyn. 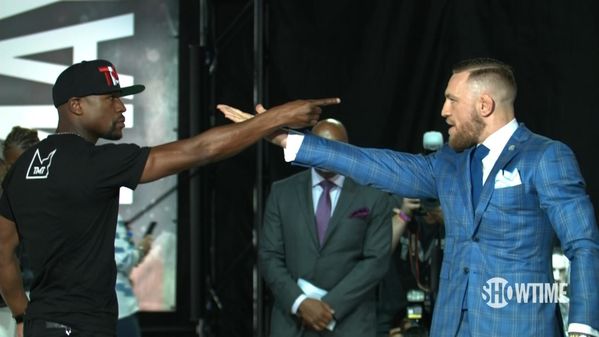 London
The final stop was in London and the crowd was heavily supporting McGregor here was their attempt to drown out Mayweather’s words with strong “boos.” This however did not stop Mayweather from taking verbal jabs at McGregor, in fact it was as though Mayweather was feeding off of the negative energy he was receiving from the London crowd. McGregor went as far as to rub Floyd’s head to toy with him, and Floyd ripped down the banners with McGregor’s name on them.

Maybe it was the fact that this was the last press conference, maybe the two had finally had enough of each other but there was something extra between the two in London. Floyd almost seemed to take is personal despite his “It’s not personal, it’s just business motto.” That being said Mayweather is the champ for a reason and he seemed to thrive off the negative energy the fans were giving him to once again show how confident he is that he will win in August. London goes to Mayweather as well.

Both fighters have said more than a mouthful but what else would you expect from these two? In the end one of them has to lose, and come August 26th someone is going to be served a slice of humble pie. The stakes are set mighty high and much more than a paycheck is on the line. A perfect record, and chance to rule in two fighting divisions, and of course bragging right are all at stake; and with that said may the best man win.