Behind the Art : Interview with King Saladeen 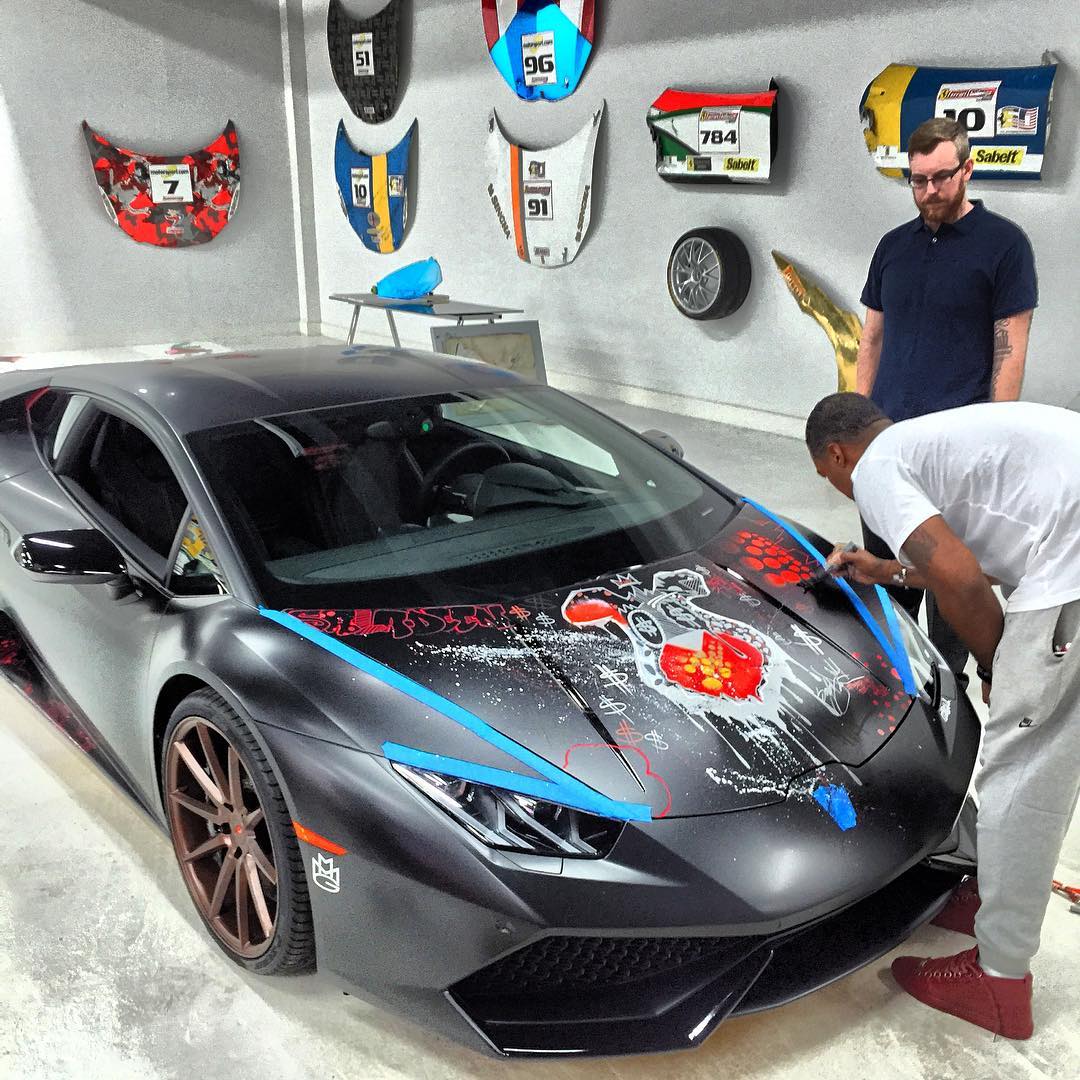 King Saladeen is an urban artist from West Philadelphia. Unlike most artists who learn how to create art, King Saladeen was a natural talent. Starting at a young age, he drew on his walls and ever since then, the world became his canvas. You may have seen his popular bear logo, however what’s interesting is the story behind the bear and the journey King Saladeen had gone through to reach where he is today.

Massiel : How old were you when you started to create art, and when did you fall in love with art?

Saladeen : I was just working on my documentary and I actually just asked my mom the same question recently. She says around 5 or 6 years old. I just remember writing on my walls and shit like that. My room was crazy; I tried to make it look like walls in a subway station.

Massiel : When you decided to leave basketball for an art career, did you have any people discourage you about that decision?

Saladeen : Yeah definitely, because basketball is very common. Even if it were something like rapping, as long as it was something people could see the outcome for, then they would have been more supportive. I was leaving college to do something that I only saw the vision for. I wanted to do something creative, maybe fashion, but I definetly saw the vision in it. I was creating sneakers and jackets and continued creating. 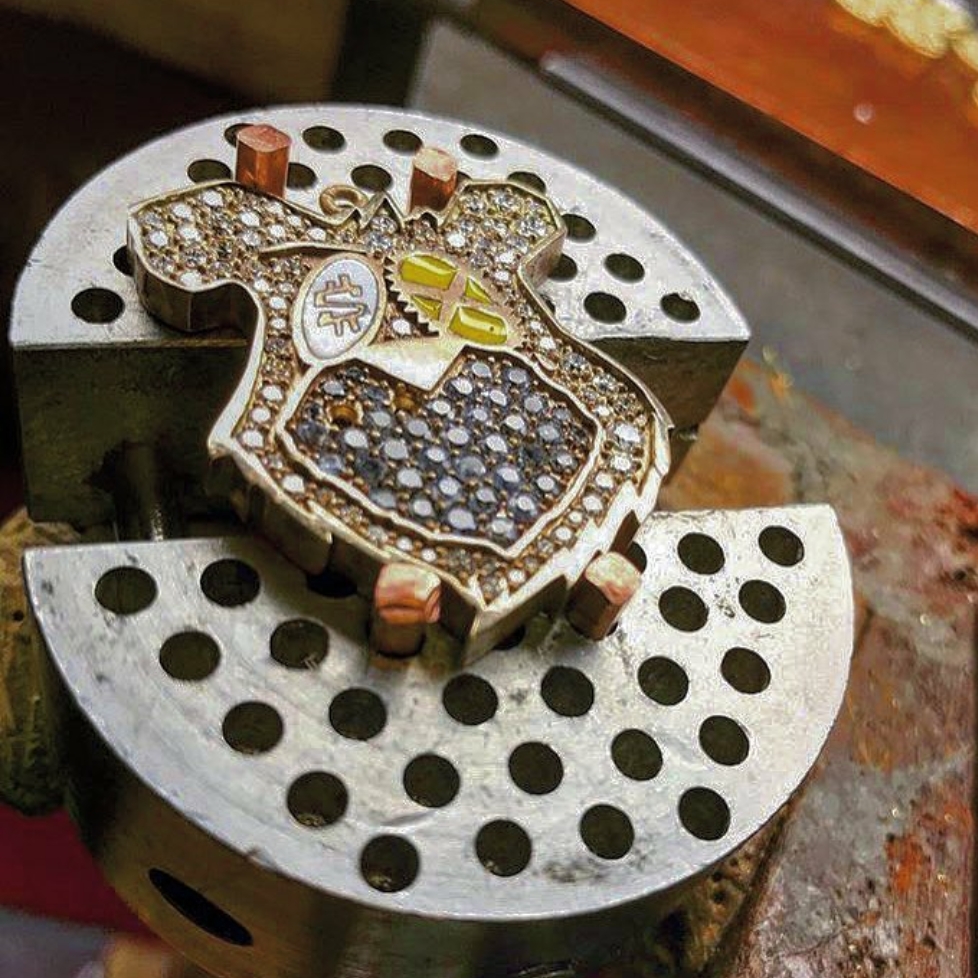 Massiel : What kept you motivated, despite some of the negativity?

Saladeen :  It wasn’t really anything that kept me motivated. Some people sung, some people danced but art was what I did to make myself feel good. It was just in me. I never thought about making money at it. People would ask me all the time if I went to art school, and I would say ‘nah’ and they’d be surprised, because it’d be some really dope art.

Massiel : Every artist has his or her staple piece of art. For example, when people see the crown, they know it is a Basquiat piece. For you, it’s the bear. What’s the meaning behind the bear?

Saladeen : The bear actually has a very sad meaning. It was one of the first pieces that my best friend, who passed away back in 2013, actually liked. He always gave me his honest opinion. I would create abstract art and he would say ‘this is dope, but it doesn’t represent you and it isn’t something that will be remembered.’ So, I knew I had to come up with a logo, something to be remembered by. We grow up and see our favorite clothing brands, and cars and they all have nice logos. I knew to be relevant I had to come up with a logo. I wanted to be able to represent myself without having to put my name on it. I didn’t really choose the bear; it was something that I just ended up creating again and again. Then all of a sudden everyone wanted me to make them a bear and it kind of stuck. 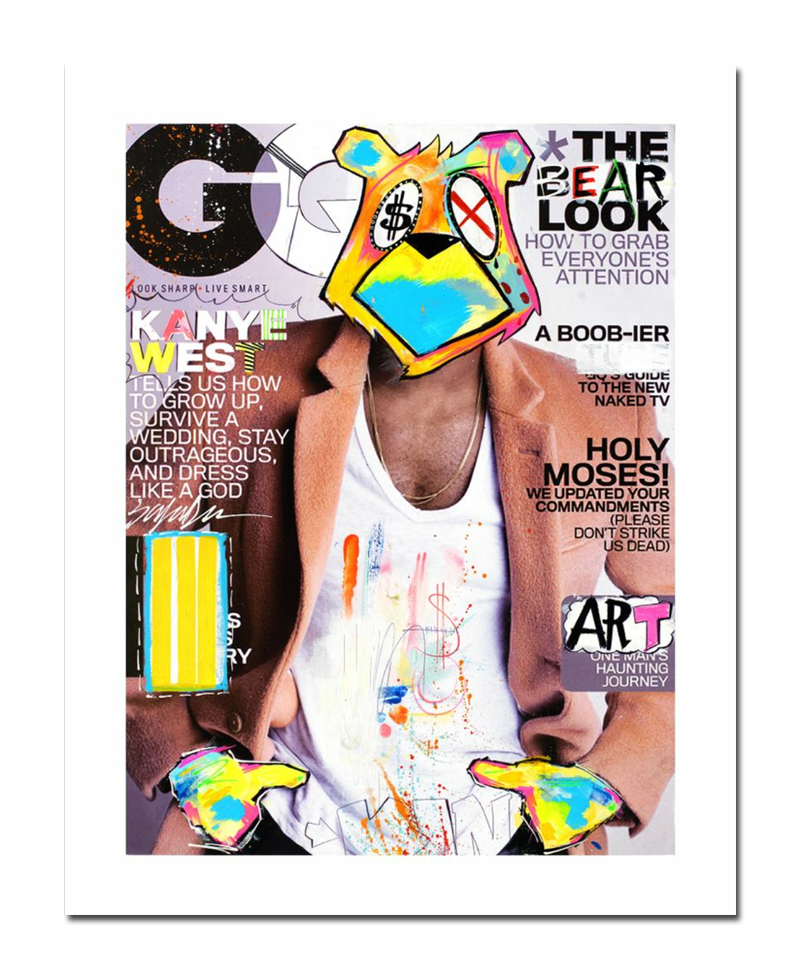 Massiel : I noticed on your Instagram that people are getting your art tattooed on them, does it mean a lot to you?

Saladeen :  Of course, it’s crazy. Just the fact that I am young and black and doing what I love is one thing. When other people start receiving and loving it, that’s a whole other thing. When I first started seeing people getting the tattoos, it was probably about two years ago. The first person I saw get a bear tattoo really caught me by surprise. All I could think was ‘What the fuck?’ I remember creating that bear, and I’m going through the thought process of what would it take and how much must you love something to get it tattooed on you? For example I love Jordan’s, but I would never get them tatted on me. It’s super deep because it’s beyond art, it must be an emotion to make someone want to get something like that tattooed. I don’t even have the bear on me.

Massiel : Are there any artists that you look up to?

Saladeen : I like a lot of the greats that aren’t here anymore. Just based on the fact that they were creating in a certain time period that isn’t here any more. I really respect that and that’s what I’m trying to do. I’m trying to be a part of that, where I’m creating in in my generation. A lot of artists that I see, I love their work but I don’t feel anything when I see their work. I don’t see a lot of people who are speaking through their art. I stopped focusing on what was dope and just continued to create my vision. 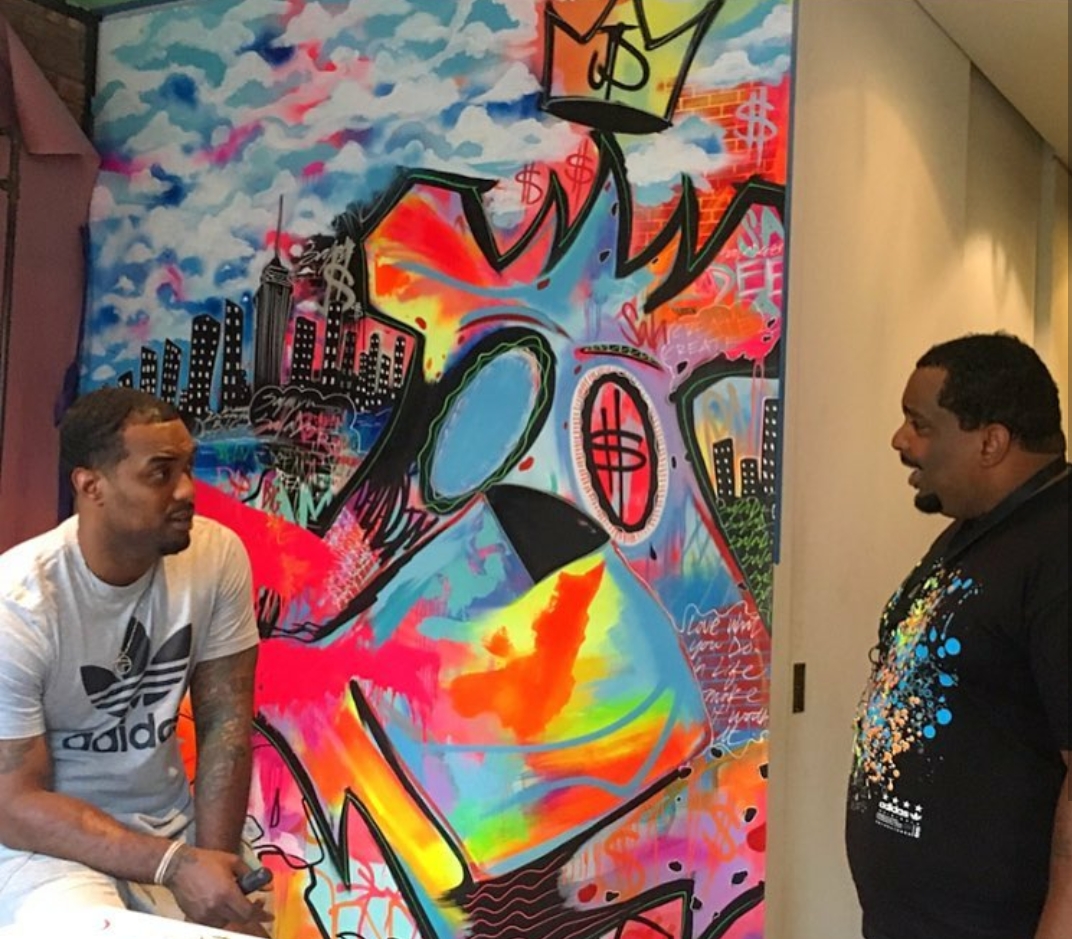 Massiel: If there was anyone out there that wants to pursue their dreams, what would you say to them?

Saladeen :  First thing, don’t listen to what people say. 9 times out of 10 people don’t want to see you succeed. If you want to reach your dreams, remove people who don’t have a vision or talk about getting to the next level. Surround yourself with  people who grind and who will always motivate you. Second thing is, you have to live it. That’s what my best friend who passed away told me, “If you want to do this art thing, then live it. You can’t do your art and not tell anyone about it. You need to put your art out there. I’m from the hood, so I didn’t know anyone who enjoyed art. So he would tell me “You may have to go downtown and hang out with the hippies. You have to get in that world.” Also study and respect your craft and surround yourself with people who share those interests. Lastly, I am very close to God and I pray a lot. I think you should pray on those goals a lot. And they should definitely write down those goals and repeat them, otherwise it just becomes an idea.

It should never be about the money. If you do art, it should be about you being the best artist. I like to wow myself. It keeps me motivated. All I ever wanted was to be influential. I grew up around dudes that aren’t here anymore. Now I’m doing stuff with big names and that’s influence. Everything I do to express my brand, I do it to represent that. 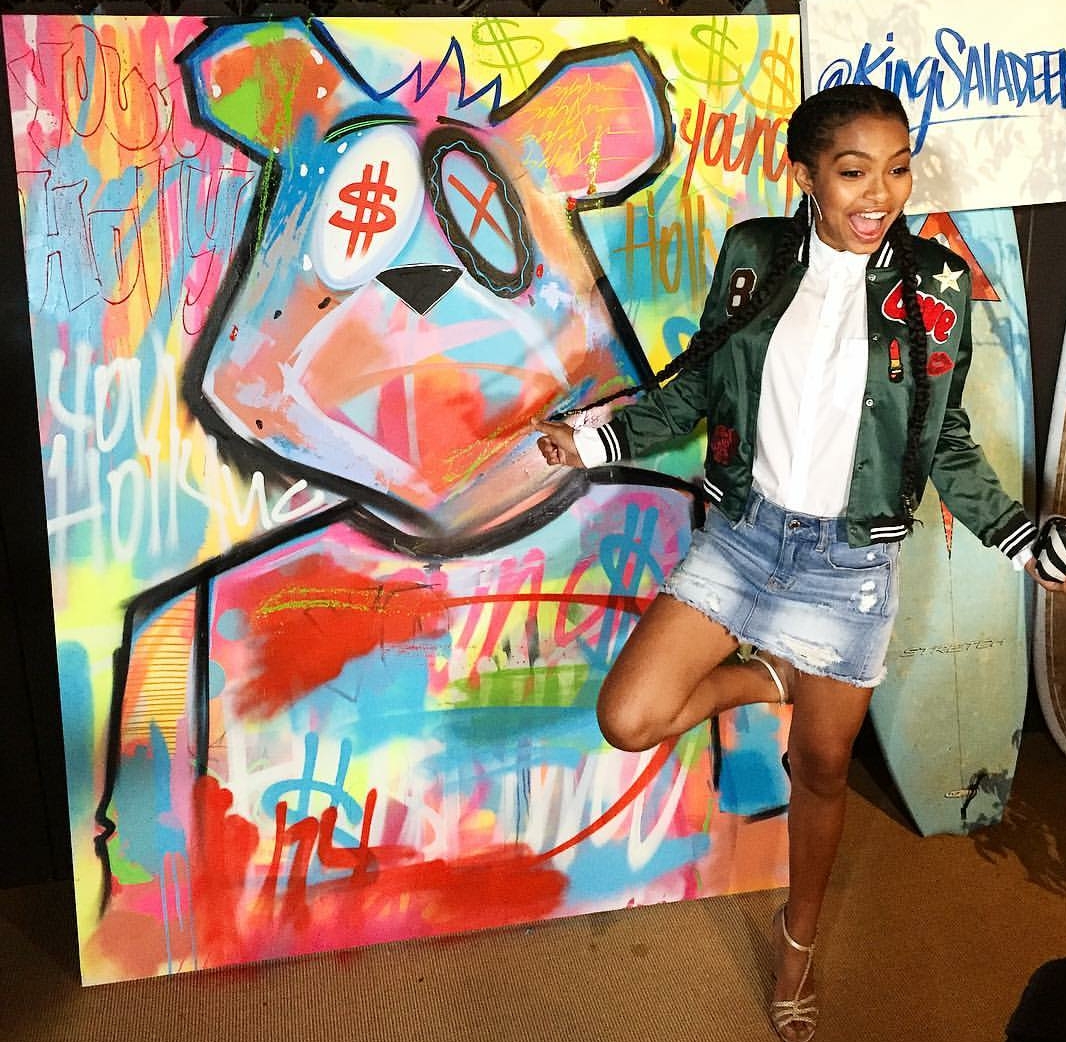 Massiel : What does True Urban Culture mean for you?

Saladeen : The culture of having nothing and making it into something and doing it in a very creative and dope way and doing it with no outside boundaries. It’s amazing things happening, kind of like serendipity in the hood.

Make sure to check out King Saladeen’s art and to follow him on his social media platforms! 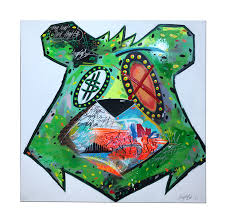