TUC 5: Reasons Why You Should Rally Behind Lavar Ball

He’s a “bigot, a misogynist, an attention whore, and an overprotective father”. Those are some of the words that critics use to describe Lavar Ball. Lavar Ball rose to fame when his eldest son, Lonzo Ball, committed to UCLA to play basketball after graduating from Chino Hills high school in California. Since then, the man behind the Big Baller Brand, has caused an uproar in the sports community with his outlandish remarks such as he could beat Michael Jordan 1 on 1 and that his son, Lonzo, is already better than Steph Curry. For the record, I am not an advocate for Lonzo Ball nor do I support everything that comes out of his mouth, but I think it’s very important that we all take a step back and assess the impact that Lavar Ball is having on the culture.

5. Lavar is challenging the status quo.

In basketball you are not suppose to say anything deemed disrespectful or dare mention your name in the same sentence as Charles Barkley or Michael Jordan when your accolades don’t back it up. If you do make disparaging remarks, you should submit to the pressure of the public backlash that you receive from the media. Lavar Ball not only called out current NBA stars and legends, he also didn’t back down when the media confronted him about his public remarks. How can you not respect that ?

4. He discloses barbershop conversations about athletes.

Charles Barkley having 0 rings is one of the biggest punch lines around the NBA. It’s so much of a punchline that his own TNT co-worker, Shaquille O’Neal uses it as a get out of jail free card to win every argument with Barkley. It’s one thing for Shaq to say it but for a man whose biggest claim to fame so far is being the dad of a talented NBA prospect, you probably shouldn’t try to ruffle any feathers. To some this is shows pure ignorance but for me this is a man that is clearly unapologetic and will not humble himself because his resume says that his opinion doesn’t matter.

3. His sons back him up his provado with their play.

In sports, the loudest athletes are usually the best in their sport. Deion Sanders, Floyd Mayweather Jr., Connor McGregor, and Muhammad Ali, all dominated in their era. Granted Lavar Ball wasn’t an exceptional athlete but he is the father of not one, not two, but THREE future stars in Basketball. Lonzo Ball led the UCLA Bruins this past college basketball season to the NCAA Sweet 16 and is projected to be the number 2 pick of the 2017 NBA draft. This was all done a year after UCLA won just 15 games and missed the tournament the previous year. LiAngelo Ball is next up to carry the ball (pun intended) at UCLA next season, and youngest son LaMelo Ball scored 92 points in a high school game for Chino Hills. As a man, wouldn’t you be braggadocious if your kids accomplished all of these feats ?

2. He is building a brand right before our very eyes. 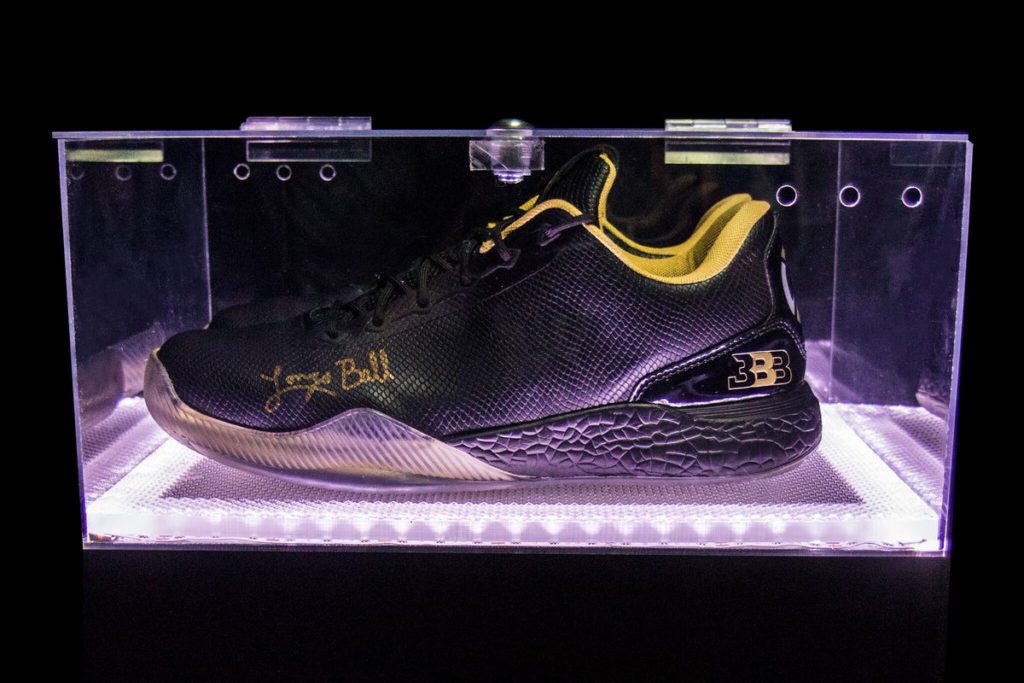 As a kid growing up in the early 90s, I didn’t get to witness the rise of sports apparel juggernauts, NIKE and Adidas. When Under Armour was founded in 1996, I was just a six year old in the first grade just trying to figure out what happy meal toy I wanted with my McDonalds. Lavar currently has Big Baller Brand T-shirts and hats, but now he is branching off into shoes. In an interview with ESPN Radio LA this past February, Lavar said ”

“We already got our own brand. Triple B’s. Lonzo is going to be the first one drafted with his own brand. That don’t happen.”

The key word here is brand. When LeBron arrived in the NBA in 2003, he immediately had his own signature shoe with NIKE. Lavar is simply stating that Lavar will be the first athlete to enter the league wearing a brand that he and his family owns outright which is so dope ! Lavar has also garnered support from a whos who of celebs in music and sports.

Just bought my son @hvrlemtaylor & a few of his friends the "Lonzo @zo Ball's" #Z02 kicks just on the pure fact that I've spent over a million dollars, shit probably more on Nike's, Jordan's & other big name sneaker brands in my lifetime so why not support a family brand & a rising stars shoe….. Funny how niggas will go & buy Gucci flip flops for $300-400 with no complaints but then complain & bitch when a kid & his family is making a name for themselves & trying to grow their own brand….. I also think about all these $500 duplicate Jordans niggas out here going broke & dying over just trying to keep up with Jones's…. While MJ, as much as I love & support him & his legacy ain't really ever did much for the black community other then tax our mothafuckin' ass for the same shoes over & over as well as charge these kids parents hella money to get in these camps. & again, no hate… MJ is MJ but today I chose to support @Zo & his family…. fuck how anybody feel about it… keep making memes if that's all yo broke hatin ass can do….. maybe sometimes, people need to delete the meme app off they phone & start creating their own legacy instead of picking apart someone else's….. I will also be buying 10 more pair of @Zo's kicks for 10 kids who's parents can't afford them….. on behalf of myself & @therobinhoodproject #DatWay #TheRobinHoodProject #BigBallerBrand #itAintTrickinIfYouGotIt

@Lavarbigballer I will buy 2 pair I respect what u doing

1 He’s a father that is trying to make sure his boys are successful.

There is this stigma in the black community that the black man doesn’t take care of his kids and abandons his responsibilities in the household. It’s amazing that the media highlights the moms of athletes (as they should), but the father of an athlete is “overbearing and needs to back off and let his children be adults”. Lavar Ball isn’t the only father of an amazing athlete to fall victim of this type of criticism. Earl Woods, father of golfer Tiger Woods and Richard Williams, father of tennis players Serena and Venus Williams, all dealt with this criticism in their day. However, Tiger Woods turned out to be one of the greatest golfers of all time with his father by his side and Serena and Venus Williams are two of the most accomplished tennis players of all time with their dad serving as their coach. This brings me to my question of why do we always point to the lack of the black father in the black household but in the same vein we criticize the black father who is front and center for his children ? We tell the parents “thank you for creating a new star for us to cover , make bucket loads of money off of and criticize when we are offended by what said athlete says and does as you {the father} sit back and watch from the sidelines”. Here is Lavar Ball telling us that he instilled in his children the confidence and work ethic to be great, he won’t apologize for his belief in his kids no matter if it sounds crazy or offends you,  he will help his kids create a brand that his children will own and see every dollar out of, and that he would manage his kids because no one knows them better than he does and he would not allow them to be taken advantage of by outside influences.

How can you not rally behind a guy like that ?