Has Body Positivity Become Too Commercialized?

Whilst celebrating becoming the ‘first big black woman’ to be on the cover of Vogue, 32-year-old singer Lizzo spoke out about the way in which she believes body positivity has become too ‘commercial’, which doesn’t always have its benefits. She suggests that the efforts many have made to normalize different body types have been mimicked, however only because of its current ‘trend’ status. Lizzo also believes that it has been appropriated to a certain degree.

When speaking about this topic, she told the Vogue interviewer that “It’s commercialized. Now, you look at the hashtag ‘body-positive,’ and you see smaller-framed girls, curvier girls. Lotta white girls. And I feel no way about that because inclusivity is what my message is always about. I’m glad that this conversation is being included in the mainstream narrative. What I don’t like is how the people that this term was created for are not benefiting from it. Girls with back fat, girls with bellies that hang, girls with thighs that aren’t separated, that overlap. Girls with stretch marks. You know, girls who are in the 18-plus club. They need to be benefiting from… the mainstream effect of body positivity now. But with everything that goes mainstream, it gets changed. It gets—you know, it gets made acceptable.”

The Truth Hurts singer is known for being an advocate of self-love and self-worth, but it seems as if she wants t 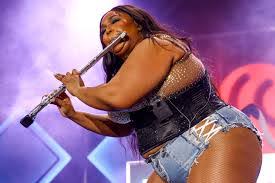 o take this one step further. She went on to state that it would be lazy for her to just be body positive, and that in order to make a significant change she needs to do what she can to normalize body types, as ‘being fat is normal’, but her attempts are often met with responses within the nature of ‘ooh, look at this cool movement’.

All in all, it looks as if we still have a long way to go in order to achieve Lizzo’s goal of body normalization, but in the words of the Grammy Award Winner herself, ‘Change is always uncomfortable, right?’