The term “Black Pain” movies are movies, where Black men and women are in leading roles where the main obstacle of the story is overcoming oppression and the main villain always being racism.

A Black TikToker and his friend uploaded a video discussing how they were tired of seeing all of these Black Pain movies. Where in any time period a Black person is subject to racism and prejudice. For example Precious (2009), The Help (2011), Django: Unchained (2012), 12 Years A Slave (2013), Fruitvale Station (2013), and most recently Two Distant Strangers (2021). The Black community never sees their people play roles that have no connotation to racism, but instead everyday problems.

All anything “White Hollywood” seems to know and enjoy putting out is the trauma and pain Black people go through on a daily basis. This leaves Hollywood profiting on this pain and trauma because all that society seems to believe is Black people only deal with racism and never deal with any other normal, moral dilemmas. After the Black Lives Matter movement, Black Pain movies went from a subject matter to a genre. Movies like Sixteen Candles (1984), Clueless (1995), Legally Blonde (2001), or even 13 Going on 30 (2004) are about White teens and adults going through normal problems and coming of age stories but never seeing that applied to Black men and women. Some notable movies that feature Black men and women in a light that has nothing to do with racism or prejudice are movies like She’s Gotta Have It (1986), Seventeen Again (2000),  Zapped (2014), and even Dope (2015). These are examples that show young Black people of many ages having normal everyday problems and worrying about if their crush likes them back or not. 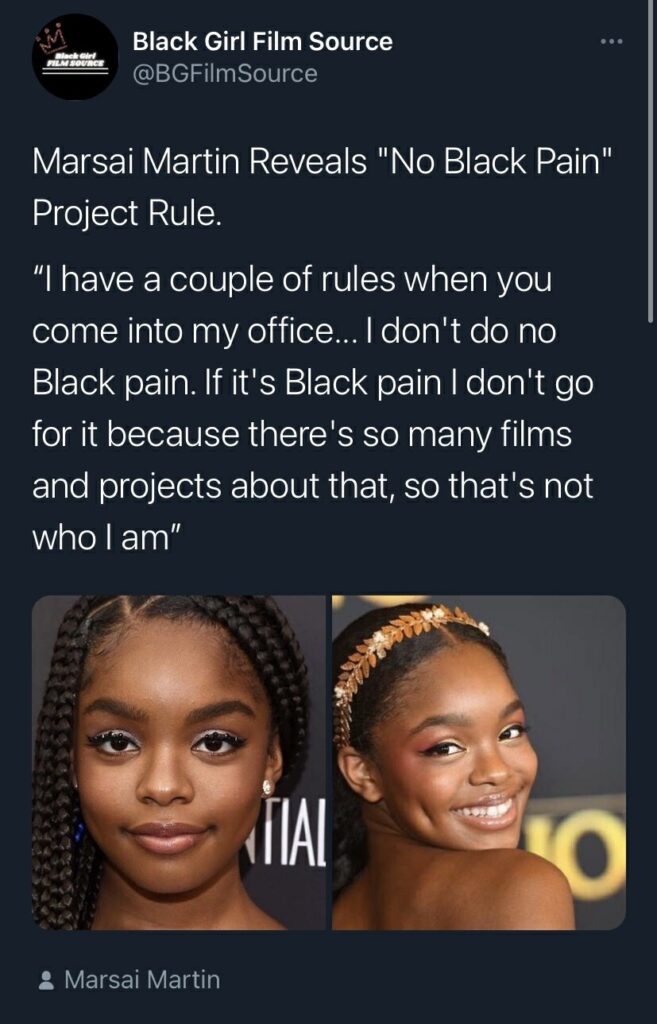 Marsi Martin recently broke the record for becoming the youngest executive producer in Hollywood history. Marasi Martin, a two-time winner for the 2021 NAACP Image Awards, starred in the ABC TV sitcom Black-ish and Little (2019).  She told Holywood Reporter and her response was tweeted, “I have a couple of rules when you come into my office. When you come into my office, don’t give me this — I don’t do no Black pain. If it’s Black pain I don’t go for it because there’s so many films and projects about that, so that’s not who I am. I want to make sure that it is diverse and real in its own way.” Her response being tweeted out let people know in the industry that from now on this is what she will be working on or not.

More Black actors and actresses are recognizing that this Black Pain genre is vital to show the reality of many Black Americans, but not the only narrative being shown. By not participating in Hollywood projects where the main subject is Black trauma to show White Hollywood that is not the only thing to happen to the Black Community.

Previous ArticleNEXT UP: R&B/Soul Duo Rubber Talks Climate Change, Frank Ocean, and Finding Inspiration In All Music
Next ArticleRap or Go to the League? J.Cole Does Both
NIPSEY HUSSLE TUC RECAP