Words such as “disgusting,” “sickening,” “heartbreaking,” and horrifying” can and should be used to describe this week in America. With days following America’s independence, African Americans have AGAIN been reminded that this “Land of the Free” is truly not free indeed. Why, you ask? Simple; two reasons: Alton Sterling and Philando Castle. Following these horrific killings, celebrities have risen to the challenge and have begun to stand up and speak on these injustices that we continue to go through. 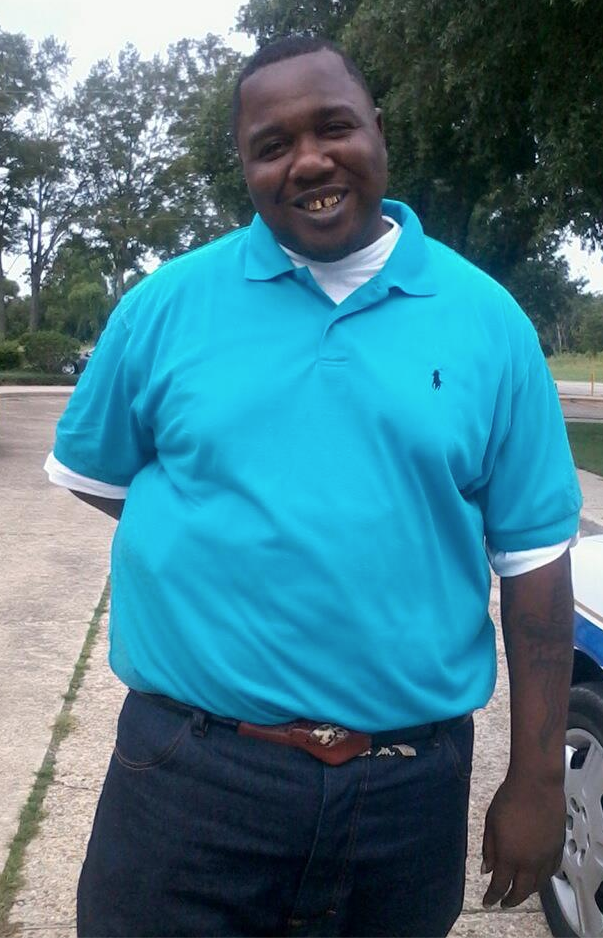 These young men will forever be etched into our minds and NEVER forgotten. In Baton Rouge, La., Tuesday morning, police authorities viciously gunned down 37-year-old Alton Sterling. This father of 5 was cruelly shot both in the front and the back multiple times while outside of a convenience store by Louisiana police authorities. Sterling was simply selling CD’s (in which he asked permission from the convenience store owner to do so) outside of the store when he was aggressively approached, and slammed onto a car. Following this unnecessary action the authorities then used a taser on Sterling, got on top of him while yelling at him and telling him not to move. The policeman closest to Sterling’s legs then screamed “gun” and instantly shot at a subdued Sterling. Sterling did have a gun but he never attempted to take it out of his pocket nor use it in this altercation that cost him his life. Protests instantly followed after this horrific event. 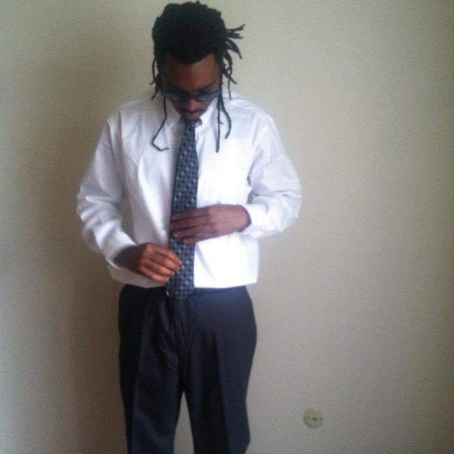 Immediately following this revolting injustice, Americans woke up on Thursday morning (still battered and heart broken from Sterling’s death) to yet another story of yet another INNOCENT African American male killed by police authorities. This time, in St. Paul, Minn., on Wednesday evening, 32-year-old Philando Castile was brutally murdered in his vehicle, during a traffic stop, in FRONT of both his girl friend Diamond Reynolds and 4-year-old daughter. The police officer asked for Castile’s license and registration, he obeyed but also made it known that he had a gun permit and a gun as well. Reynolds documented the entire event with the help of Facebook’s live stream. In the video you see the policeman approach the car, Castile calmly comply with the policeman and reach down to show he was licensed to carry the gun that he possessed, and the policeman ultimately shoot and kill Castile.

In the video Reynolds calmly documents everything the policeman does. The video graphically displays Castile’s killing and both Reynolds and her daughter being detained and removed from the vehicle. Afterwards, videos surfaced on social media where Reynolds revealed that although the police stated they released her and her daughter, she was not released until 5 a.m., she was separated from her daughter, and was not allowed to speak with anyone. According to Indianexpress.com ,Diamond also stated that the police tampered with evidence and shifted the blame of her boyfriend’s murder onto both her and her daughter.

While there has not been much time to truly process what we have seen and witnessed this week, celebrities are taking their stand, using their influence to bring awareness to these recent killings and voicing the pain, frustration and anger that we all our feeling inside. 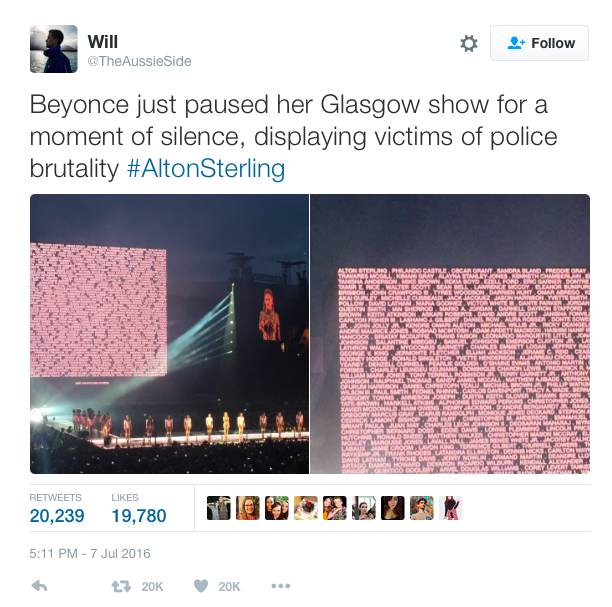 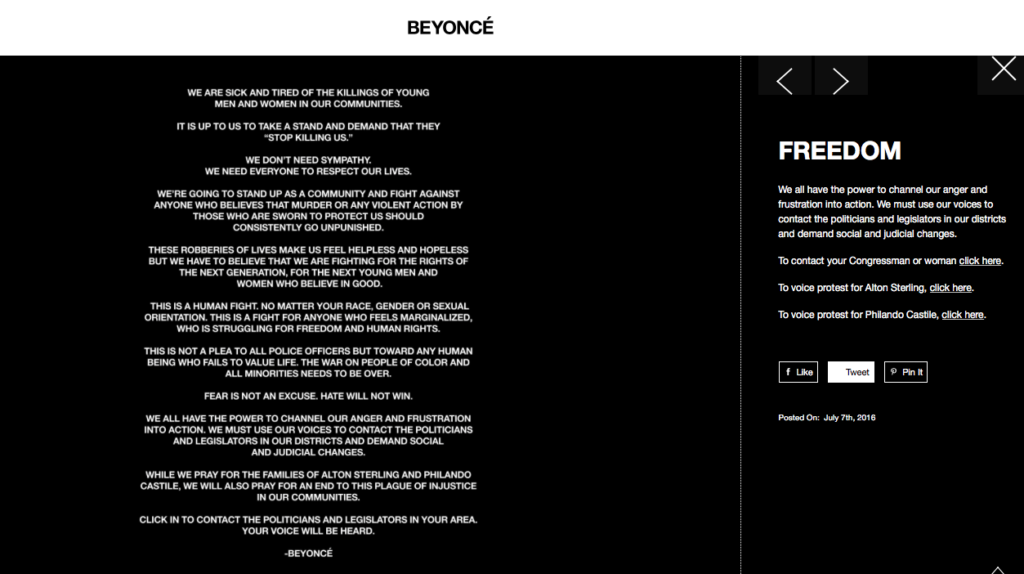 One of the biggest artists of our time, that’s right, Beyoncé immediately got in formation following these killings and updated her website with a letter where she passionately spoke on the issues at hand. She called for people of color to take a stand. She reminded everyone of the power that we possess as a unit and ended the letter with a link for fans to contact their local congressmen or women and “voice protest” for both Alton Sterling and Philander Castile. Also, during her tour stop in Glasgow, Scotland, the superstar paused her show for a moment of silence, and dedicated her “Freedom” performance to the Alton Sterling and Philando Castile while all the names of those who have fallen victim to police brutality shined across the screen behind her. 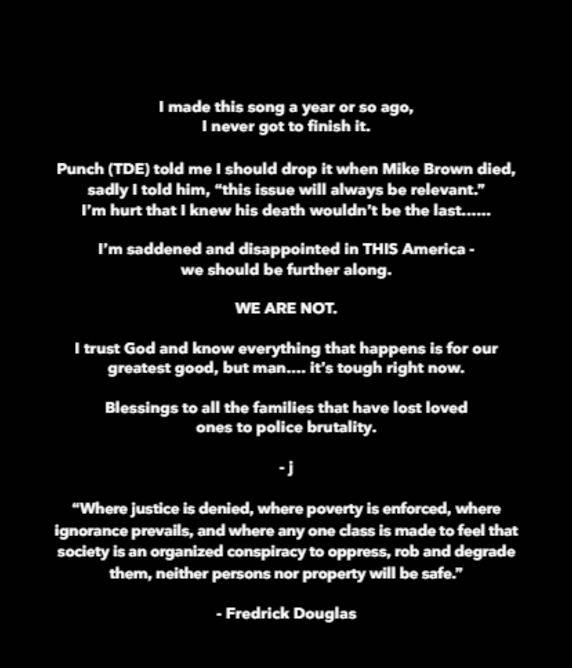 Jay Z followed in his wife’s footsteps but went further and released a new song titled “Spiritual” on Tidal. Along with the release of the song Jay also released a statement where he wrote that the song had already been in the works. He writes, “I’m saddened and disappointed in THIS America – we should be further along.” In the song Hov passionately raps, “ I am not poison, just a boy from the hood that, got my hands in the air, in despair, don’t shoot, I just want to do good.” 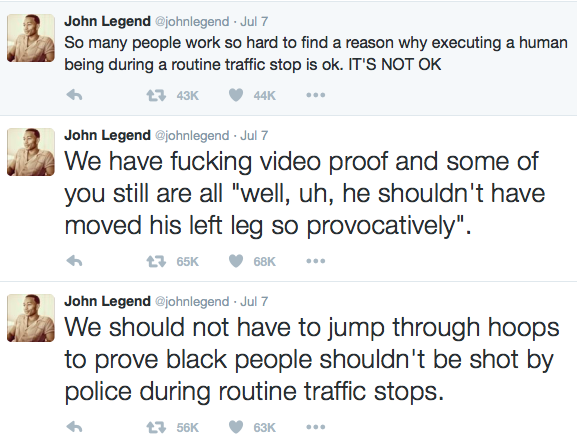 G.O.O.D. Music member, John Legend used his social media to passionately voice his anger, hurt, and frustration of yet another life lost due to police brutality. In one tweet, Legend wrote, “So many people work so hard to find a reason why executing a human being during a routine traffic stop is ok. IT’S NOT OK.”

One of the media’s newest targets, actor/activist Jesse Williams also shared his disgust of the shootings that occurred this week. Williams brought attention to himself when he delivered a beautiful, passionate, thrilling speech about racism, police brutality, culture appropriation and more at the 2016 BET Awards.

My heart hurts more than I ever thought it could. Feelings such as: anger, pain, sadness, hurt, fear, confusion, disgust, disbelief, and so much more filled my heart as I watched the coverage on these recent events. I could feel the tears trying to fill my eyes as I watched Alton Sterling’s son break down screaming for his father and as I watched Diamond Reynolds break down explaining how she was treated after she witnessed her boyfriend being shot and killed. Although I physically did not go through anything, I have never experienced such heartache in my life until this week. Mentally, emotionally, and physically I was drained.

As a 20-year-old African American male, I truly fear for my safety. I fear for the safety of my grandparents, parents, cousins, uncles, aunts, and friends. I was brought up to respect all authority figures regardless of who they were and that includes the police. As a child, I enjoyed seeing the police because I felt safe; I knew I was ok, and that the danger was gone. Now, when I see police, my first thought is “I can’t wait to get away from here.” My palms sweat intensely, my body tenses up, and I say a brief prayer for protection. I know I haven’t done anything wrong but I still feel unsafe and unsure of these people, because I don’t know nor do I trust the mindset of these people in these uniforms.

Too many times we have seen innocent young men and women of color die because of police brutality; the cycle has not ended. This is not a joke nor a game! These people are gone; they cannot go home to their families; someone’s son is gone; someone’s father, brother, grandfather, and/or uncle is gone; someone’s aunt, mother, sister, and/or grandmother is gone. I refuse to live in fear that my future children could end up dead. We cannot let them keep getting away with murder. Enough is enough! Stop killing us; our lives matter!

The time for sitting and allowing more people of color to fall victim to the brutality is over! We cannot let those who have fallen victim to police brutality go in vain. We must fight back, but we must do so properly and orderly. We have to educate ourselves. Just as you don’t go to war without a strategy or plan, you must not do the same in this instance either. The time for change is now.

We must firstly unify and become one. How can you expect to deal with any outside obstacles when there is division and strife within our own group? I have already seen many discourage, mock, and demean others for simply showing care and posting their hurt, and frustration on social media. The negativity must end! Instead of attacking each other, we should come together and utilize this technological blessing known to us as social media. We have to rid ourselves of ignorance and embrace knowledge. We need to bring more awareness to these issues.

However, it doesn’t end there; social media and awareness is only the FIRST step. We must go out, we must protest (but we must do it the correct way). Instead of retaliating with more violence, we need to truly sit and have a pure intellectual dialect on methods and steps to fight this social injustice that continues to happen.

Lastly, we cannot, under any circumstances, stoop to the level of which we have seen in the many police brutality cases. Killing the police (or any violence towards them in general) is completely and utterly unacceptable. That is just as disgusting as the killings we keep witnessing. Peace will never come from violence. In order to get the change we truly desire we have to meet the hate with love. Whether policeman or a person of color, we cannot continue to lose more of these precious lives.

Our ancestors and those who fought for the freedoms we enjoy today were pathfinders, innovators, and trailblazers. We must get back to the basics and fight for what we believe in. We have to get back to the fundamentals of standing up for what believe in. Most millennials of our generation are very lazy. We expect everything to be given straight to us without any work being done. That approach will accomplish nothing. We have to roll up our sleeves and put in some work. 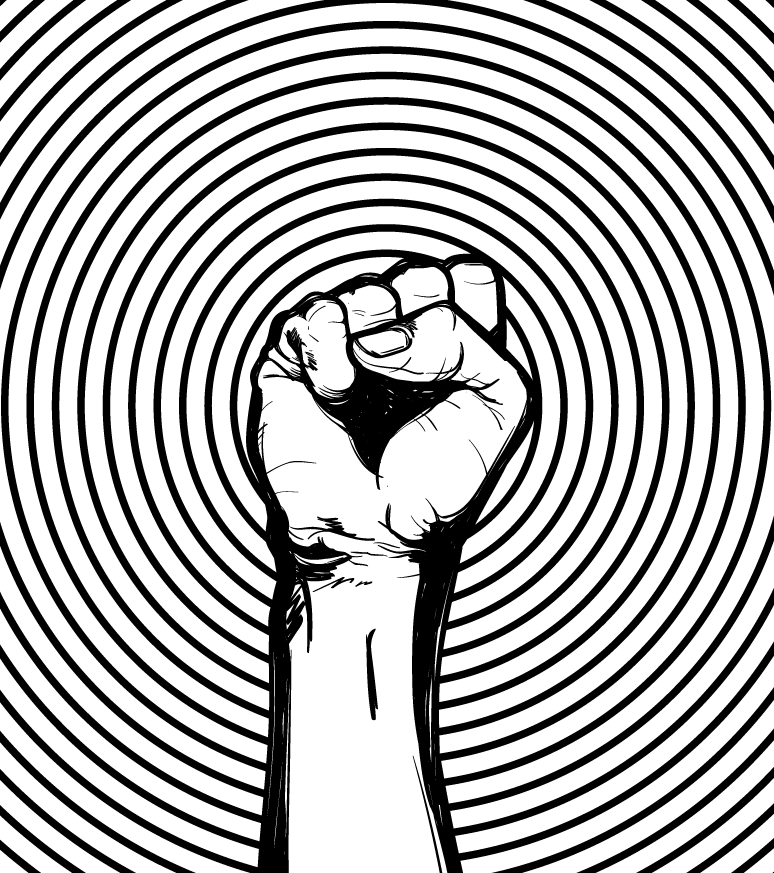 If it means that you have to stand-alone and create your own organization to be heard, go for it! We need to set up more peaceful protests, marches, and sit-ins. If we expect to be taken seriously, these are the steps we must take. We cannot let this be a moment where we are inspired but then months from now we’re back stagnant. All of the social media posts, hash tags and tweets will do nothing if we don’t ACT on that truth. We must get active. Again people, the time for change is now!