Abortion: Should Men Be Entitled To Have a Say?

The 2019 Alabama abortion ban was set to impose a near-total ban on the medical procedure and was to start last November, but in the meantime, a legal challenge against the bill has delayed implementation. Though women make up 51% of Alabama’s population, its lawmakers are 85% male. There are only four women in the 35-seat Alabama Senate, and they are all Democrats. Thus, this implies that it is male politicians voting to get these laws changed, which leaves a sour taste in the mouths of many. The question of why is at the forefront of the minds of women around the world: why should men have any say whatsoever in what happens with a woman’s body? It seems as if opinions alter from one corner of the world to the next.

For example, in 2002 a new Chinese law was put forward which meant that a man’s right to have a child had just as much weight as the right of his wife. The bill passed caused uproar – one Shanghai scholar told China Daily that the law “may cause harm to women by partially emphasizing the right of men to have a child”. “It may constitute connivance in rape within marriage,” he said. “Wives who refuse to bear a child may incur unfair blame and demands for compensation”. In March of that same year, a Chinese man named Mr. Li sued his wife of 18 months for infringing his right by having an abortion. He told the courts that he was enraged that his right to become a father was violated. However, in the UK, there is no legal requirement for a man to have any say in whether or not his sexual partner chooses to go ahead with the pregnancy. In both 1987 and 2001, British men attempted to prevent their spouses from terminating the pregnancy, and both times were denied any right to have a say in the matter. 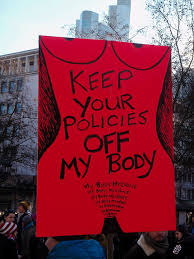 Furthermore, it is vital that more countries around the world realize that continuing with a pregnancy is the mother’s choice, and hers alone. The fact that this is still an ongoing issue in so many places across the globe just goes to show that more has to be done to help progress women’s rights. American author Armin Brott stated that “A woman can legally deprive a man of his right to become a parent or force him to become one against his will”, which is something more men need to understand. Although the current generation has been involved in hugely impactful movements such as the Me Too campaign, fourth-wave feminism has a lot further to go.

Do you believe men should have a say in abortions?