Will LeBron Win Another NBA Finals?

After the Warriors nearly swept the Cavaliers with a 4-1 series victory in the finals, critics of the former champions are more vocal than ever.  Some people believe the Cavaliers no longer have the potential to win against what appears to be an almost unstoppable Golden State team.

In particular, LeBron critics have used this opportunity to completely undermine him from being a contender for the G.O.A.T (Greatest Of All Time), which may be fair enough if you use Michael Jordan’s success in the NBA finals as a baseline for comparison.

Jordan is known to be the epitome of basketball and aside from his tremendous scoring titles, he is most notable for having a perfect finals record with 6 wins in total (1991-93 & 1996-98).

However, comparing the player’s skill side by side leaves a lot more room for debate, especially given LeBron’s scoring records, length of career, and NBA finals attendance. Nonetheless, despite all the underestimations, it more than likely you will see LeBron back with another ring.

Although the Cavs were only able to lock in a victory in game 4 of the series, Lebron averaged nearly 40 points a game, so it’s tough to pin  the defeat on him alone.

With this recent NBA Finals, people seemed to have gotten really wrapped up with which team wins and which team losses to determine who’s better, but that’s not necessarily the case. In all honesty the Cavaliers and the Warriors stack up pretty well against each other, but it ultimately comes down to matchups. 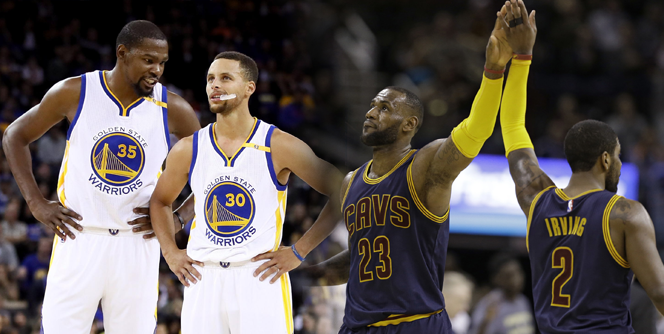 Looking at total points for each team’s top scorers, it seems that the Cavs have the upper hand when the matchup is Durant, Curry, Thompson, and Green Vs. Lebron, Kyrie, Love, and Smith. Within the top 4 scorers for each team, Golden State’s total points peaked at 447 compared to 454 for the Cavs. However, the difference in the 5th man is quite substantial…with the add-on of Iguodala for the Warriors and Jefferson for the Cavaliers, Golden State’s total points shoot up to 490, but only 483 for Cleveland. This trend only increases as we add more player match-ups from both teams.

In the previous year, the rosters match ups were closer, so it came down to which team could adjust to the other’s playing style, but with the addition of KD (Kevin Durant), the Cavs were essentially outmanned, however, not against Golden State’s big three, but rather their bench. It took 3 games too many for the Cavs to finally adjust to the Warriors style of play, but as soon as they did, the far more prepared warriors accounted for the Cavalier’s adjustment and outpaced them for the championship.

It’s clear that the Cavs will be doing some recruiting to boost up their scoring, but after looking at the numbers, they don’t need a bunch of super stars, but rather someone to contend with Golden State’s 5th man and bench roster.

Golden State will for sure be back in the finals next year, and there’s almost no doubt Lebron will be back as well, but the new editions to the Cavaliers will determine if he walks away with the ring.