The 19-year-old freshman at UConn is doing something that hasn’t been heard of in NCAA history. There have been many WNBA legends and superstars that have come and gone through the UConn Women’s Basketball program over the years. Sue Bird, Diana Taurasi, Tina Charles, and Maya Moore just to name a few. Paige Bueckers seems to be setting herself up to follow right in the shoes of her alumni.

After last night’s overtime win against the top-ranked South Carolina Gamecocks, Bueckers set a new record in UConn basketball. Paige Bueckers became the first player to score 30+ points in three consecutive games. In the final minutes of the game, the freshman guard scored all of the Huskies’ final 13 points to lead a comeback going into overtime. Paige Bueckers would finish the game with 31 points, 6 steals, 5 assists, and 4 rebounds.

UConn women’s basketball coach Geno Auriemma spoke about how Paige Bueckers fits into the scheme of the program and her recent success.

“She’s very slow, and I say that with a high degree of appreciation,” Auriemma said. “She takes her time … she’s like when Jim Brown used to run. When she gets the ball, she’s like, ‘Should I go to that hole, that hole, that one … what’s the best decision for me right now?’ She waits until the absolute last minute, and nothing rushes her. So you can’t make her play faster than she wants to play.”

“When you’re as good a shooter as she is … she really just has a lot of confidence in her ability. If she can get one off, she thinks it’s going in. I marvel sometimes at how hard she has to work because of the defensive attention that she gets every night. She’s just good.”

Paige Bueckers possess skills that are usually seen in veterans. Since stepping up to the challenge, Paige leads her team in scoring (21.1 ppg), steals (2.6 spg), and assists (5.6 apg) while shooting close to 56.2% from the three-point range. While the Huskies seem to be in first place in the Big East standings (14-1), many see the powerhouse team with a few holes to be fixed as the season progresses. 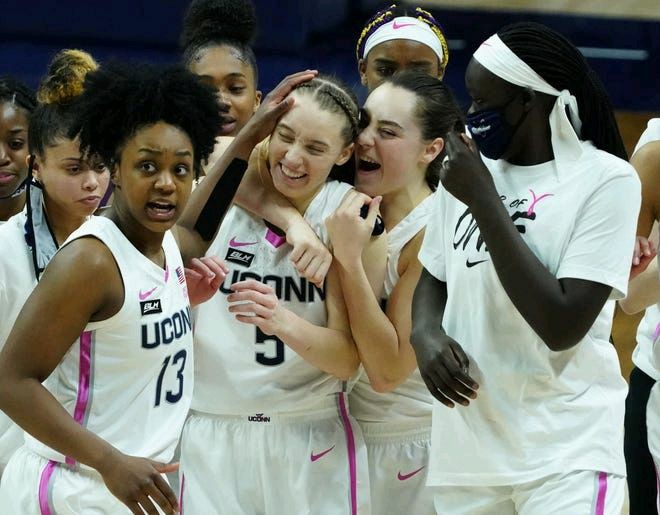 “It’s still crazy to me,” Bueckers said of how her UConn career has started. “Just the blessings that I’ve been given, just the opportunities I’ve received. It’s all just so crazy to me that I’m here playing at my dream school in huge games like this with an amazing team and coaching staff. Every day, every second, every minute, I’m super grateful to be here.”