Bianca Smith made history this week and broke a barrier for women in sports. On Monday, Boston Red Sox announced the hiring of Bianca Smith, 29, to be the next head coach of their minor league team. With the hiring, Bianca Smith becomes the first Black woman to coach in professional baseball.

It has been a long time coming for Smith as she has a long history with baseball. From 2013 to 2017, Bianca Smith worked as a director of baseball operations at Case Western Reserve University. Smith also has experience in Major League Baseball. The trailblazer spent some time interning with the Cincinnati Reds and Texas Rangers. Bianca Smith has spent the better part of her career inside the inner workings of baseball operations. In 2018, Bianca Smith worked as an assistant coach at the University of Dallas and then at Carroll University in Wisconsin.

Bianca spoke to MLB Network about what this means for her career and women alike.

“I think it’s a great opportunity also to kind of inspire other women who are interested in this game,” Smith told MLB Network. “This is not really something I thought about when I was younger. I kind of fell into it being an athlete. So I’m excited to get that chance to show what I can do.”

The Red Sox have been vocal about their praise for Smith. The organization is welcoming Bianca Smith with open arms.

“She was a great candidate coming in,” Red Sox vice president of player development Ben Crockett, who helped spearhead the hire said, according to the Globe, “She’s had some really interesting experiences and has been passionate about growing her skillset and development herself.” 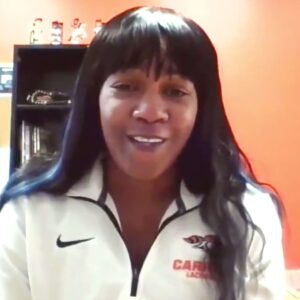 This recent hire comes on the heels of women in sports breaking through. Bianca Smith joins other women who have gained way in the race for equality in sports. Last season, Alyssa Nakken, became the first woman to coach on the field during a major league game. Just this past November, the Miami Marlins hired Kim Ng to be the team’s new general manager, making her the first woman GM and first Asian American GM in Major League Baseball history.

Spring training is still two months away, set to begin on February 27th.