Blink and you may have missed it. NBA All-Star Weekend was a little different than what we may be used to in previous seasons. Festivities took place this past Sunday in the city of Atlanta. Due to the nature of the current health risk that COVID-19 poses, events were crammed into just one day. Everything was capped off with the All-Star game with both teams playing for their own black-focused organization. Earlier this year, the NBA and NBPA came to an agreement on a few conditions in order to host the annual event. Chris Paul, President of NBPA, advocated for the league to use the press and media to better help solve injustice in America.

The day started off in the worst possible way with NBA stars Ben Simmons and Joel Embiid both sitting out of the game due to contact tracing in connection with the virus. Both players visited a barber who had tested positive for the virus in Philadelphia. The news came just as the events began. It’s unclear if the duo will have to sit out for their upcoming Thursday game. New Orleans Pelicans Zion Willamson took Joel Embiid’s place, ending the night with 10 points in 14 minutes.

“I could hear whatever crowd was in here, I could hear the temperature rise a little bit,” Curry said when asked about his final shot on the TNT broadcast. “I knew I had to knock it down. It was a fun battle.”

The NBA Skills challenge saw Indiana Pacers’ Domantas Sabonis overcome the odds to secure the contest. As both Chris Paul and Domantas Sabonis both earned a first-round bye, it became a battle of the big men. Sabonis managed to get by Robert Covington and Julius Randle to head to the final showdown. Coming down to the final shot, Sabonis beat out Nikola Vucevic to win the title. Sabonis finished second in last season’s skills challenge.

“It was fun,” Sabonis said. “I wanted to come out and make sure I got it done this time.”

Shortly after, it was time for the main event of the night. Right out from the gate, Team LeBron held the lead and the game, backed behind Giannis Anteokounmpo’s record-breaking perfect shooting (going 16 for 16), Steph Curry’s 28 points, and Damian Lillard’s 32 points. Despite shattering records, Antetokounmpo mentioned it was the least of his worries.

“It actually wasn’t,” he said. “I was just trying to just play. When you’re around guys like Damian Lillard and Stephen Curry and Chris Paul, it’s just easy. Nobody is worrying about me. I’m just playing one-on-one, nobody is double-teaming. If you feel good, then I feel good that it will be good. I just get up and have fun and just try to get as many shots as I can.”

Giannis’ performance earned him the NBA All-Star Kobe Bryant MVP award. The Greek Freak expressed his feelings towards earning such an award named after the late basketball legend.

“Obviously, I’m extremely happy at just having the award with the name of Kobe Bryant in my house,” he said. “It’s a great feeling. I wanted to win the one last year really bad and I had a chance to win because I felt like I wanted to have the trophy in my house, but this year I wasn’t even thinking about winning it, I was just thinking about having fun, and I had the opportunity to play well.

“My team played great, and I was able to just win it and to have the trophy with the name of Kobe Bryant, it’s amazing, and I know he would be happy. Yeah, I know he’d be happy.”

Guard Anfernee Simons became the first Portland Trail Blazer to win the award. Simons was able to beat out New York Knicks’ Obi Toppin and Indiana Pacers’ Cassius Stanley to win the coveted award.  In the final round, a new rule was introduced called “Judge’s choice.” Simons and Toppin had one dunk each in the round, and instead of a score, the five judges selected a name, with Simons receiving three votes to Toppin’s two.

It was Simons’ last attempt that caught the attention of the basketball world. Simon said his goal for the last dunk was to kiss the rim, but he also wanted to make sure he didn’t hit his head. 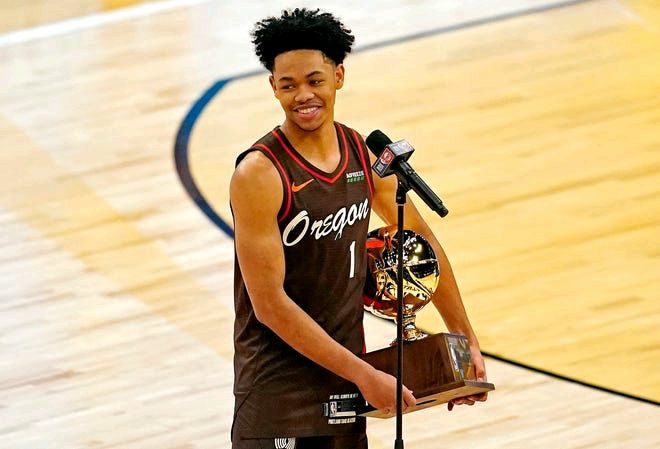 “In practice, I never actually kissed the rim, but I was like, ‘I gotta commit to it,'” Simons said. “I tried to put a mouthpiece in last-minute, but it didn’t fit in my mouth. I just scratched, and I’m just going to emphasize the smooch face so people know I’m next to the rim and trying to kiss it.”