How The WNBA Has Been Leading in Social Justice

The events of August 26 sent a ripple wave across the nation, prompting many pro sports teams and athletes to use their platforms, and speak out for social reforms.  The shooting of Jacob Blake, a 29-year-old unarmed black man, motivated to the Milwaukee Bucks to walk out on their playoff games, which led to many teams and players doing the same.  Three NBA, three WNBA, three MLB, and five MLS games were postponed.  The postponed games and reactions from pro players spread an even stronger message for the need for social justice.  Although the call for attention from the NBA was needed during these times, the WNBA has been leading in social justice for years. 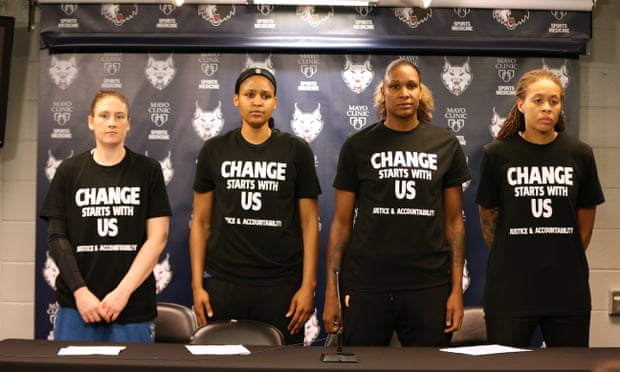 The summer of 2016 was the start of the WNBA’s legacy on social justice.  Maya Moore, Seimone Augutus, Rebekkah Brunson, and Lindsay Whalen – the captains of the Minnesota Lynx – started their warm up’s by wearing a shirt that read “Change Starts With Us. Justice and Accountability.”  The back of the shirts read the names of Philando Castile and Alton Starling with a graphic of the Dallas Police Department.  The captains were pleading for change, as well as giving their condolences to the shooting victims.

“If we take this time to see that this is a human issue and speak out together, we can greatly decrease fear and create change,” Moore said. “Tonight we will be wearing shirts to honor and mourn the losses of precious American citizens and to plea for change in all of us.”

The WNBA continued to send there message in early 2017.  During the rage when President Trump was criticizing NFL players for kneeling during the anthem, many WNBA teams were also taking a knee or staging a walk off the courts while the national anthem was playing. 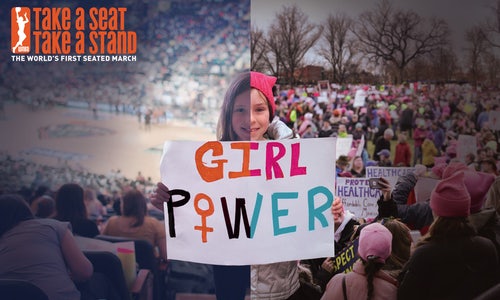 Starting the 2018 season, the WNBA launched the program Take a Seat, Take A Stand, which was a new women and girl’s empowerment group.  When fans bought a ticket for any game, they would have the opportunity to donate $5 or any amount to several organizations, including It’s On Us, Bright Pink, MENTOR, Planned Parenthood, GLSEN, and the United States of Women.

“For 22 years, the WNBA and its players — women playing at the highest level of their sport — have stood up as role models for millions of women and girls,” Lisa Borders, the former WNBA president, said in a release. “With Take a Seat, Take a Stand, we are proud to come together as a league to stand with our partner organizations, our fans, and the many inspiring women raising their voices for change in the current women’s movement.”

Just recently in July, the WNBA and WNBPA started a new platform: The Justice Movement, and the creation of the WNBA/WNBPA Social Justice Council.  The WNBA reported that “The mission of the Social Justice Council is to be a driving force of necessary and continuing conversations about race, voting rights, LGBTQ+ advocacy, and gun control amongst other important societal issues.”