Movie Reviews: An Objective Review of Wonder Woman From A Non DC Fanboy

Last month I wrote an article breaking down why you should have faith in the Wonder Woman film. It brings me great joy to report that many critics and fans were happy with the film. Is the film the greatest comic book film ever made ? No, but the film definitely puts Warner Bros. and the DC Cincematic Universe on the right track going forward with upcoming films The Justice League and Aquaman on the horizon.

The headline of this article states that this is a review from a non DC comics fanboy but it’s also important to mention that this review is also coming from someone who is not a feminist and easily caught up in the whole women kicking ass and leading men into battle propaganda. Here is my breakdown of some of the key elements of the film. If you haven’t seen the film then I highly encourage you to bookmark this article, watch the film first, and then come back to it. You’ve been warned ! 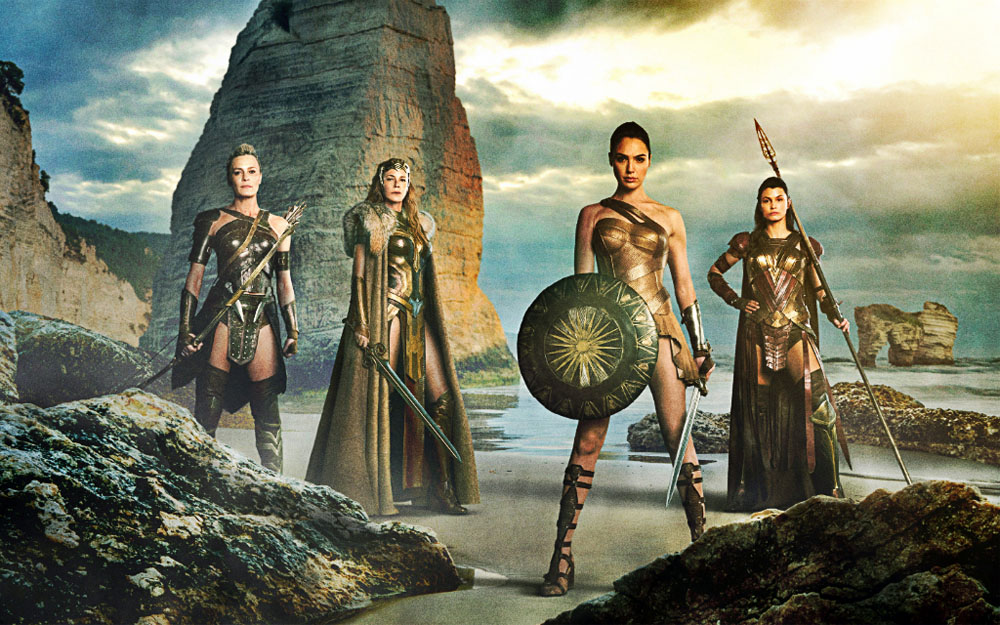 The movie opens on Themyscira, an island filled with nothing but Amazonian women. We are greeted with a young Diana [Wonder Woman] running to the battlefield after escaping from her tutor. Diana’s desire to be a warrior troubled her mother, Queen Hippolyta ( Connie Nielsen ). She would later succumb to the pressure and allow Diana to be trained by her Amazonian sister, Antiope (Robin Wright). The first act concludes with the introduction of Steve Trevor ( Chris Pine ), whom Diana saved from drowning in the ocean. Steve led a sea of men accidentally to Themyscira in which an all out war broke out between the Amazons and the enemy soldiers. The end resulted in the death of Antiope who dove in front of a bullet to save Diana. Although Robin Wright was only on-screen for approximately 10 minutes, she didn’t waste a second of her time in the film and her character’s early death was definitely a bummer as I truly enjoyed her presence in the film. From there on, Diana would disobey her mother’s wish of staying on Themyscira and instead headed with Steve to London to continue the war in hopes of killing “The God of War”, Ares, as she believes that he is the reason for World War I taking place. 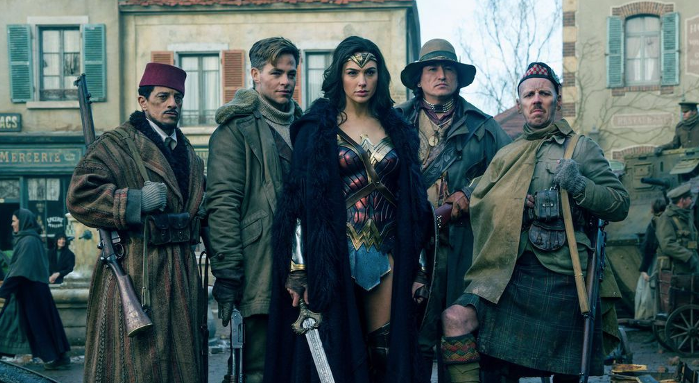 It must be noted that Chris Pine owned his role as Steve Trevor. The movie never presented him as this pure cookie cutter good guy but only as a soldier that would do anything to complete his mission [more on that later]. Diana and Steve’s journey in this movie was perhaps the most enjoyable aspect of the film as audience members got a chance to witness Diana’s growth as this over confident and defiant woman adjusting to a world filled with men and where women are not seen as fighters but just assistants to men and becoming a woman that understands her power but realises that humans have flaws and that her powers can’t nor are they meant to be a solution for all of mankind . We also witnessed Steve’s growth of a man who initially was somewhat amused by the myths of Greek Mythology and his reluctance to rely on the powers of Diana on the front lines of war. but would later come to love and understand all that Diana has to offer. Together along with characters we meet along the way: Charlie (Ewen Bremner), Sameer ( Saïd Taghmaoui ), and The Chief ( Eugene Brave Rock), they learn to rely on each others gifts to help rid the world of war as well as develop an organic friendship on screen that I haven’t seen in many films yet alone Superhero films.

As much love and appreciation that I have for this film, I also have my gripes. It’s unfortunate and ironic that my biggest gripes with this film is also the same gripes that myself and many fans of the Marvel film franchise has and that is the villains. A superhero film is only as good as it’s villains. You don’t believe me ? tell that to fans of the Dark Knight and Spider Man 2 and they will tell you that would made those films work were The Joker and Dr. Octopus respectively. In Wonder Woman, it wasn’t so much as the villains not being menacing and true villains as that part they had down. The problem is that the motives and abilities of these villains not named Ares aren’t properly explained. The first group of villains that we are introduced to are Dr. Poison (Elena Anaya) and whom we were led to believe to be Ares, General Ludendorff ( Danny Huston). The problem with Dr. Poison was that her mannerisms were too over the top and were better suited for an animated DC show or movie. We also weren’t properly told her motivation behind creating her potions and testing it out on her subjects. We knew from her behavior that it was important to her as was her book of formulas that Steve stole as he was serving as a spy but the reason for why it was important to her wasn’t properly explained nor was the reasoning for her mask. General Ludendorff [who was a real life German general ] was every bit the part of ruthless and menacing. However, why was he able to inhale the potions that Dr. Poison created unlike the others which gave him superhuman strength and increased stamina  while the others succumbed to death ? It was for those reasons that I initially believed him to be Ares. However, towards the latter act of the movie it turns out that he wasn’t Ares after all as Diana was able to easily dispose of him and yet the war around her didn’t stop as she was so sure would be the case had she killed Ares. You might think that my reason for believing that Ludendorff was a terrible villain was because he got easily trampled by Diana and while that would be the case if he was actually Ares, the real reason is that he remains a mystery even after his death. Why was he able to inhale Dr. Poisons potions and live ? if those weren’t the same formulas then what was he inhaling ?, and why did he tell Diana as they were dancing in the ballroom that “she knows nothing of the Gods” ? These are all questions that we may never learn the answers to. The reveal of Sir Patrick Morgan ( David Thewlis) as Ares was quite the curveball and yet one that was quite underwhelming. We were introduced to Sir Patrick Morgan in act 2 of the film and he was presented as nothing more than a reluctant ally of Diana and Steve on their quest to help them end the war. He even offered to help quarterback them to victory from his office in London. Just to be clear, I’m not pointing this out as the sole reason as to why it doesn’t make sense for Sir Patrick to be Ares as his plan was very well executed as to why he made the decisions he made along the way but because his appearance leads you to believe that he should be doing these things . Basically what i’m saying is that he doesn’t look like a threat whatsoever and I mean that as no offense to the actor’s credentials. Ares is suppose to be this intimidating and physical God like figure and while his powers looked cool on screen and the backstory that was laid out in the climactic scene was laid out to perfection [can’t emphasize that enough ]for how he was able to manipulate humans to do his bidding and how he was cast away by Zeus whom is the father of both himself and Diana, it didn’t stop me from being sucked out of the immersion of the film due to the lack of believability I had of David portraying Ares although his acting was superb ! 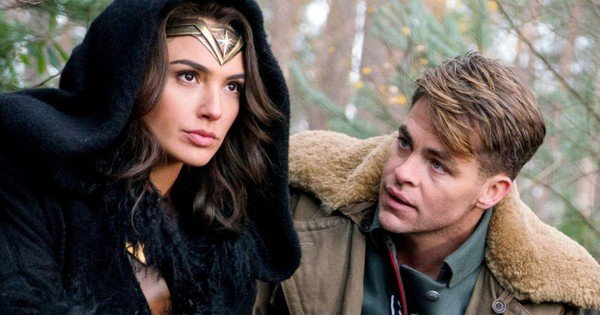 Overall ,the film taught us two valuable lessons. The first being that mankind is flawed which is what Diana came to realize during her battle with Ares and that sometimes we learn our greatest lessons through tragedy which is what Diana also learned when she watch Steve, the first man she will come to know and love sacrifice his life to save the world. It was through her emotions of witnessing the death of Steve that Diana was able to learn of her true powers and defeat Ares. Although the film has a few pacing problems and issues with one side villain that was over the top and lacked motivation, another side villain that wasn’t fully fleshed out, and the big boss who although had all the charisma in the world, but just wasn’t physically imposing enough, it doesn’t deter from the fact that this is the best DC film to date since the creation of the DC cinematic universe and one that finally has the film franchise on the right track thanks to its incredible origin story of  such an iconic comic book character. While it’s not the greatest superhero film ever, it’s definitely in the conversation for being one of the best superhero films that doesn’t belong to the Marvel Cinematic Universe and that is saying something.

I give Wonder Woman a solid B+

Did you watch the film ? Sound off in the comics on your thoughts about the film.