NEXT UP: With The Pride of Opelousas ‘THAT NATION’

Straight from Louisiana, Yung Dezzy-D and Lil Bill Swavey of That Nation are ready to change the game. Their song “My Whole Life” has over 2 million views on YouTube and the duo even received Master P’s attention. That Nation gave TUC Magazine the insight on their musical influences and future plans. The duo just dropped their new banging single “Drop The Money”.

Massiel: What inspired the name That Nation?

That Nation: It comes from two different groups that we were involved in back at school.  I had my group SWAVE nation and Dizzy had YOUNG’N nation and we combined the names.

Massiel: As I watched your videos on YouTube, I noticed “My Whole Life” has over 1,000,000 views. How does that feel for you guys? Did you expect it to get that many views?

That Nation: It feels great. When you think that all those people take the time to watch us. I mean we’re ecstatic about it. We don’t really get that a lot out here. That’s kind of groundbreaking for the city as well. People are really looking at that in a positive way.

Massiel: How has your city inspired your music?

That Nation: The city plays a big part because sometimes there are ups and downs and they ride with us through the wave. They’re really riding with us the whole way. 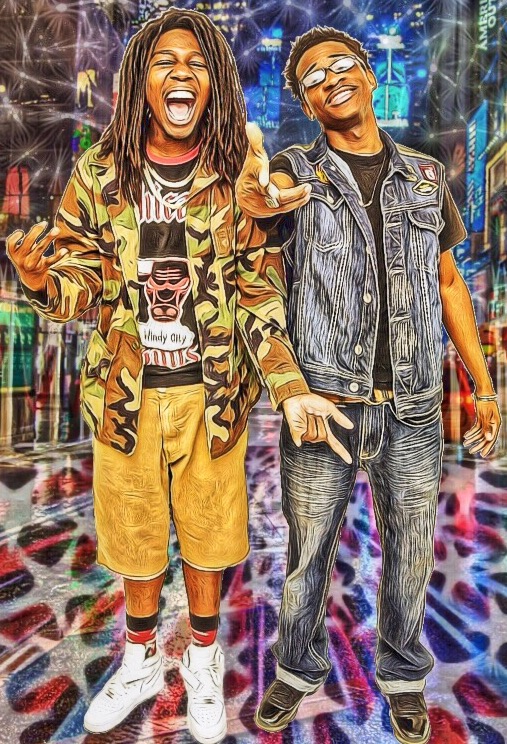 Massiel: You guys got Master P’s attention and got to work with him, now how was that experience?

That Nation: That was through the roof. Being able to work with such a legend. When we did the video shoot, it was all business. We got in and did what we had to do. We never had a video shoot go that quickly and in that fashion. It turned out so well that we took a lot from that. We wish we had more time to actually really talk to him and get some pointers out of him. He was always on the move like you would expect him to be.

Massiel: Are there any other artists that you guys dream of working with one day?

That Nation: No doubt, No doubt. A lot of artists out there play a part in the creative process… I feel like naturally, it is going to happen. A lot of artists, like Young Thug, Lil Wayne Eminem, and more. They play a big role inspiration wise. A lot of people in our area and even outside of our area. A lot of people are dope and we look forward to working with them.

There’s no one bag that we want to be placed in when working with artists. There will be different categories of artists that we consider ourselves working with. We want to have the type of name that you can’t put it into a box. We want to work with all types of genres. Whatever kind of artist comes our way, we would love to work with.

Massiel: You guys are both young and successful, so what advice do you have for our audience?

That Nation: Most definitely grind. Never let anybody tell you that you can’t do something. Branch out and do different things. If one type of situation doesn’t work for you don’t get down. Try something else. Try all angles.

Massiel: Are there any projects we should look out for?

That Nation: Most definitely. We have everything we need for our new album. We don’t want it to be rushed. We want it to be very planned out. It is coming in the near future.

Massiel: What does True Urban Culture mean to you guys?

That Nation: Being in the music industry, or just hip-hop basically. Everything is revolving around the youth and everything the youth is going through. For me personally, Hip Hop is the real culture of the urban community. To me, that’s what it means, the good and the bad that comes with that. It means speaking on the struggle and coming up from nothing. We speak true urban culture in our music.

Make sure to listen to That Nation’s new single, “Drop The Money”