South Florida is slowly but surely becoming the New Atlanta. Isaiah Rivera, better known as Wifisfuneral is South Florida’s new star on the rise and is taking over quicker than anyone expected. Wifisfuneral newly found fame and success earned him a spot at this year’s Rolling Loud Festival in Miami, Florida. The annual festival came back better than ever and this year, Wifisfuneral was featured on Day 2 of the three-day festival. While the 2017 Rolling Loud Festival featured rap’s biggest names in the industry, Wifisfuneral was definitely an anticipated act by all the fans.

Besides Earl Sweatshirt cosigning Wifisfuneral’s raps and flow on Twitter, Wifisfuneral is mostly known for his mixtape, Black Heart Revenge. Black Heart Revenge, which was released back in May 2016, went viral and landed on iTunes Top 100 Hip-Hop chart. He also seems to have recollected over 8.5 million streams on Soundcloud as well.

Wifisfuneral rap journey began back when he was seven years old, he explains. He was raised in South Florida but born in the Bronx. According to Genius, Wifisfuneral father wasn’t around much in his life but was a freestyle battle rapper from the Bronx. While there may have been influences all throughout, Wifisfuneral’s main inspiration comes from rap legends like MF Doom, Lil Wayne and Eminem.

Since his big shot to fame, Wifisfuneral came out with “When Hell Falls” back in late January 2017. This project includes 12 tracks and releases a very personal view of his life and current struggles. While previously associated with rapper Earl Sweatshirt, there is definitely a correlation between the lyrical content of their music. 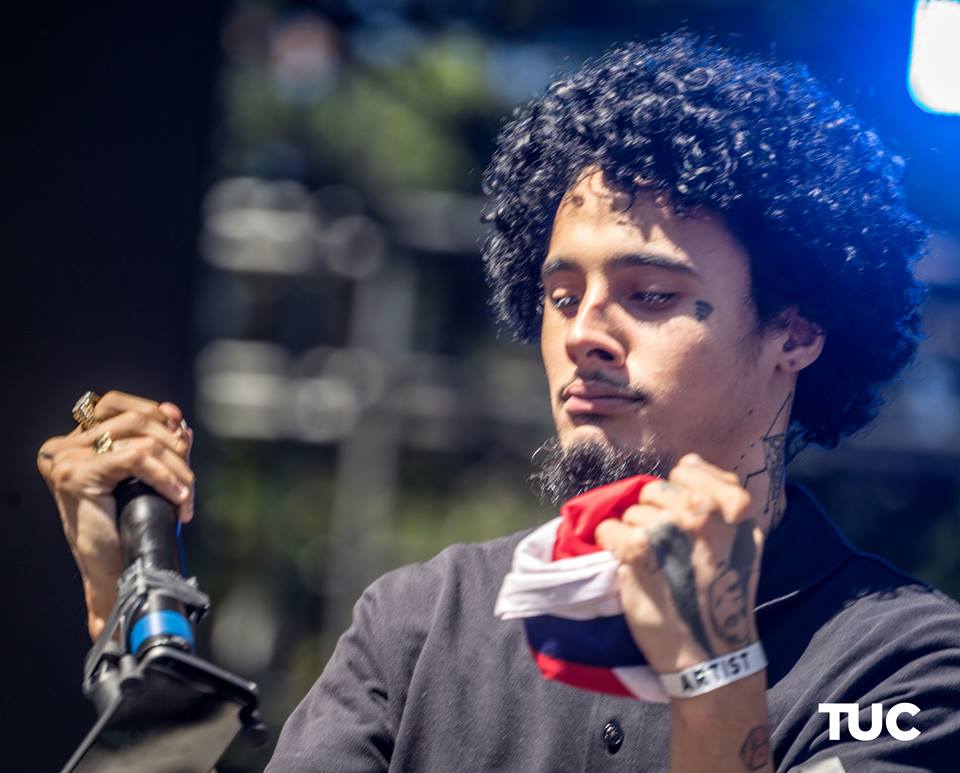 Wifisfuneral along with other new upcoming rappers such as XXXTentacion, Rich Chigga, Denzel Curry, and numerous others took the stage at the 2017 Rolling Loud Festival.

Read our latest interview with Wifisfuneral as we caught up with him at the 2017 Rolling Loud Festival in Miami:

Paulette: How does it feel to be a part of Rolling Loud Festival being that this festival was sold out, biggest hip-hop festival and audience of 40,000 people?

Wifisfuneral: It was the biggest and most positive show I’ve ever done. There was an amazing energy the whole weekend, and it was really cool to perform in front of that many people down in Florida.

Paulette: What is your usual pre-show turn up routine?

Wifisfuneral: I actually isolate myself from everyone so I can get in the right headspace. I usually just tell everyone to leave me alone.

Paulette: When did you start rapping?

Wifisfuneral: I started rapping when I was 7 years old.

Paulette: Where do you get your inspiration from?

Wifisfuneral: I get my inspiration from MF DOOM & many other legends.

Paulette: Where did the name Wifisfuneral come from?

Wifisfuneral: The name came from when my best friend & my DJ, DJ Scheme. DJ Scheme and I first became friends. It’s a long story, but one of his good friends passed away from some shit we don’t talk about and it was really hard on him. I was the only person who was there for him so that’s where the funeral aspect comes from. Wifi simply means that we want to be connected with everyone across the world.

Paulette: What’s it like collaborating with XXXTentacion and Ski Mask? And how did you meet them?

Wifisfuneral: X & Ski are my brothers so I guess you could say working with them on music shit is super easy/smooth. We met at Bruno’s house on some crazy shit about 2 years ago but ever since then we’ve been family.

Paulette: Is there any other artist you would like to collaborate with in the future?

Wifisfuneral: I would love to work with Earl Sweatshirt, Tyler The Creator, Rae Sremmurd, Frank Ocean, Playboi Carti, & hella other people. I just want to make some fire ass music.

Paulette: Any new music or new project you’re working on?

Wifisfuneral: I have hella new music & a fire mixtape coming soon YA HEARD.

Paulette: Are you going to be touring soon? Will you be coming to Atlanta?

Wifisfuneral: We’re touring soon as hell in the US & Europe so be ready. Atlanta on that shit for sure.

Wifisfuneral cult fan base has been growing and with his momentum, there is really no stopping him anytime soon. We are very excited to see where his music takes him and see what’s next for Wifisfuneral.