NEXT UP: Exclusive Interview With Foggieraw

Right before the semester ended at Syracuse, I sat in the Bronx, NY and went through my soundcloud. On my feed I came across a song called “Back by 4” featuring Penthouse, Mannywellz, & Rare Logic by an artist from the DMV named Foggieraw. I closed my eyes and simply said to myself, “Damn, who is this kid?” As I hastily did some research, I became musically blessed. What captured me about his sound was the fact that the creation is so abnormal from majority of the songs I’ve heard before. I haven’t heard an artist lay down something this divergent since I first heard Chance on Acid Rap. This is one of those must keep listening situations. Being from the south, I already brewed a connection but being in the Bronx at the time urged me to put the entire city of New York on. Let me hand y’all this light and let him speak for himself. Check out the exclusive interview with Foggieraw below:

How did you come across the name Foggieraw?

There was a Nike basketball commercial with Mo Williams, KD (Kevin Durant), Iggy (Andre Iguondala), and Rashard Lewis. It was like, “we just be hyperizing, why y’all be criticizing?” You don’t remember that joint?

Nah, they were rapping?

Yeah they were just rapping. Mo Williams’ name was Fog Raw so a couple of my friends would just call me that. That was my Instagram name but I kept deleting my Instagram. Every time you deleted your Instagram you couldn’t use the same name, so the next time I made an Instagram I just named it Foggieraw, and that was it.

Ok I fuck with that though. So how did you start making music? How did you adopt hip-hop?

My first year at college, in 2012, I knew one of my friends who rapped. I had like 5 other friends and we were trying to rap too, so we all used to write our raps and go to his studio. Everybody else was trash but he was like “Dang, you’re alright so I’ll keep messing with it.”, and  it just started like that.

At what point did you sit down and start taking it serious?

It was summer of 2012. I wasn’t really good like that back then but that’s when I was like, “nah, this is what I want to do and this is what I have a passion for.” I didn’t tell people that because everybody would’ve thought I was crazy. I was on Youtube getting like 30 plays and saying “Oh, this is my passion”. So I just kept it real low-key and kept on working at it. But that’s when I knew, summer of 2012.

Summer 2012; so what happened that summer? Was there anything that motivated you or was it just a realization?

Low-key there was this rapper named Lecrae and he dropped this mixtape that was just fire. So I was like, “Damn, I need to get on it, I’m playing.” I was like “Alright, let me put a mixtape out.” and that mixtape is not on the internet, y’all can’t hear it. It’s trash but I did it. It was a step in the right direction, part of the learning process.

So what was the first project you released for the people?

The first project was called Rice for Breakfast. I did that in 2013 and that’s the one I’m proud of, like that’s my first project. You heard that before?

Yeah, of course, it’s on your Soundcloud.

Wait pause, how long have you been creating? Because you’re saying that’s way down and we just discovered you a couple of months ago. How far in are in terms of projects and songs?

Like 3 (projects), and then everything that came out in 2015. But i deleted a lot of them because they weren’t really good.

So you seem like you are your biggest critic.

100%, nobodies gonna be harder on myself than I am. Even the songs I put out, I always hate them. I hate them until the day that I put them out, but that’s just how I am with myself.

I couldn’t say one but I can give you three or four. Kanye because he’s not supposed to be good. He can’t sing or  really rap that great but he just worked hard and he was super creative. He made it work and now he’s one of the best artists ever. I like Chamillionare. People are always like, “What??”. Chamillionare is like my dog. He just has bars. I like Pimp C because of his swag. He talked about different things but for the most part it was about pimping things. He did it in so many different ways; I thought it was so tight. Then I’m going to go to Wale from here. Wale is like the hometown hero. We all look up to Wale.

What was it like bringing your music to Bowie State? I’m always curious to know how college artists thrive in that environment.

Everybody kind of knows me but not everyone knows that I do music yet. Some people know I do music and some people don’t, but we’re working through it. Soon everybody is going to know but it’s a process. We’ve done Bowie’s Got Talent and I’ve done open mics when I’m out there, just trying to do a lot of stuff. 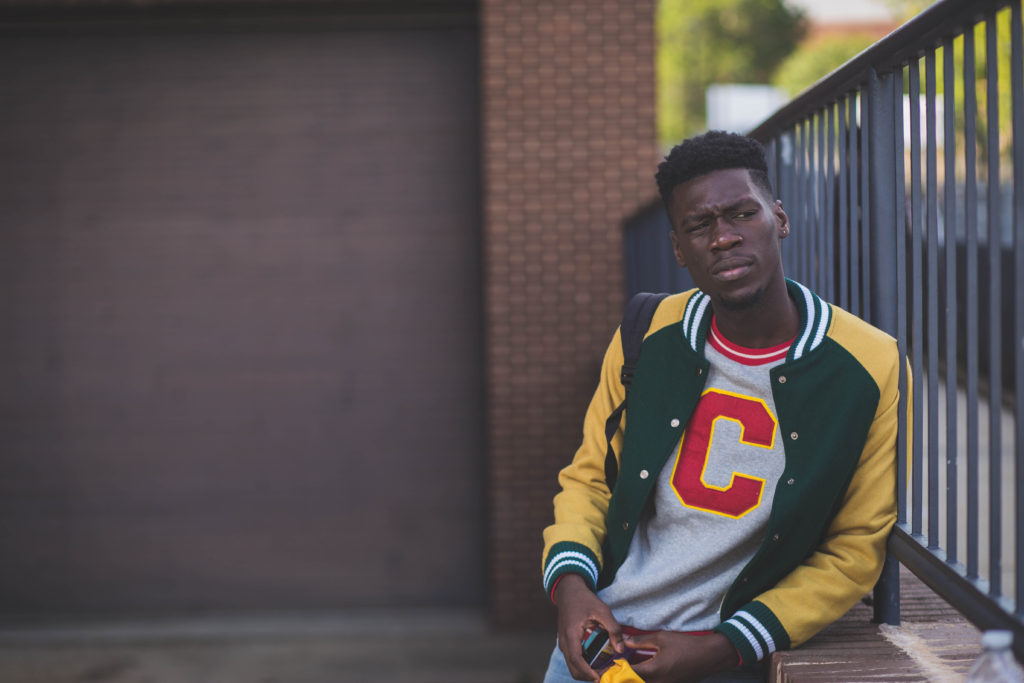 The interesting thing is that people love your music but they can’t figure out the lyrics. What’s up with that?

You know how you have classical New York rappers, right? I was always trying to do that but I always thought my voice sounded weird. I was like, “Why can’t my voice sound like them so I could do regular rap?”. I was always trying to force it but I was like, “Man it’s not working so let me do what I want to do.” So I just started talking in my normal voice. I would make voice memos when I’m making songs and sometimes I wouldn’t remember all of the words. When I tried to put in the words, it was like, “Dang, it sounds better with sounds than it does when I actually put a word.” People say they hate it but I think people actually like it.

What’s your favorite song that you made?

I feel like that was the biggest risk that I took on a song. I didn’t know how people were going to feel about it. I did a lot more mumbling, saying “nigga” a lot, just being a little extra but I like the way we crafted it. It didn’t have a hook but it didn’t have a verse. It just flowed so that’s my favorite song.

If you could put everyone in the world onto Foggieraw, is that what you would play?

Dang, I would probably say “30 and 10”. I feel like that’s the song that changed everything. I didn’t even like it when I made it so I had it for like 2 months. I used to play it for my girl and some friends and they would ask why I didn’t put it out. I was like, “Man, nobody is going to like it.” When I finished it and put it out, it started going crazy. It was kind of weird but I think everybody liked it.

Describe a studio session for me.

We don’t get lit. I usually go for 2 or 3 hours so I’m real serious. I don’t want to waste time on the clock so we’re working through a lot of things, trying new ideas, and trying takes to make sure we get it right.We usually do one whole studio session of straight ideas. We go to the mic and just start saying stuff to see what we get. Then we do another one before trying to knock it out.

Bring me in, what is the music scene in the DMV like ?

It’s a lot of trap music and a lot of trap rappers but they’re all tough though. You either have to be a trap artist or a hipster artist, otherwise you’re just a random artist that just lives here. Are you familiar with Mannywellz? He’s super talented and he sings. Everybody is just like, “He’s cool.” But if you’re a trap rapper they’ll be like, “Yeah, he’s a DMV artist.” People probably wouldn’t say I’m a DMV artist. Honestly I’m just a guy who makes music.

Speaking of that, where do you want to take your music?

Do you think you’ll be dropping an album anytime soon?

I think I am because the singles work. I put so much into one song. If I put my everything into a song, people are only going to hear three of them. Why don’t I put each song out and let it get it’s chance to do work? That’s where the number theme started with all of the songs. It was supposed to be mixtape but i was like, “Nah, let me keep doing singles.” “30 and 10” popped off a little crazy so it changed things.

Was that the first song that made you realize this music thing was for you?

No, it was way before that. That was the first song where people started to know me for my music. I believed in it when I did a song called “The L Word” on Rice for Breakfast.

Locally people said they liked it, so I thought I could do it. I just wanted to do something creative. I wanted to do something cool, something that nobody has done. I remember when I used to get 30 plays when I put a song out. I had to work and make better music but it came through. I’m the only one who has my back so I had to make sure my songs were A1 before I put them out.

Do you think you’ll end up signing to a label?

Kanye West might get me off of the strength that he’s my favorite artist. I can’t sign to an artist though, I have to sign to a label because we’re both artists, unless they’re not really into music anymore. But in a perfect world I wouldn’t want to sign. I would if the deal was good and they could help. My entire life people didn’t expect anything from me. Labels downplay and I feel like I worked so hard for nothing. When a label says,” He’s cool.”, the fire in my mind is gone but then I’m like, “I’m never going to sign with y’all.” We’re just trying to make everybody that overlooked us feel bad at some point.

That’s real. I think we gave you the proper introduction to New York and Atlanta. Lastly, is there anything you want to say to the people?

All Photos Courtesy of Jesse O