Deep Dive: Look Into This Years Rookie Class and How They are Shaping Up so Far

The 2020-2021 NBA season is finally underway, and it’s at an exciting start. With a hectic free agency period and a draft class with a lot of international and diamond in the rough prospects, this season will be one for the books. With a couple of games under the team’s belt, we see many teams we didn’t think would come out and ball out the way they did. Like the Phoenix suns, Atlanta Hawks, Orlando Magic. We had high hopes for other teams, and they are still trying to find their footing with new pieces. Like the Golden State Warriors, Utah Jazz, and Washington Wizards. One thing that I’m looking at is this year’s rookie class. A lot of names I remember seeing years ago on BallisLife’s YouTube page are now in the NBA. It’s like we grew up with them, and to see them make it is a crazy feeling. So far, when it comes to the rookies, it’s too early to say who’s a bust or not. Going from playing 18 and 19-year-olds in college to playing grown men is a humbling experience. With a lot more season to play, let’s look at how some top draft picks are doing so far in the league.

Obi Toppin was a name that kept circulating on draft night. We saw the 6-9 forward and his athleticism at Dayton. We all saw how he got to the basket pretty much with ease and finish phys 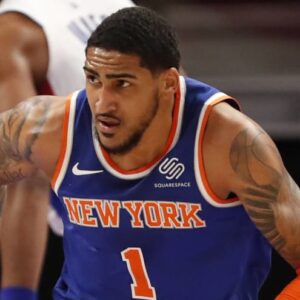 ically at the rim. Toppin was picked 8th overall by the New York Knicks, a team desperate for some youth and talent to build around RJ Barret. Toppin only played one game this season and finished with 9 points, three rebounds, and one assist with 24 minutes played. He suffered an injury from the first game against the Pacers, which later found out was a right calf strain. He shot 25% from the field that game, which is troubling to watch. But I feel when Toppin gets more comfortable and comes back healthy, he’s going to showcase his athleticism and 3pt shot.

Lamelo Ball, the 3rd and final Ball brother, got drafted 3rd overall by the Charlotte Hornets. Melo’s path to the NBA was unorthodox for sure. From Chino Hills High, then going to Lithuania to then Spire Acadamy and then the NBL, his experience is truly one of a kind. Also, Lavar always said that Lamelo would be the most special out of the three brothers. And his journey to the NBA kind of proved Lavar right. Heading into the draft, a lot of teams were skeptical of Ball. He played well in Australia but then suffered an injury midseason. 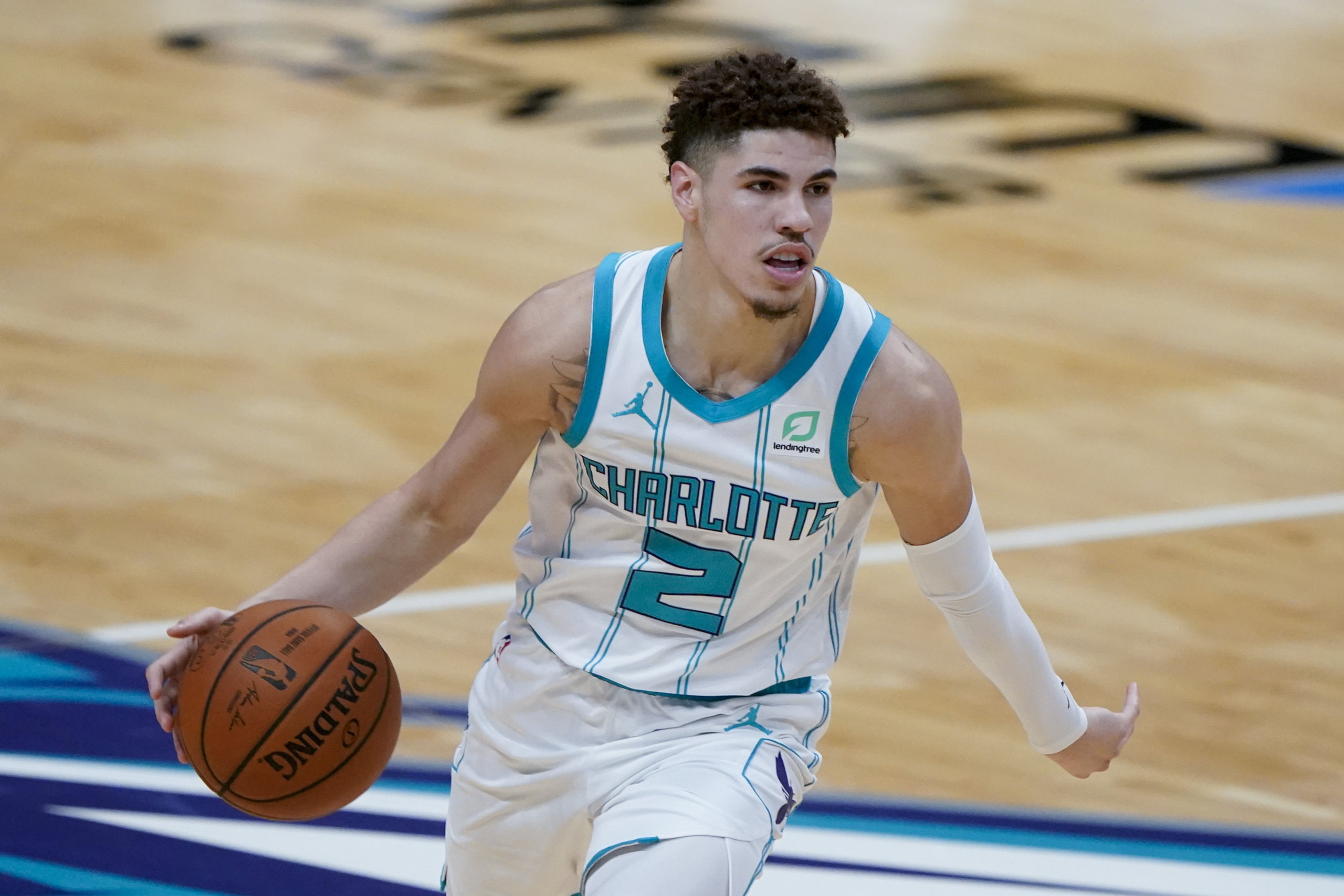 With that, there was only so much recent film to go off of. But as we all watched Melo grow up in the spotlight, you could tell he matured on the court and off the court. During pre-season, Ball showed his impressive passing ability for a point guard who’s 6’8. In his first regular-season game, he had 0 points, one rebound, and three assists.

As you know, the bust comments were everywhere after that game. Then the next game, Lamelo dropped 13 points, six rebounds, and one assist. I can see that Melo has a short attention span on the court. He doesn’t let one game or possession get to him mentally. He also has a sense of confidence, with his hands on the Ball. Something that a lot of NBA analysts say his older brother Lonzo needs to do more. As the season progresses, if Melo continues growing and playing the way he has, I can see him being rookie of the year, no problem. You can quote that for me too. 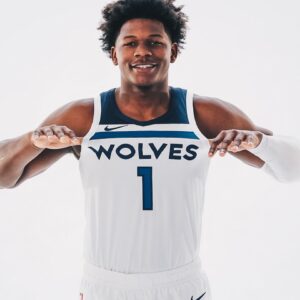 Georgia’s very own Anthony Edwards put his bucket getting abilities and athleticism on showcase at UGA. The 6’5 shooting guard could bully anyone in the lane to go get a bucket in the paint. As a shooting guard, Edwards ran through the lane with a lot of physicalities. Also, having a pretty decent shot from the field. Heading in the draft, most mock drafts had Edwards going #1 to the Timberwolves. Edwards adds as a weapon to the Timberwolves backcourt with D’Angelo Russell playing at point guard. So far, Edwards has been living up to his hype. Still trying to find his role in the team, he has shown himself as a bucket getter. Whether it’s driving the lane to get a physical bucket or in the corner making a catch and shoot 3. He is averaging 15 points, two rebounds, and one assist. While shooting 42% from the field and 31% from deep, Edwards sets a pretty good foundation for growth. I feel as though once he finds his chemistry with Towns and Russell, he will continue to grow as a player and help the Timberwolves gain post-season success. Lamelo and Edwards are my top runners for the rookie of the year award so far.

Golden State knew they needed a big man coming into this year’s draft, and they and everyone kne 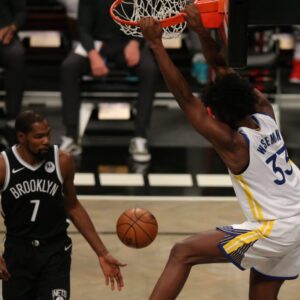 w who could fill that spot with ease and that was James Wiseman. The 7 foot center from Memphis showed a lot in his rare time in Memphis under coach Penny Hardaway. It seemed like he showed enough to be the 2nd overall pick to the Golden State Warriors from his tape and size. Warriors need size and a more prominent presence under the basket. In his first game, Wiseman played very well against KD and Kyrie’s Nets. he finished with 19 points, six rebounds, and 0 assists. He put up some highlights during that game that showed his presence under the basket and his athleticism. In his three most recent games, he has struggled from the field. For Wiseman, he needs consistency, whether it’s points or rebounds. If he can get that down pact, he will be a prolific big in this league for seasons to come.

Cole Anthony had a lot of hype around him out of high school and at North Carolina. But we would all soon hear whispers when Anthony suffered an injury that would hold him out for the rest of his season. Anthony went from being in the conversation of a top 3 pick to maybe not even picked in the first round. Anthony’s road to recovery was tough physically and mentally. On draft night, the Orlando Magic took him 15th overall. You could see Anthony was emotional when it all happened. That showed me a kid who was humbled by the game and hungry to prove something sounds a lot like his new teammate Markell Fultz. 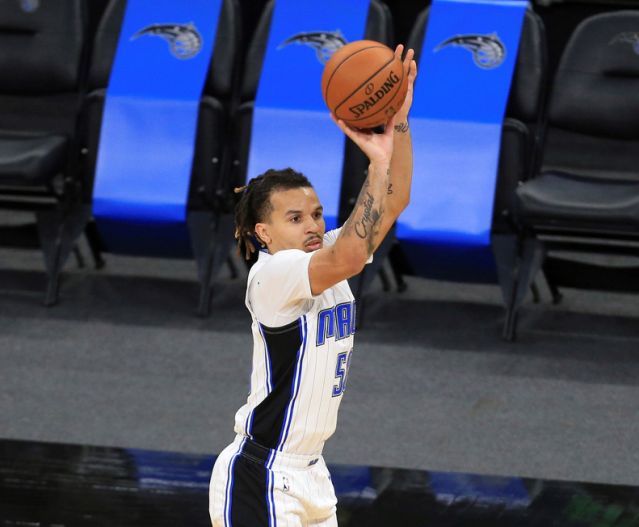 Anthony had an okay first game. With 6 points, two rebounds, and six assists. He has shown that he can pass and facilitate the Ball while he’s on the court. Anthony has a lot of promise even though he has some early struggles, playing behind Fultz, who knows a thing or two about the pressure. I think he will be mentored by him and put in work in the gym. If he can become consistent, I can see Anthony become a vital pass-first point guard many teams wish they had in the league.

This year’s draft class had a lot of intriguing international players. Killian Hayes was one of them that was high up on that list. Killian was born in Lakewood, Fl but would grow up in France. Hayes played at ULM, a German basketball club, before entering the NBA draft. He showed a lot of promise with his passing and athleticism at the point guard position in Europe. That obviously got the Detroit Piston’s attention. Hayes was picked 7th overall by the Pistons. From the past couple of games, he has struggled. Hayes had multiple 0 point games where he played a lot of minutes; it seems like he is in a shooting slump. We also have to consider coming back to play in America is also a big adjustment for 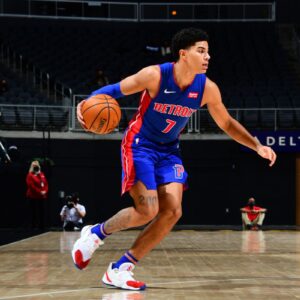 him. Hayes has been looking very overhyped with that even said, and people on social media see that as well. As Derrick Rose as a mentor, I feel like he needs time to adapt to the game more. I feel as though in a season or two, he can become a good all-around point guard for the Pistons; he just needs time to develop. But if he misses the window for improvement, he could become just a role player, but time will tell.

One thing to think about is that the season is still very early. These rookies are still trying to find chemistry and footing in the league. For some, it’s instant, and for others, it’s going to take some time. Overall I think we are in for an enjoyable NBA season with many new teams rising and empires falling. It’s anyone’s league or maybe the Lakers league for a while; it depends on who you ask. No matter who it is, this season is going to be one to watch.