Well It’s About Time! – The Return of The Hip Hop Honors

Female Hip Hop/ Emcees would be not be even CLOSE to what they are today if it weren’t for the likes of queens such as, Queen Latifah, Missy Elliott, Lil Kim, and Salt-N-Pepa featuring DJ Spinderella. So what better way to honor them then by giving them a show dedicated specifically to… them? Although such efforts are LONG OVERDUE, VH1 rose to the occasion, and brought back The Hip Hop Honors (after a six year hiatus), this time honoring the beautiful, charismatic, pioneers of female Hip Hop (and the Hip Hop industry in general) by paying homage to their innovative, captivating, and extensive careers. The program returned on Monday night, at 9 p.m. live from David Geffen Hall in New York City. This year’s program was not only important because it marked the return of the show, but also because it marked the first time in which the program paid tribute specifically to the female bosses of the Hip Hop industry. The theme of this year’s show was “All Hail the Queens.”

What better way to carry the theme of “All Hail the Queens” then by having another queen host such a monumental event? The show’s host was none other than the beautiful, elegant, and influential Eve. Eve briefly honored each of the night’s honorees, stating their contributions to Hip Hop and even to her personally as an artist. She ended saying, “ So, as you can see, women been Hip Hop, women are Hip Hop, and women will always be Hip Hop!” The night consisted of electrifying performances, videos, surprises, heartfelt testimonies, and statements from both the honorees and other artists/celebrities outlining the illustrious careers of Lil Kim, Missy Elliott, Queen Latifah, and Salt-N-Pepa featuring DJ Spinderella.

Before the fun and antics could begin, VH1 took the time to bring awareness to the devastating events of last week by opening the show with the Black Lives Matter founders. Founders Alicia Garza and Darnell Moore gave a bit of a lesson to those who had (and continue to) criticize the movement.

Garza got straight to the point saying, “This movement (Black Lives Matter) is grounded in black people’s dignity, justice and freedom. It’s about love, not violence. This is not just the work of black people. It is all of our work. We will never stop working to bring about a better world for all of us. Joy is also an important part of our movement.”

“Black Activists are fighting to build a world where all forms of violence in Baton Rouge, Minneapolis, and Dallas are no more. A world where Sandra bland, Alton sterling, and Philando Castile might still be alive,” said Moore.

Common appeared later in the show giving a warm speech on Queen Latifah and giving praise to black women “who have been on the front lines in our ongoing movement for justice,” including Diamond Reynolds, who filmed and live streamed the aftermath of the police shooting that killed her fiancé, Philando Castile, after they were pulled over for a broken taillight.”

The show kicked off with a thrilling tribute to one of the most exciting, innovative, and creative, people of our generation, Missy Elliott! The flawless tribute was led by New York native, Remy Ma and featured performances from other greats like, Nelly Furtado, Trina, Lil Mo, and even the host herself, Eve! They performed classic hits like “Work It,” “One Minute Man,” “Hot Boyz,” and “Get Ur Freak On.” Remy Ma took it up a notch and even performed one of Missy’s recent hits “WTF (Where They From).” Remy then gave honor to all of the honorees saying, “Because of you guys, you all opened doors for me to be “All the Way Up,” setting up her “All the Way Up” performance with Fat Joe.

Later during the show there was another tribute to Missy Misdemeanor that enlisted the likes of Fantasia, Monica and Tweet! They effortlessly performed hits that Elliott either, produced or wrote for them!

The program kept the momentum going jumping right to the next honoree, Queen Latifah. LL Cool J swiftly spoke on Latifah’s legacy, reminding those that the Queen firstly started in music before introducing her for the tribute. He used words like “trailblazer” and “visionary” when describing her. He also spoke on her acting career and how she’s contributed much to both the music industry and the African American industry. Phylicia Rashad also gave tribute to Latifah and her Hollywood success. The First Lady Of the United States also joined (through a pre recorded message on screen) to praise both Queen Latifah and Missy Elliott for their work on the “Let Girls Learn” initiative.

Latifah’s tribute was slightly different from Elliot’s. As she has done for many years, the New Jersey native set the rules and led her own tribute! Along with Latifah, came the likes of female Hip Hop forerunners YoYo, Rah Digga, Lady of Rage, Da Brat, and Monie Love. The Chicago musical styled tribute paid homage to the Queen’s trendsetter bars and earlier influential raps. It did not end there. Naughty By Nature shocked everyone when they exploded on stage to honor the Queen with their classic hit “Hip Hop Hooray.” They gave her the utmost respect saying “There would be no Naughty By Nature without Queen Latifah!”

The party continued, as Ashanti, Keke Palmer, Dreezy and Eve gave tribute to one of Hip Hop’s biggest pioneers, Salt-N-Pepa. The artists performed various hits from the rap trio like “Shoop,” “Push It,” and “Whatta Man”

Now, while each and every tribute was great, the best tribute of the night went to no other then Queen Bee herself, Lil Kim. Before the impeccable tribute began, Faith Evans appeared on stage to briefly speak on the legacy of Lil Kim and present her as an honoree. To the world’s surprise, Faith jokingly brought up her and Kim’s interesting, rocky past, but made it clear that the past is the past and that she could not be any prouder and happier for Kim and this moment.

The epic tribute began with Dej Loaf and Lil Mama performing “Crush On You” together. The outfits, wigs, attitudes, and stage presence were PERFECT. Both did a great job, but Lil Mama in particular performed with such high energy and charisma it seemed as if Lil Kim was on the stage!

The show stealing moment came from Harlem native, Teyana Taylor. Taylor literally destroyed the stage the moment the doors opened and the beat to “No Time” started. French Montana also joined her to create a simply dynamic performance. What was frightening was how much she looked EXACTLY like Lil Kim circa Hardcore era. She performed with such passion and energy; it was truly amazing! It seemed like Teyana had been waiting for the moment when she would be asked to perform a Lil Kim tribute, and she nailed it! She did not stop there either. After a brief wig and outfit change, Taylor rushed back on the stage to perform “All About the Benjamin’s” with The Lox. Teyana Taylor was the full embodiment of Lil Kim on that stage. From the looks, attitude, poses, mannerisms, and speech, Taylor did an outstanding job!

Lil Kim’s tribute did not end there. Queen Bee also took the stage to perform some of her best hits! Unlike the previous tribute, Lil Kim’s performance did not quite reach that same standard. It appeared that the queen was either a little tired or forgetful of her lyrics. There were moments during the performance where she just stopped rapping. It did not seem to get better when Rich Homie Quan joined her to perform “ Get Money.” Quan was also forgetful of lyrics and seemed unsure of what he was doing on the stage until Kim came to his rescue helping to pick up where he left off.

It still wasn’t over yet! Lil Kim was also honored with a mini fashion show reflecting on some of her past iconic looks and bold statements. Models like Jessica White and Winnie Harlow gave tribute to Lil Kim and her most recognizable outfits. However, the icing on the cake came when Kim was surprised and honored by none other than Diddy! Although he fooled Kim and made her think he was not going to be there, Diddy delivered a truly heartfelt, loving speech that really summed up the true essence of Lil Kim. He even brought out a birthday cake and had the entire audience sing to her.

The night ended with yet another Latifah performance. She performed her hit anthem “U.N.I.T.Y.” During her performance there was a screen that displayed images of various female rappers. As the images appeared, female rappers of various generations began to fill the stage and sing in unison with Queen Latifah. Rappers such as, Da Brat, MC Lyte, YoYo, Rah Digga, and more joined Latifah, united on stage, and reminded the world that Hip Hop would be nothing without such queens as themselves; All hail the queens! 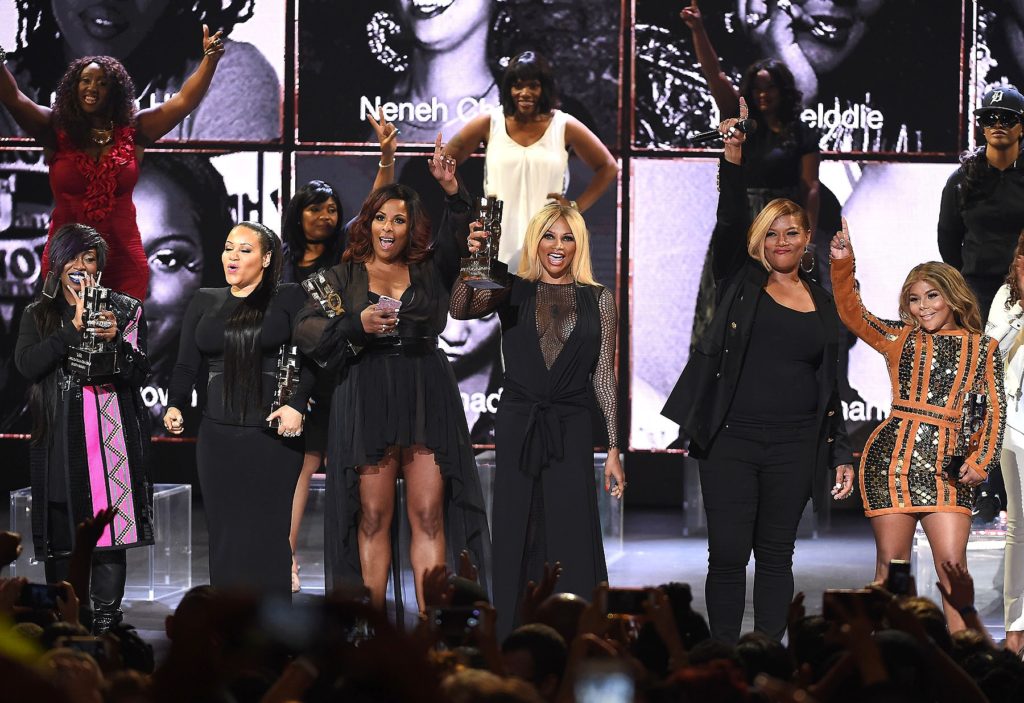 Overall the show was truly amazing. The performances were hot, the tributes were dope and the program was tremendously enjoyable.