Silent Hill 2: An Ode To Horror That Deserves A Remake

Silent Hill 2 stands above the other games in its series and many other video games in the horror genre. While its sequels aimed only to be cheap imitations of what made the second installment successful in the first place, its rivals take decades to come even close to matching. Nevertheless, the game is recollected fondly by all who have come across it or studies its development and unique style. Konami has announced plans for a much anticipated PS5 installment, of which its creator Keiichiro Toyama played no part in, that follows in the modern tradition of a “soft reboot” in the vain of the last God of War, aimed at accommodating newcomers to the franchise. However, could this be a missed opportunity to not reintroduce gamers to what made the franchise so captivating by not similarly remaking the hit title as Capcom did with its own Resident Evil series?

To understand what made Silent Hill 2 such a titan in the industry, one must give credit to the mountain of history inseparable from its genre: horror. Horror is a cross-platform genre that continues to capture the imagination and haunt audiences’ dreams everywhere and of every generation. As the master of cosmic horror, HP Lovecraft once said, “The oldest and strongest emotion of mankind is fear, and the oldest and strongest kind of fear is fear of the unknown.” This idea can be looked at from an evolutionary perspective, given that our ancestors faced all sorts of unknown terrors upon the setting of the Sun. With the darkness came the concern that some beast or nocturnal creature would spring from the night’s black curtain and turn you into a meal.

While modern society has minimized the possibility of that happening, the same primal fear is somehow genetically passed down. As a result, artists of all sorts take advantage of it by creating works that will trigger the response that a sabretooth tiger would in ancient man. This “fear response” elicits a surge of adrenaline that we seem addicted to, which explains why Lovecraft’s books sold so well or why we wait on lines spanning hundreds of feet for a chance to ride a death-defying roller coaster. A more modern example of a master of the genre would be George Romero. His Dead Trilogy undoubtedly takes cues from Lovecraftian horror while continuously spawning its own imitations and tributes.

What made Romero unique was not just his reimagining of the zombie: from a mindless slave of a voodoo practitioner to a cannibalistic corpse, but the way he both used said creatures to convey social critique while being sure never to explain their origin. Romero wanted to use his zombies that seemingly came out of nowhere and perpetrated their society’s collapse instantly. By never bothering to give hints as to how the apocalypse occurred, Romero enhances the perception of fear by letting both the viewers’ and protagonists’ minds race to form theories of their own. The most famous being, “When there’s no more room in hell, the dead will walk the earth. The seeming ease by which the zombies conquer society to deliver the message that regardless of how many concrete foundations we have built, we are still the scared apes that huddled together around the fire for warmth and protection, not knowing if the present night would be their last and whose worlds could collapse at any given moment.

As said before, there are plenty of other works of horror that Romero directly inspired. Silent Hill’s main rival series is Capcom’s Resident Evil, which predates it and takes the zombie genre to its logical conclusion, introducing mutants and a cavalcade of enemies for players to maneuver around strategically or slaughter depending on the installment. However, what makes it fall short, as carefully put by Youtuber Super Eyepatch Wolf, of an authentic Romero tribute is that the series in its early stages depended on cheap horror tricks like jump scares in order to convey that it was a horror game. Think of the dogs of Resident Evil 1 or Nemesis of Resident Evil 3 as examples. Both monsters have terrifying designs that should disturb players on their own and are powerhouses that could quickly annihilate even seasoned gamers. However, they predictably break through walls and windows to the point that they seem like silly obstacles after a while that you can learn to avoid.

Furthermore, they aren’t entirely threatening as the game lets you control trained police officers and secret agents with a mastery of any weapon and combat skills while eventually awarding an arsenal worthy of a small army. The franchise eventually abandoned its horror roots with the hit Resident Evil 4 and became an action series from then on until Resident Evil 7. What made things worse is that both the games and eventual lore expansions explained the origins of its monsters via viral outbreaks, mad scientist experiments, and illegal corporate research, thus eliminating what makes a piece of horror art so gripping: the mystery.

The first Silent Hill game wasn’t at all that different. Choppy gaming mechanics that were typical of its time period, with the only interesting aspects of the game being the story that owed heavily to real-life occult elements. Starring Harry Mason, the game has you travel to an eponymously named town called Silent Hill in search of his daughter. It is only later that you learn the town was cursed to be covered in a mist and surrounded by hellish monsters by a cult that is attempting to resurrect its deity that seems to be a cross between Baphomet and Lucifer. Not at all a bad premise that’s made more personal by the father-daughter dynamic while also one-upping Resident Evil by making the stakes much higher. The game also lets you play as a character that is not a trained fighter, just an average joe that walked unknowingly into a nightmare. Though the game allows multiple endings, they are relatively predictable to your average creative.

It’s Silent Hill 2 that truly shines through as a standalone masterpiece as it serves as more of a spiritual sequel than a direct one, much like the movies in Romero’s trilogy. Paying further tribute to not only Romero but Lovecraft, the cult premise is removed, taking away a cause or explanation for the mist and its monsters and further amplifying the cosmic horror. A further layer of mystery is crafted onto the synopsis via the driving motivation of its new, younger, yet equally inexperienced protagonist James Sunderland. Sunderland receives a letter from his long-lost wife, who tells him she is in a strange place called Silent Hill, motivating him to follow her and investigate. What makes this aspect of the plot so interesting is that his wife had died of cancer before the game started. Through interactions with the other NPCs, the player learns that only they are able to see the many monsters Sunderland battles as he wanders through the town. Every character in the game goes through their own personal hell, fighting ghouls inspired by their own psychological traumas. 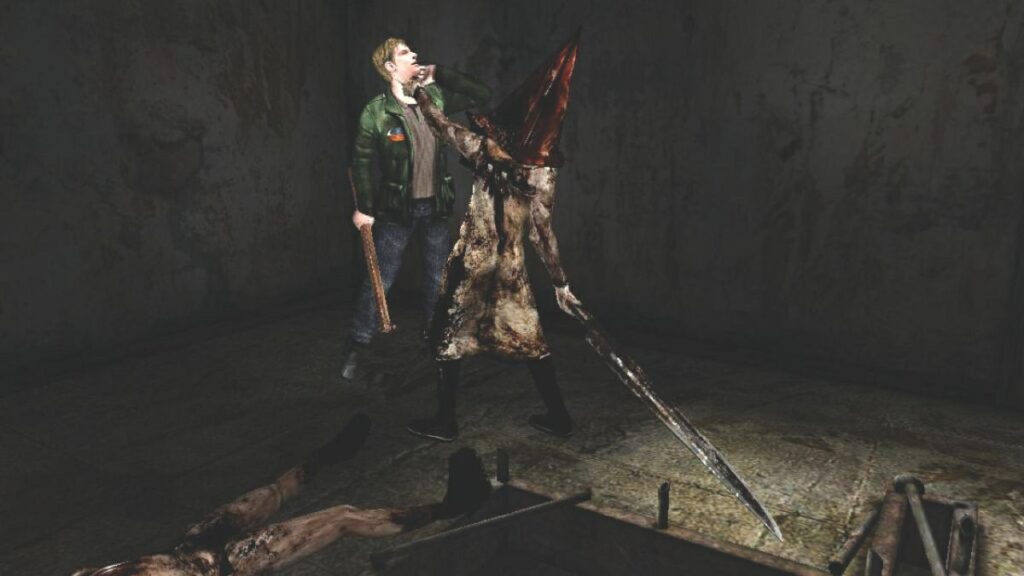 The Pyramid Head is perhaps the most famous creature in the game, it never jumps out of nowhere, but instead, you learn early on that the nearly unstoppable beast is hunting you, slowly stalking the dark halls of the dark apartment building you are trapped in. It slowly yet efficiently drags a huge, phallic executioner blade meant to punish Sunderland for his impure thoughts regarding the nurses that took care of his ailing wife. The monster is aiming to kill Sunderland because he believes it is what he truly deserves, as it is learned that he euthanized his wife to end her suffering and free himself of the burden he believed she represented in his life.

The sequels and movie series that came afterward fail to capture Silent Hill 2′s sentiment, taking many of the famous creatures out of the context of Sunderland’s self-imposed punishment and making them cheap obstacles to overcome. This puts Konami’s reboot under suspicion as they’ve failed to capture the truly disturbing, terrifying story that invoked an emotional response and extreme dread like no other. Silent Hill 2 is built on a pyramid of horror and Freudian psychology that makes every playthrough as memorable as the last. What made it Lovecraftian was that the fear you felt came from a place of the unknown, what made it unique is that you’d probably prefer that the fears remain a mystery as every truth you unravel destroys a part of yourself that exists as the protagonist. Doesn’t the current generation deserve the same kind of thrilling trauma?

Previous ArticleRap or Go to the League? J.Cole Does Both
Next ArticleInstagram’s Latest Feature Allows Users To Formally Add Their Preferred Pronouns
NIPSEY HUSSLE TUC RECAP