DJ Anaïs B Interview: A Successful Woman In The DJ World!

In a male dominated industry, DJ Anaïs B has made herself a force to be wrecking with in the DJ world. Anaïs B is an international DJ born in Paris. Anaïs B fell in love with learning the art of deejaying when she traveled to New York City and her very close friends, who were DJ’s took her in showing her the ropes of how to DJ. Ever since then, she has been working hard to continue her career as a DJ. Anaïs B has played in some of the hottest spots in Paris. Currently, she continues to travel all around the world Deejaying and playing different genres. She is also the main DJ for “Talent Street,” a popular show in Paris. DJ Anaïs B feels comfortable playing any kind of genre of music. She enjoys spreading love to crowds all over the world with her craft. Below we discuss her start in her career, women in the DJ world, current projects, previous projects, and much more. Check out the interview.

Sierra: When did you know deejaying is something you wanted to pursue? How long have you been a DJ?

DJ Anaïs B: I started deejaying almost five years ago, and that’s when I came to NY.  I knew I wanted to pursue it because I could feel the energy of the crowd and I loved it.

Sierra: Who taught you how to DJ and who would you say are your biggest influences?

DJ Anaïs B: Etienne DeYans & DJ Finesse both have a huge musical culture, so I feel very humbled. My biggest influence….. I don’t know there are a few DJ’s & producers that I respect like Diplo, DJ Snake but also music labels like Soulection which have very good talents. Concerning the technical part of deejaying I admire the talent of DJs like Craze and Qbert.

Sierra: I see you perform at spots such as Favela Chic, Wanderlust, and Palais M. in Paris. Who books your gigs? Do you have a manager or are you independent? How often do you travel to do a show?

DJ Anaïs B: Yes, I do. I traveled a lot just this year I have been playing in Romania, Sénégal, Congo, Switzerland, Germany, Guadeloupe, St Barthélemy, NY, Miami, Dubaï… And I probably forgot some. I also play in many cities in France. 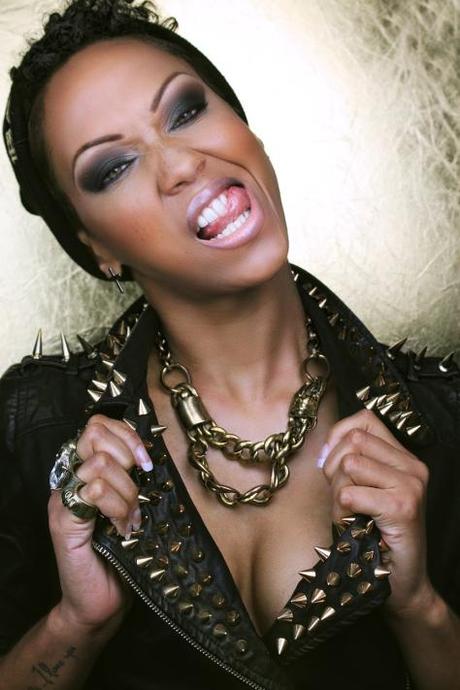 Sierra: Why did you leave Paris to go to New York City?

DJ Anaïs B: I had to go to NY to learn deejaying because that’s where my good DJ friend lived. But I live in Paris.

Sierra: Do you ever feel like you are in competition with other DJ’s?

DJ Anaïs B: I feel like I’m in competition with myself every day working on being better than yesterday. I’m not into that competition thing!

Sierra: Is it different performing in front of American crowds than it is back home? If so, how?

DJ Anaïs B: Yes, it is. Especially when I play hip-hop music because that is where it comes from so they feel the music, they know the lyrics by heart. Also, Americans are more expressive when they like what you do. They make sure they let you know! They come to The DJ booth shake your hands and say that they appreciate you. It happened in France too, but French people are more reserved.

Sierra: How did you end up working with DJ Moody Mike at Olympia? What was it like working and performing with him in front of a huge crowd? How did you guys first meet?

DJ Anaïs B: First time we met was when I was the DJ of a TV show (“Talent Street”) in France, and he came to perform cause he was the DJ of Joey Starr and Nathy (Big rappers in Paris), and Joey was also one of the Jury of the TV Show. I was looking for some scratching lessons to improve my skills. He became my teacher for few months. And that’s maybe one year after that we got to know each other really well, and we became a couple.

That’s when we decided to melt our talent to create the DJ duo Bonnie N Clyde Paris. At that time he was still The DJ of Joey Starr and Nathy (Caribbean Dandee), so they proposed to perform a part of Bonnie N Clyde Paris show during the concert. I feel very honored!

Performing in front of this huge crowd and the mythical venue of Olympia at the Carribean Dandee concert was a blessing. A very powerful experience that I will never forget. It was our first time performing Bonnie N Clyde Paris show. Our chemistry was crazy, the energy and connection with the crowd were lit! It was also a very important moment for me because my parents were there too. They got to see me perform for the first time.

Sierra: How do you think female DJ’s nowadays are portrayed in the music industry? Do you believe they are respected and have the same opportunities as male DJ’s?

DJ Anaïs B: It depends on you. There are many types of female DJs. I think females have their place in the music industry of course! There is nothing that a male DJ can do that a female cannot do. Yes, they have the same opportunities and sometimes more opportunities because it’s still rare to see a female DJ In a club (less and less though). And do you know when a party is successful? It’s when the female is dancing, because when the females are dancing then the men dance too, and they buy bottles. So who do you think knows exactly what the women want to hear on the dancefloor more than a woman herself?! That’s how women sometimes win. There is a lot of females DJs who work hard to be more than a pretty & sexy female DJ and that one is respected.

Sierra: You and Moody Mike performed in Miami on October 2nd for a show at the Rec Room. How and why did you guys come up with the name “Bonnie N Clyde Paris?”

DJ Anaïs B: We choose Bonnie N Clyde Paris because we are a powerful couple from Paris with a lot of chemistry. Passionate about music. We are always on the run traveling from a country to another. We don’t rob banks we rob clubs. We don’t spread blood we spread the love… Through music.

Sierra: Name two highlights of your career as a DJ so far.

DJ Anaïs B: It would be l’olympia when we played Bonnie N Clyde Paris for the first time & the Afro-Punk Festival in Paris because it was one of my goals to be part of this event.

Sierra: How do you prepare for a show? What type of technology or tools does one need to be a successful DJ?

DJ Anaïs B: I try at home some mixes. I prepare a playlist of the songs I want to play, but I adapted my playlist to the crowd during the show. It’s not about the technology it’s about how you use it.

Sierra: How did you become the main DJ for the show “Talent Street” in Paris? The show airs on Tuesday’s, is the show live or pre-recorded?

DJ Anaïs B: I was In NY they contacted my manager.  It was pre-recorded during five days. It was very intense. We were recording 4 to 5 shows per day.

Sierra: Do you consider deejaying an art? If so, what is the art of deejaying?

DJ Anaïs B: Yes, the art is to be able to analyze the crowd to the point you know exactly what to play and when to play it. 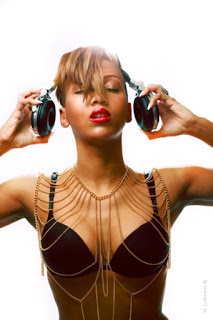 Sierra: What was it like finally performing for the Afro-Punk Festival in Paris?

DJ Anaïs B: It was an amazing experience. Afro-Punk is such a great event for me. I like everything about it. All those talented artists, the ambiance, the diversity, and beauty of the crowd. Afro-Punk Festival have this powerful energy, and I wanna be a part of it. I was very honored to be invited to perform at this event. 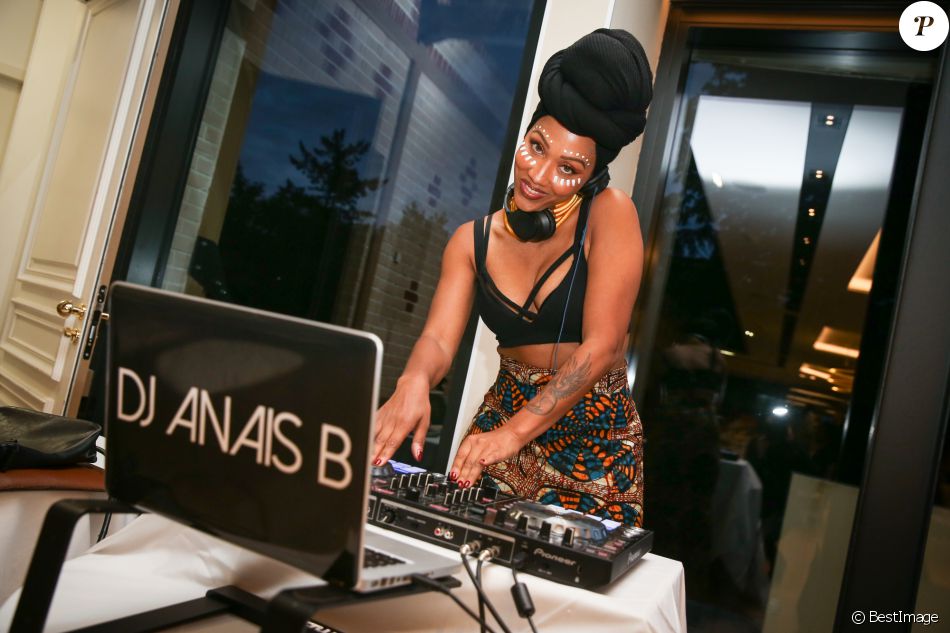 Sierra: What event would you like to DJ for that you haven’t already?

DJ Anaïs B: So many … Coachella, BET Awards, Black Girls Rock, let audiences (huge Hip-Hop festival in Belgium) … I mean all the biggest festivals of Future Beats/ Hip-Hop/ Afro House. I would also like to DJ for big brands or a magazine like Chanel, Dior, Puma, Adidas, Nike, KTZ, Moschino, Vogue Magazine, Colette. 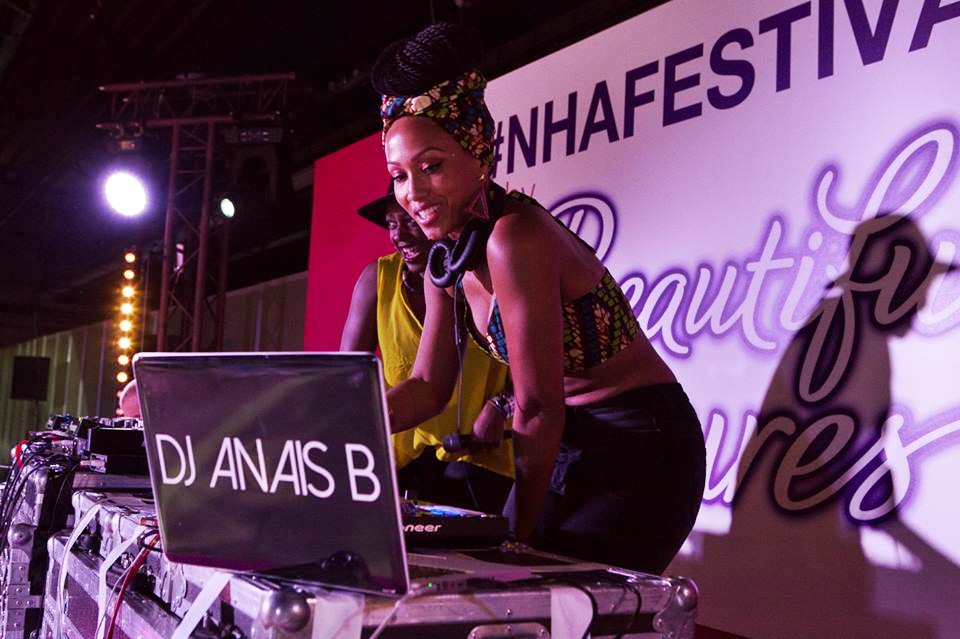 Sierra:  What was it like being featured in Divamag.fr? What do you think the future holds for yourself and other female DJ’s?

DJ Anaïs B: It’s always a pleasure to be featured in a magazine; I appreciate the interest they have in me and my work. My life motto is: “Everything is possible, the impossible just takes longer.” I keep that positive mindset and work to make all my dreams come true. So I know the future holds a lot of things for myself .We would have to talk about this in few years ;-). As for other female DJs I know that women are showing the world that we have our place in this DJ industry and the future will prove it even more so girls let’s keep up the good work!