2K and the NFL announce Their Partnership

Over a decade since their last collaboration, in 2004, releasing the last NFL 2K installment. On Tuesday, 2k has announced a new partnership with the NFL to create new non-stimulation football video games.

The partnership is described as a “multi-year partnership encompassing multiple future video games.” Although these games are only available to PS4 and Xbox consoles, several games and platforms have been discussed including mobile and console offerings – not officially confirmed.

“Expanding the NFL’s presence in the world of gaming has become a focus for the League as we look to grow the next generation of our fanbase and reviving our partnership with 2K was a natural step in that effort,” NFL senior vice president of consumer products Joe Ruggiero said in a statement. “2K is a worldwide leader in sports video games, with a proven track record of creating best-in-class and award-winning games and we look forward to sharing more about the projects we are working on with them in the future.” 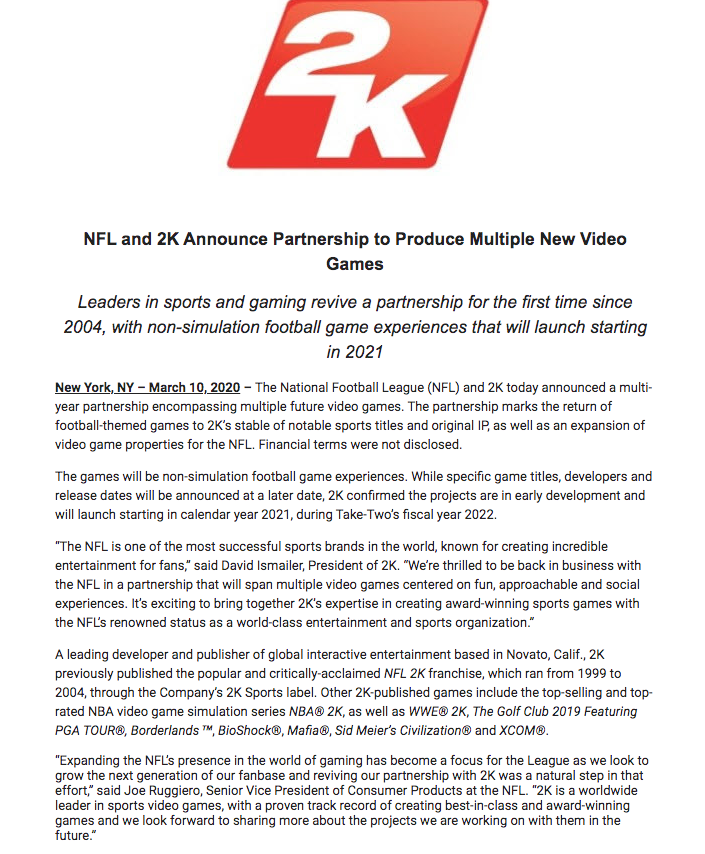 Although 2k will produce “non-simulation” football content, in a separate statement, EA assured fans that its Madden games aren’t going anywhere. EA says its agreements with the NFL and the NFL Players Association remain unchanged. “Our commitment to NFL fans, which spans almost 30 years, has never been stronger, and we’re having our biggest year yet,” EA said in its statement.

As for this most recent announcement, future titles, developers, and release dates are set to be revealed at a later date. But the “projects” are said to be “in early development.” According to a press release, 2K is on track to begin releasing the games starting in 2021.

The NFL 2K series began on Sega Dreamcast from 1999-2004, ending with ESPN NFL 2k5. 2k who’s under the company Two-Take Interactions has produced sport and entertainments games such as 2K and WWE.