What Does Life Look Like for College Football Players During a Pandemic?

The transition to life and academia off-campus has been a struggle for many college students. College student-athletes, however, have seen a stark change in their routines in attempting to prepare for upcoming seasons and professional drafts. Like much of the world population, these athletes have faced challenges and restrictions to their practicing, schedule, and lifestyle.

The football team at the University of Washington is a top-ranked team in the Pac-12 division, and I interviewed some of their top players, getting a closer look at what’s changed over the past year. Edefuan “Ede” Ulofoshio (linebacker), Dominique “Dom” Hampton (defensive back), Richard “Rich” Newton (tailback), and Kyler Gordon (defensive back) described their up-and-down relationships with quarantining, practice and training, past and upcoming seasons, and hopes for the upcoming NFL draft.

As social distancing has become the new normal, working out and training inside facilities has had to change to accommodate the safety of coaches and players. Ede described some of the precautions the team has been taking over the course of the past year, saying “we always have to wear gators. If we aren’t wearing our helmets, we’re wearing masks. And we have these little tracking bracelets that blink red if we get too close to each other, so we always know if we are 6 feet apart from someone. We’re trying to create a space with the most minimal contact possible.” Furthermore, Dom commented on additional social distancing rules, noting it has become impossible for an entire position group to meet and train in one area, as the spacing won’t allow it. He added, “Being able to work out by yourself… it’s a learning curve.” The coaches have also coordinated shifts for different groups to attend workouts, in an effort to minimize contact and upkeep free space. However, this change has resulted in a palpable reduction in team working, bonding, and specialized work. Kyler expressed his disappointment in that the team now has a “tight window, a tight schedule, to get everything done. Everything is really regimented and time is minimized … there’s never time to work on anything extra.”

Each of these athletes agreed with one another, stating that the lack of accessibility to recovery amenities, in-person meetings with coaches, the team nutrition room, and athletic trainers made it difficult to maintain their muscle integrity and fitness to the degree to which they had been used to. “You can’t have too much contact with the trainers, and there’s no access to the recovery, like hot tubs and ice baths, and we can’t shower at the facility either,” said Kyler. Adding further, Ede said, “At this point, we all understand the situation, and you can be a danger to people whether you realize it or not. But accessibility and ability to improve my game became a lot harder because of all of the restrictions.”

Because outbreaks of COVID-19 within the team are almost inevitable, Rich explained the steps that coaches took to minimize the spread of the virus. “The last time there was an outbreak, they (coaching staff) moved us to a hotel not too far from the stadium, and we didn’t play for two weeks because too many players tested positive.” After quarantining at home and in the hotels, Rich noted precautions are still taken outside of the stadium on a daily basis. “We don’t hang out or socialize like we used to. We’re not trying to get sick, so we social distance and stay in the house.”

Each of the athletes interviewed plans to enter the NFL draft after their next fall season. However, the NCAA deemed the 2020 season a “free year,” giving athletes another year of eligibility for amateur play. While Dom is planning on next season’s draft, he explained the importance of the cancellation of this season’s NFL Combine. “The Combine is a big deal because team owners and GM’s come, there’s money on the line, and stakes are high. They hold it in Indianapolis too, which takes athletes out of their comfort zones.” He went on to explain that Pro Day, a subsequent opportunity for NFL prospects to showcase their skills, had not been canceled this year, although this event does not hold as much weight and officiality as the latter. 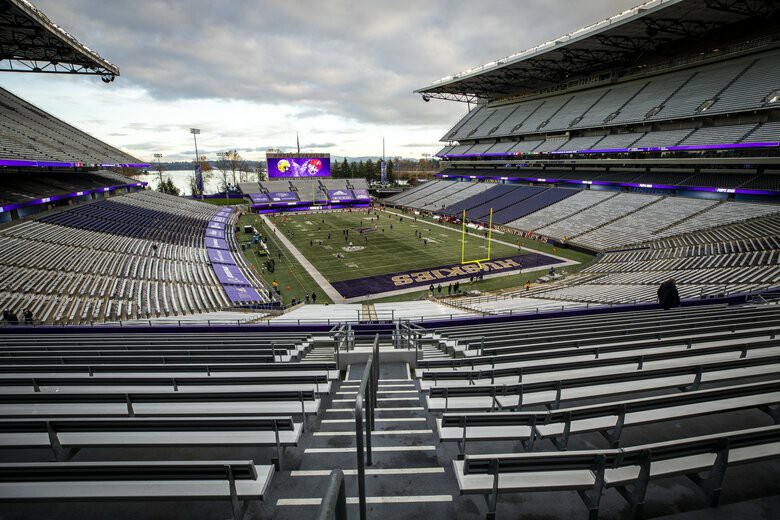 These athletes have gotten used to the roaring crowds of thousands of fans during games. However, COVID restrictions can in no way allow for almost 100,000 bodies contained in close quarters. Each of the interviewees offered a different perspective on this change. Rich recalled his first game during the pandemic, saying it actually felt like more of a scrimmage or practice. “At the end of the day, it’s football, but I’d rather play in front of 70,000 than zero. We got used to it by the second game because it’s football and you have to perform, but I would prefer people in the stands. It almost took me back to my childhood, when I used to play in front of just a few parents.” Kyler added, “I’m really calm and don’t have much adrenaline, it almost doesn’t feel real, and kind of awkward … there’s a huge difference without the fan’s energy.” Similarly, Dom remarked that “big plays just don’t feel as big.”

Life for athletes during this pandemic has proven to be a learning curve, riddled with inconveniences and disappointments. However, with vaccines rolling out frequently, there seems to be a light shining at the end of the tunnel for college football. With Spring-ball approaching in UW football’s future, there is talk of opening up practices and the Spring game to fans once more – of course with many safety restrictions and precautions. While players, coaches, and fans are anxious for college football to return to normal, there’s a trail of smaller steps being taken to restore it.

Previous ArticleGodzilla vs Kong Movie Review: A Match for The Ages
Next ArticleThe Looney Tunes Gang And LeBron James Hit The Court In The New Trailer For “Space Jam: A New Legacy”
NIPSEY HUSSLE TUC RECAP