The History and Hype behind the Luxury Birkin Bag

The latest fashion accessory that many celebrities are collecting like it’s the infinity stones from the Avengers is the Birkin Bag by French luxury goods maker Hermès. This luxury fashion bag has been one of the most popular fashion topics being brought up in 2020. With female rapper Saweetie having her own Tik Tok skits where her Birkin Bags are talking characters, Kylie Jenner showcasing us her bag collection which had multiple Birkin Bags included, and even Singaporean socialite and entrepreneur Jamie Chua being the person with the most Birkin Bags in the world, which her bag collection total is up to 200.

The Birkin Bag or also known as Birkin was created in 1984, the expensive bag was named after Paris-based British actress Jane Birkin. The Birkin Bag history was created due to a coincidental exchange between Birkin and former Hermès chief executive Jean-Louis Dumas on an Air France flight from Paris to London in the early ’80s. Birkin dropped her purse, which led to her belongings in her purse to spill on the floor, it was Dumas that suggested her to get a purse with pockets. This led to Birkin doodling a handbag that she thought was perfect for herself and the rest is history.

When it comes to handbag status, having a Birkin Bag is like being on the top level of the handbag hierarchy. The popularity to own one is seen as a huge social status thing. Many celebrities treat their Birkins like investments, which some will understand why they would. In the year 2019, handbags were considered a more valuable investment than some pieces of art. With the expensive price of a Birkin, you could assume that this bag has more value compared to a Chanel or Gucci handbag. 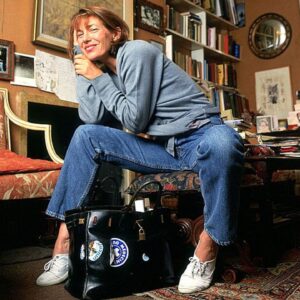 As celebrities treat their Birkins like a high investment, Jane Birkin herself sees it as just another handbag to have to carry her belongings. She is the first to de-chic the bag by adding badges, stickers, and other things.  In an interview with Vogue, the French-based British actress stated, “There’s no fun in a bag if it’s not kicked around so that it looks as if the cat’s been sitting on it – and it usually has. The cat may even be in it!”

Although, when it was first released, it didn’t immediately become a hit until the late ’90s. As time went on, the bag grew popularity. So much popularity that currently attempting to get a Birkin could be very challenging. Even though Hermès offers different bags on their website, Birkin Bags are the only ones that you won’t be able to buy on their website. You can order a Birkin in one of the Hermès boutiques, but ordering one may consist of you being put on a waitlist for whatever Birkin you want. Birkin Bags price ranges from $9,000 to $400,000.   The difficulty of getting a Birkin caused many customers to buy the bags from a secondary source. Which could lead to many people purchasing counterfeit Birkin Bags.

With the conversations of many rappers gifting their girlfriends Birkin Bags, the hype of these luxury bags seems to not be going anywhere. The price continuing to increase and waitlists to even be able to get one is getting longer. With many different designers coming out with different designs for handbags, Birkin Bags seems like it is going to be at the top of the fashion hierarchy for a while.