The Best Dressed at This Year’s Oscars Award Show

Although we may be watching award shows like the Grammy’s, Oscars, and the Tony’s for the results of spectacular awards being giving out during the night, we also seem to pay close attention to the gowns and tuxedos we see on the red carpet. Even though a lot of celebs had to find a matching face mask to go with their expensive designer outfit for the evening, they surely blew a lot of us away with this year’s Oscars red carpet looks. 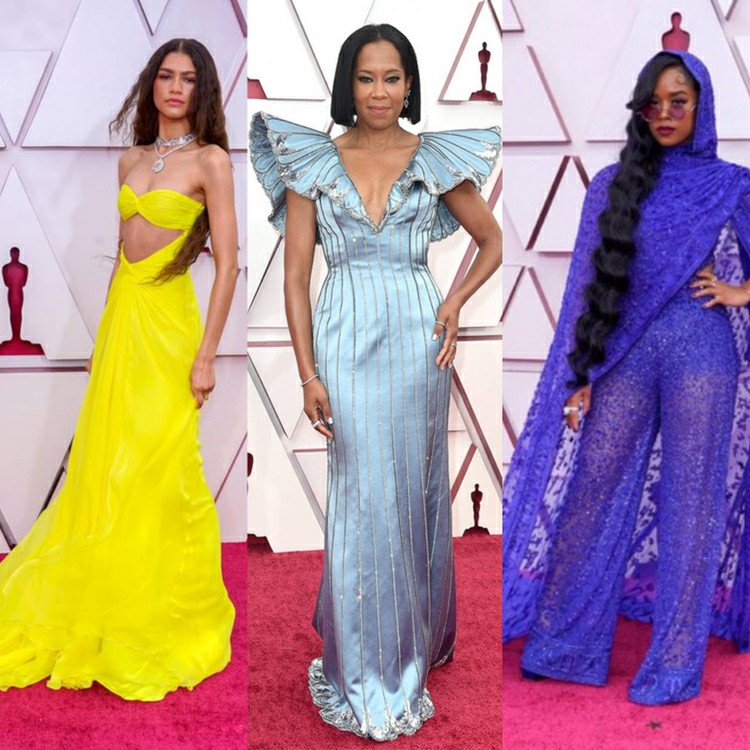 Grammy and now Oscar’s award-winning singer H.E.R stunned the crowd with her purple jumpsuit and signature sunglasses to match. She revealed her outfit inspired by one of her favorite musicians, Prince. Which in 1979, Prince won the same award as H.E.R for Purple Rain.

.@HERMusicx is all smiles after winning the Oscar for Best Original Song.

Zendaya is one of the young celebrities who we already know is going to show up and show out when it comes to her red carpet looks. Zendaya wore a vibrant yellow Valentino gown and paired it with Bulgari diamonds worth $6 million.

Zendaya has arrived to the #Oscars wearing custom Valentino with a matching mask.

Regina King and her styling team seem to never drop the ball when she walks on any red carpet. At this year’s Oscars, she wore a custom Louis Vuitton dress, it went perfectly with the dress code for that evening. Which was described as, “Formal is totally cool if you want to go there, but casual is really not.”

I THINK WE CAN ALL AGREE THAT REGINA KING #Oscars pic.twitter.com/GQAaKy2T04

Ditching the typical suit and tie for the red carpet, Lakeith Stanfield stood out in a Saint Laurent jumpsuit. With newly auburn-colored hair and gold chain, you would think that his goal was to step out of 70s movie. He clearly knew the assignment with this look.

Who said pink is only for girls? Coleman Domingo stepped on the red carpet with a fuchsia-colored Versace suit. The bright-colored suit caused him to stand out among the other male celebrities that graced the Oscars red carpet.

Coleman Domingo in a custom fuchsia Versace suit for the #Oscars The jacket alone had 4500 Swarovski crystals and sequins. This outfit took close to 150 hours of embroidery! Styled by Wayman Bannerman & Micah Mcdonald ⭐️ pic.twitter.com/PhctZZYkdz

With the help of stylist Avo Yermagyn, Leslie Odom Jr ditches the typical black and white tuxedo for a gold-colored to stun the people on the red carpet. With his beautiful wife on his arm, Hollywood can’t wait to see this young talent on red carpets again.