On May 30th, the start of the Charleston Riots was when photographer Paul Chelmis and his girlfriend Jing Wen got the idea of turning something negative into something positive. Or of the words of Wen from Charleston Scene, “Make something beautiful out of rubble.” They had the idea to spin what was seen as violent and negative to an act that could illuminate the deeper issues behind scenes.

The couple wanted to create their own jewelry nonprofit prior to the Charleston Riots. However, it took the night of shattered windows and broken in stores for them to finally get the inspiration behind their jewelry.

The following morning, after the chaos has died down in Charleston, the couple went downtown to start their mission. Their mission is to collect shattered glass, while also helping to clean up the aftermath of the riots. So as many volunteers were cleaning up, Chen and Chelmis were collecting and cleaning so they could finally make jewelry for their nonprofit.

At that time, Chelmis wanted to move his creativity from being digital and working on a computer to being more hands-on. That’s one of the reasons why he wanted to kickstart the jewelry nonprofit. Wen was a high-end jewelry consumer, who graduated from school with a business degree. The couple, both wanted jewelry to be the thing that backed up causes that were important to them. Chelmis and Wen had already had a name for their jewelry nonprofit. The name of it being “Shan Shui“. Which was inspired by Wen’s Chinese roots and heritage.

Wen, being a Chinese citizen with permanent residency in the United States, she stated that she never experienced something like the George Floyd protest before. In the interview with the Charleston Scene, she stated, “When I saw the news about the police station on fire in Minneapolis, my first reaction was, ‘Why burn down a building?’ That doesn’t benefit anyone. But then I realized it wasn’t about the building. It was about not being heard for all these years.”

The couple wanted to make sure that during this nonprofit they could amplify black voices and foster positive change. They sought advice from a close friend named Kanika Moore, who’s a powerful voice in the music scene. Moore was in full support of the jewelry line. Especially when the idea of naming each piece of jewelry the name of an innocent Black person that was killed at the hands of the police. Which led to them naming the line “Wear Their Names” a play off the phrase “Say Her Name“. 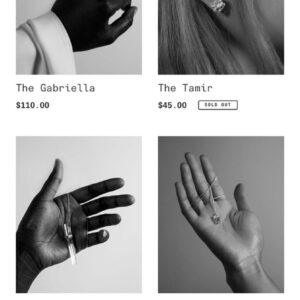 There’s The Tamir (Rice), The Breonna (Taylor), and the list goes on. Profits that would have been made from the jewelry line would be donated to From Privilege to Progress, a national movement working to desegregate the conversation about race on social media.

With their jewelry line launching, it did come with backlash. Twitter has been discussing the topic of people profiting off of many police brutality victims for weeks now. Which both Chelmis and Wen are not the only business owners that were caught in the crossfire of the topic. Both Chelmis and Wen were criticized due to proceeds from the jewelry not being donated to the families of each victim whose name they used.

Also is it just me, or is naming each accessory after victims of police brutality & then pricing them differently, giving…..slave auction-ey vibes??? It’s as if the name attached to the product determines the monetary value of each life. That’s what I’m getting, it’s disturbing.

As of now, the ‘Wear Their Names’ jewelry line was pulled from their website and the Charleston Museum due to the huge amount of backlash they received from social media.