In an unforeseen turn of events, a study on Asian hate crimes was published by California State University that found two Canadian cities, Vancouver and Montreal. Both metropolitan centers are depicted as having the most reported incidents of hate crime directed at members of the Asian community in a study that included most major North American urban centers. Each city is renowned for its high, diverse populations, including ethnic groups whose origins range from Southern to Eastern Asia.

Stereotypically depicted as a country with the most polite citizens, a study by the Center for the Study of Hate and Extremism at California State University in San Bernardino released an infographic depicting Asian hate crime in the Northwestern Hemisphere. The study, allegedly focused on North American urban centers, showed that major Canadian cities were the leaders of total Anti-Asian hate crimes. Two of which even beat out New York, whose own incidents of high profile crimes against elderly Asians arguably began the discussion on violence toward the community. While Toronto, Montreal, and Vancouver made it to the list of top five cities, Vancouver led the margin with frighteningly high statistics of incidents that targeted Asian minorities. 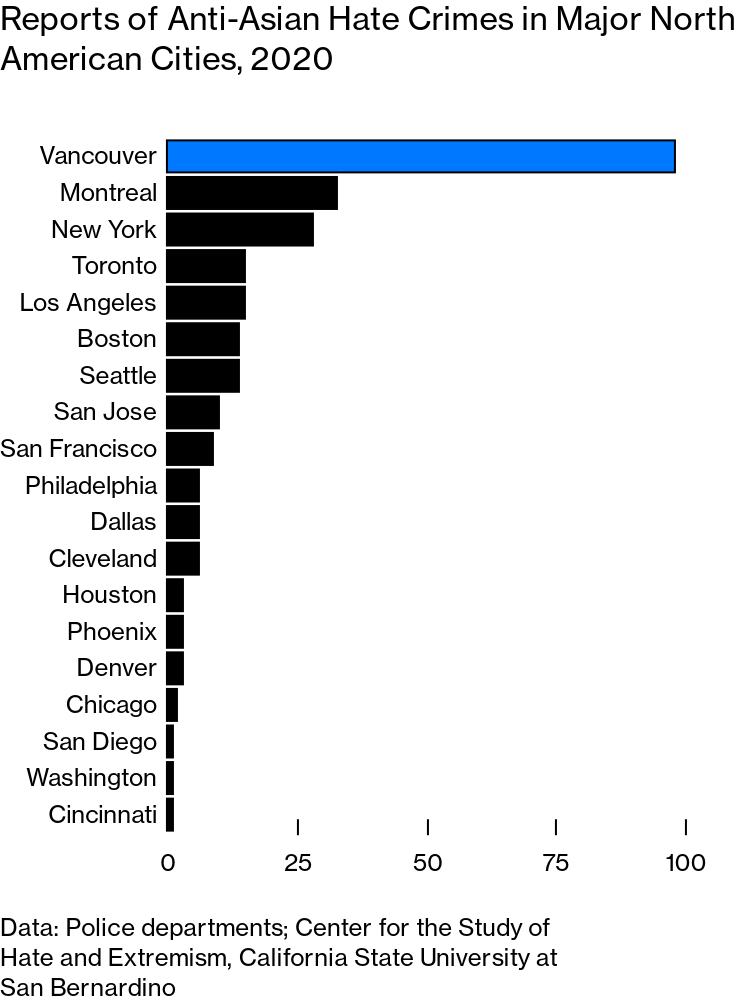 The study seems to define hate crimes as any violent or nonviolent crime that is motivated by prejudice against a group due to ethnicity or religion. After reviewing the fact sheet, it also becomes immediately apparent that the study seems inspired by the COVID-19 pandemic. This possibly means that there is a bias of belief that resentment over the coronavirus having originated in Wuhan, China, with new theories that it came from a government lab, inspired t majority of the most recent waves of hate crimes. The study seems to exclude Mexican cities for an unknown reason; perhaps data was unavailable due to no accurate recording system or the local government’s unwillingness to participate in the study. However, it is undeniable that significant instances of Asian-directed violence have occurred in said country’s history, given the Mexican president’s apology for the 1911 massacre of Chinese immigrants during the Mexican Revolution.

It is verifiable that Vancouver and Montreal have record-high Asian populations, with Vancouver’s population alone being almost half Asian. Ethnic Chinese people as of 2016 make up 27% of the population alone and have perhaps the deepest roots as, like in the US, Chinese immigrants played an important role in railway construction in the late 1800s. However, true hate crimes did not occur, at least in Vancouver, until the 20th century when the Asiatic Exclusion League was formed. The League most famously led a 1921 attack on the local Chinatown and Japantown after it was found that white women were visiting opium dens and having relationships with Chinese men, with Canada’s drafting of its first drug laws coming shortly after.

In the current century, Bloomberg documents that, in Vancouver alone, 98 reported incidents of Asian hate crimes occurred in 2020. Aside from motivations by the perceived involvement of China in the COVID-19 pandemic by white Canadians, Bloomberg alleges that current immigration policies that aim to attract only the wealthy members of Asian countries have to a class resentment amongst their poorer white counterparts. A sentiment that is best compared with that of stereotypes found in Western anti-Semitism.

Though much reporting on said incident has been done, few governments have promoted any worthwhile policies that can alleviate the centuries-old air of hatred directed at Asian communities given new life in the modern-day.

Previous Article"The Last Dance" inspired Derek Jeter Documentary in the Works at ESPN
Next ArticleGinny and Georgia: The Problem with Not Enough POC Writers in the Netflix Writers Room
NIPSEY HUSSLE TUC RECAP