Zendaya Makes History at The Emmys

On Sunday the 2020 Emmy’s were hosted in a slightly different manner, with them instead taking on an electronic format due to the coronavirus pandemic. Jimmy Kimmel hosted them from an empty Staples Centre in Los Angeles, whilst winners accepted their awards over video call. Yet, this unique new structure wasn’t the only history made on the night. 24-year-old, Disney actress turned drama star, Zendaya, broke an impressive record with her Emmy win.

The 24-year-old actress became the youngest woman to ever win best actress in a drama series at the Emmys. She picked up the prestigious award for her sensational performance as ‘Rue’ in HBO’s teen drama, ‘Euphoria’. The show took the US by storm with its hard-hitting portrayal of drug abuse, sex and self – harm; it doesn’t hold back and that’s where its gritty realism helps it thrive. Based on an Israeli series that first aired in 2012, Euphoria draws heavily on lead writer Sam Levinson’s own experiences of teenage addiction. We follow Zendaya’s character ‘Rue’, as she leaves rehab and goes straight into high school. The show has much of that optimism we would expect from a high school coming of age story, however, it doesn’t hold back on the darker, more depressing corners of adolescence. Its exploration of drug abuse is supported through how its bright and vivid visuals are later juxtaposed by more monotone grays and blacks. Furthermore, throughout the show, the color purple sets the tone of the scenes. Purple is crucial in emphasizing the show’s motifs as it’s a color that is made up of two total opposites; red and blue, symbolic of pain and euphoria. Thus, the show’s visual aesthetic parallels the highs and lows of drug addiction within one’s early life, as well as the constantly changing feel of your high school years. It deals with problems that the younger audience can resonate with, as well as utilizing A24’s classic cinematography style that is so beloved by the younger generation. 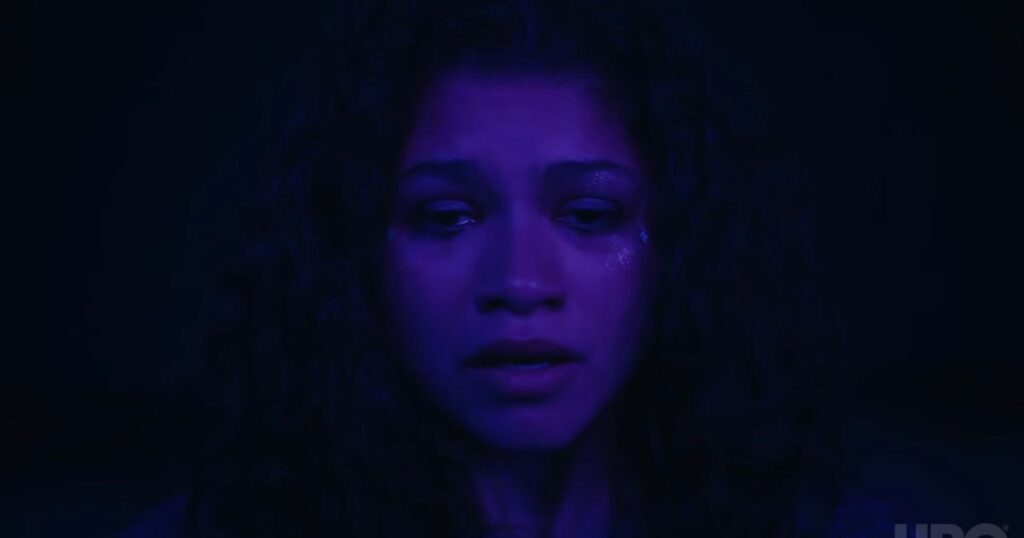 Now when we understand the antithetical complexities of ‘Euphoria’s’ story, it would therefore require an actor with immense range. This is where Zendaya comes in. Variety’s Caroline Framke wrote that the character of Rue “could have been – and sometimes is – a mess of cliched teenaged angst. Instead, Zendaya digs into every corner of her gnarled psyche to find the terrified kid hiding in the shadows.”. Zendaya pulls together so many different characteristics akin to the troubled and unsure high schooler, yet, instead of them awkwardly smashing into each other she constructs a wonderfully refined, immensely layered character. The character is emotionally nuanced and extremely unpredictable, thus, Zendaya’s ability to carefully control and harness the essence of Rue is incredible. With this sensational performance, we can expect to see her career skyrocket into a stratosphere of acting success.

One of the most impressive aspects of Zendaya’s Emmy win was that she inched out actresses who are decades older than her, and subsequently much more experienced. Jennifer Aniston, Olivia Colman, Sandra Oh, and Laura Linney were all in the running for the award, yet Zendaya pushed them all aside to make history. In doing so, her award has demonstrated more than just her own acting talent. It has marked the entrance of a new wave of young and feisty actors who are taking the industry by storm and competing with Hollywood’s old guard. In her acceptance speech, she stated that “there is hope in the young people out there”, in turn, emphasizing the importance of the next generation not just in acting but within society in general. Especially in Hollywood, we have seen a recent surge in exceptional young actors. The likes of Milly Bobby Brown, Timothée Chalamet, and Ashton Sanders have exploded onto the entertainment industry, demonstrating the enormous potential of the youth. With her recent award, Zendaya has established herself as a figurehead of the next generation of film and TV; she has inspired the youth and shown those established actors within the industry that it’s time to take the new guard seriously.

Having started out as an actor for the Disney Channel, in shows like ‘KC Undercover’ and ‘Zapped’, Zendaya has vastly developed as an actor over recent years. She’s set to star in another Spider-Man movie next year, as she reprises her role as MJ. There’s even talk of her playing Vernita Green’s daughter in ‘Kill Bill 3’. With her career ahead of her, it’s likely we’ll see her accepting various other awards in the future.