Talented rapper, Juice world AKA Anthony Jared Higgins, dies after having a seizure at the Chicago Midway airport.

After a Sunday morning flight from California, witnesses say they saw Juice suffering from a seizure in which after being rushed to the Cook County Medical Examiner’s Office he finally gave up the ghost.

An autopsy was performed, but the cause of death has not yet been determined.

This day seemed to be an ordinary day. According to TMZ, footage was shown of juice in high spirits before his death.

Although this news took us by surprise, Juice released an EP on June 19, 2018, called ‘Too Soon’ in which he prophesied that he would not be making it passed the age of 21.

Juice’s birthday was on Dec. 2 in which he celebrated his 21st birthday for the whole week. In his Instagram post, he was seen with his friends in what looks like a yacht and he looked healthy. 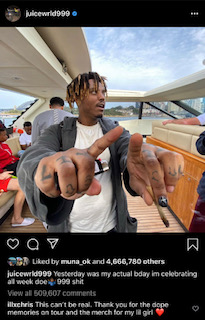 Juice’s career was just taking off after his song ‘Lucid Dreams’ took to the top of the charts in 2018 and made #2.

Interscope later signed him to a multi-million contract in March 2018, after which he released his ‘Too Soon’ EP.

It’s a shame to see this singer/ rapper go at the peak of his career. According to CNN, Interscope Records said that he was a gentle soul, whose creativity knew no bounds, an exceptional human being, and an artist who loved and cared for his fans above everything else.